The Grasshopper suit has enhanced legs, which allow the wearer to leap long distances. This may be enhanced by the Maximum Jump feature which launches the wearer into orbit. Unfortunately the suit does not protect the wearer from the rigours of exposure to vacuum.

The legs can also deliver a devastating kick. The armour also has zoom lenses, and “Insectroid” senses, which warn him when crimes are in progress nearby.

While the armour does provide a limited amount of protection from damage, it wasn’t enough to survive a serious battle.

Working as a researcher at Roxxon’s New York plant, Doug Taggart moonlighted in his costumed identity as a security specialist for Roxxon. It’s unknown whether the suit is of his own design. He was excited to be placed on Cindy Shelton’s research team. He also hoped to win her over as Doug Taggert, or at least work out why she had such a mad-on for the Grasshopper.

During a patrol of Roxxon facilities, only two weeks into his career, Grasshopper happened upon Batroc’s Brigade trying to steal components. He fought them off with help from the Great Lakes Avengers – who were in New York looking to recruit.

Grasshopper excitedly accepted their membership offer during battle. That was seconds before Zaran the Weapons Master threw a three-pointed sai at Doorman. The weapon passed through Doorman and hit Grasshopper right between the eyes, killing him. He retains the notable record for the shortest membership on any super-team: 5.8 seconds.

Some time later, the Grasshopper suit was acquired by Roxxon security guard, Neil Shelton. During a patrol of the labs on Christmas day, he stopped Killer Shrike (himself a former Roxxon employee) from stealing “Project Z”. Dr. Cindy Shelton appeared, to take the “Project Z” device back. She also invited Grasshopper out to dinner, unaware he was her long lost brother.

He declined, and used the suit’s “Maximum Jump” facility to make a dramatic exit.

He was unaware that it would launch him into orbit, where he quickly died. His death wasn’t completely in vain, as his body’s re-entry becomes a beautiful Christmas shooting star.

A third individual appeared in a Grasshopper suit, arriving at the GLA’s headquarters probably seeking membership. Unfortunately Deadpool had just been kicked out for being a slob and the mercenary twisted Grasshopper’s neck in irritation, killing him.

All wearers of the suit seem eager at superheroing, and jump into action without hesitation.

“Nobody gets a leg up on the Grasshopper.”

The grasshopper suit was later taken up by Neil Shelton: 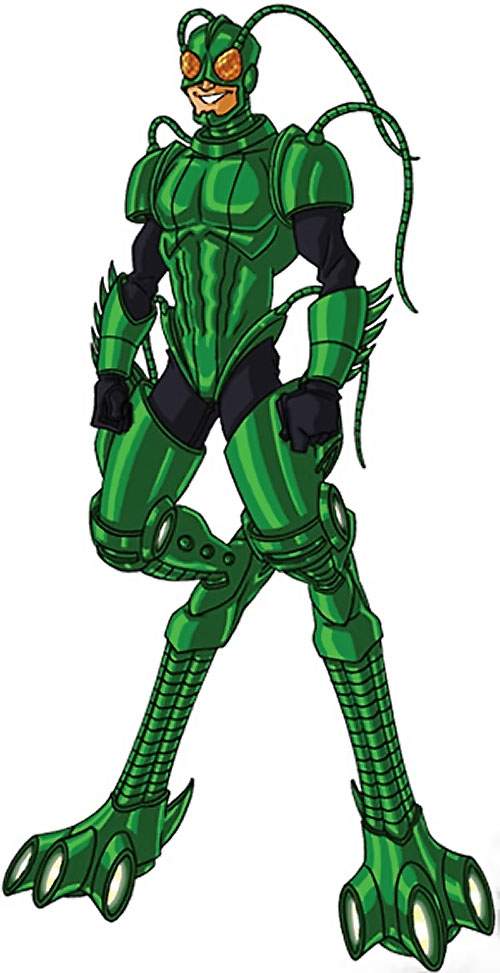 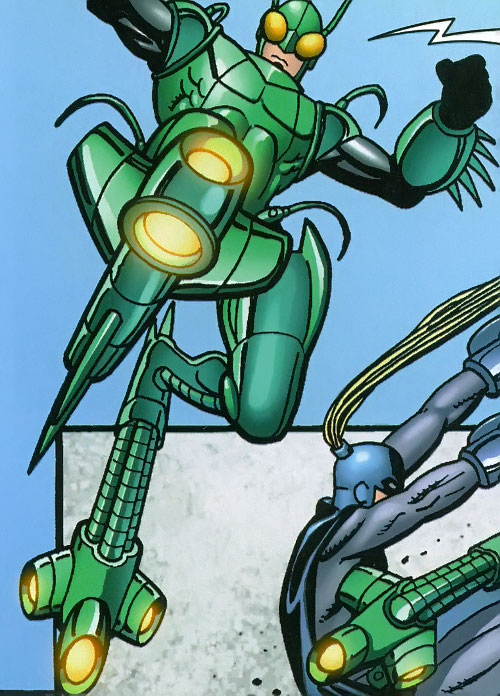