Gravity can manipulate gravitons, allowing him to exert force on physical objects that he can touch. So far, he has learned to use this ability to:

He is otherwise a fit but unremarkable young man physically. He is currently studying business, but has thus far has only demonstrated knowledge of some basic marketing concepts.

Greg Willis was an ordinary Wisconsin teenager until his 17th year. That year, he went out sailing with his parents on their yacht. Greg was swept up in the winds of a mysterious storm that appeared without warning. He was then struck by a burst of energy before falling into the water.

After the incident, which Greg thinks of as The Accident, he discovered that he could manipulate gravitons for various effects.

When he graduated high school, he began attending NYU. He hoped to start an intellectual property management firm, with his primary client being his own superheroic identity, Gravity.

Greg’s initial forays as Gravity left much to be desired. His first “team-up” ended ignominiously when he mistook Rage for the bad guy and was almost killed by the real villain, Black Death. If Rage hadn’t quickly recovered from Gravity’s punch and frightened off Black Death, Gravity’s career would have ended before it began.

While he was making some friends at school, Greg’s focus on his ambitions was raising barriers in those relationships. His heroic career was going well however. Gravity confronted and beat the Rhino, though it was a near thing indeed.

After the beating he took from Black Death, Greg fell into a depression. He retired Gravity, feeling that risking his life for an ungrateful public was not a worthwhile endeavor.

His spirits were eventually lifted by the efforts of his classmate and friend Lauren Singh, though he still did not resume his superheroic identity. Greg began dating Lauren and focusing on his schoolwork for the next few weeks.

This vacation of sorts ended when Gravity was literally called out of retirement by the Greenwich Guardian. The Guardian was leaping from rooftop to rooftop near the NYU campus shouting his name. The Guardian explained his disappearance as a necessary retreat after being severely wounded by Black Death.

The Guardian had discovered that Black Death planned to steal an experimental seismic pulse generator. He would then use it to randomly demolish New York buildings. He convinced Gravity to steal the generator first in order to lure Black Death into a trap. The Guardian also asked Gravity not to call in other heroes because he wanted the two of them to take down Black Death themselves.

Over the following weeks as they waited for Black Death to show up, Gravity and the Greenwich Guardian went patrolling every night. They were a successful duo, taking out gangs of local thugs as well as supervillains such as the Shocker and Whirlwind.

Greg’s social life suffered greatly as a result of his new obsession with superheroics. Lauren dumped him and he was failing all of his classes, but he still dedicated almost every waking hour to being Gravity.

Finally, the Greenwich Guardian brought Gravity to an abandoned warehouse where they could ambush Black Death. Gravity then got two nasty surprises in rapid succession.

Gravity managed to break loose. After a tough brawl he finally defeated Black Death, whose unconscious body promptly evaporated into thin air. In an affirming coda to the fight, Spider-Man (who had been swinging by and saw the tail end of the fight) complimented Gravity on his handling of the situation.

Having grown from his experiences, Greg began to take a more balanced approach to his life. He started repairing his personal relationships and working on making up his missed schoolwork. He still protected the neighborhood as Gravity, but he didn’t let it take over his life this time.

In his civilian identity, Greg looks like a typical fresh-faced middle-class young White male, dressed in the usual casual wear of a college student.

As Gravity, he wears a blue suit with white over the shoulders, along the outside of the arms and legs. The cowl is white and leaves his lower face exposed. On the chest overlapping the line where the white shoulders and blue midriff meet, there is a gravity symbol. It is a yellow circle with a black border from which four arrows (one at each corner of the compass) point inwards.

Several observers mistook the gravity symbol for an “x” and thought Gravity was affiliated with the X-Men.

The gloves and boots are also white, with the boots having a blue stripe running down the middle; unlike most superhero costumes, the pants legs are drawn over the boot tops instead of being tucked into them. The finishing touches are blue kneepads, a gray belt with round golden buckle, and golden fish-eye goggles similar to those worn by the DCU’s Blue Beetle II.

Sometimes Gravity’s use of his powers is accompanied by a glowing blue aura around the point of focus. Examples include a glowing field around his fists when he throws a punch or a lingering trail of liquid-like streaks behind him as he flies.

This is not consistent however and may be a sign that he is putting forth extra effort (in DC Heroes RPG terms, when he is Pushing his Powers or spending HPs to raise their AV/EV/OV/RV).

Greg was an ambitious young man with dreams of fame and fortune who ran head-on into the real world. He became depressed over the obstacles he found in front of him and the coarse nature of life in the city. As a result, he considered leaving both superheroics and New York to return to the family business in Wisconsin.

He overcame this crisis of faith and is now working hard to accomplish his dreams again with more realistic approaches. He’s still not sure if he’ll make it. But he believes the important thing is to try his best to achieve whatever he can and to appreciate what he can learn about himself in the process.

During his first few months as Gravity he was very unsure of himself as a hero and tended to respond very strongly to the reactions of others. He was shaken by criticism, became giddy when praised, and was even somewhat desperate for the Greenwich Guardian’s friendship and guidance.

He has fortunately learned to be more self-confident and can now consider compliments and criticism more objectively, putting them to constructive use without being unduly influenced.

“A team-up ! My first time’s gonna be a team-up. This *rules*. I can’t believe I’m networking already.”

“I really did want to spend time with Lauren… but I had to remind myself I didn’t come to New York to find a girlfriend. I had a plan set in motion. A dream to chase. And if I wanted to take advantage of *any* momentum that press coverage might have gotten me. The time was now.”

“What kind of person would I be if I didn’t try to rise above my mistakes ?”

Gravity met with Booster Gold and convinced him to take the young man on as an intern. Gravity thus became a combination office gofer and sidekick to Booster and Beetle during some of their misguided business ventures. He eventually left them to strike out on his own, possibly working with teen groups such as the Titans or Young Justice.

Gravity was unprepared for the realities of life in the big city or the travails of being a superhero. When he started his career as Gravity, his Mind and Spirit were both 03, he only had 30 HPs, and he had the Drawbacks Innocent and Uncertainty.

The HPs he earned fighting numerous supervillains and street thugs plus the learning experiences he had leading to his final battle with Black Death raised his stats to their current level and helped him buy off his Drawbacks.

Since Black Death tricked Gravity into stealing a very expensive device while under surveillance by security systems, Gravity may end up with the Mistrust Drawback in the future. Assuming this occurs, it could be an on-going part of the character for some time much like it was in Spider-Man’s early career or it could be a short-term Subplot.

Since his powers are based on gravity manipulation rather than mental energies, further development of his powers will likely follow a different path from that of most telekinetics. Likely candidates include a graviton-derived Mental Blast (which he may have already used as a Trick Power at least once), Gravity Decrease or Increase, or Snare.

Force Shield may be expanded to a more complete protective aura such as Skin Armor or Force Field. 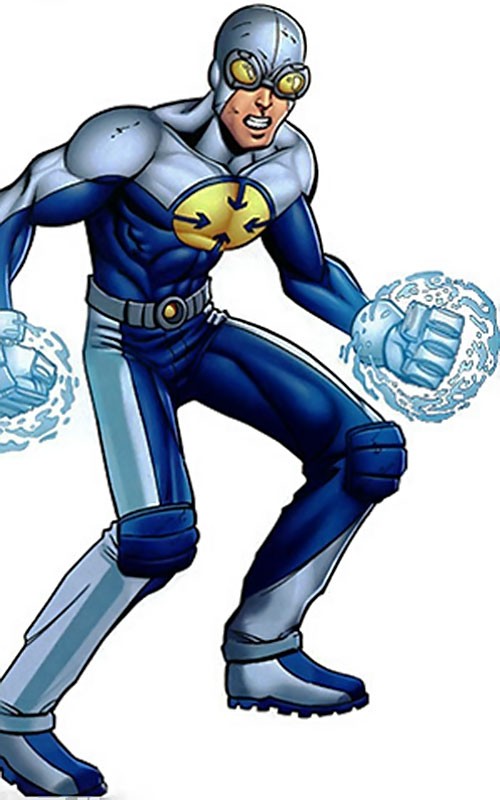 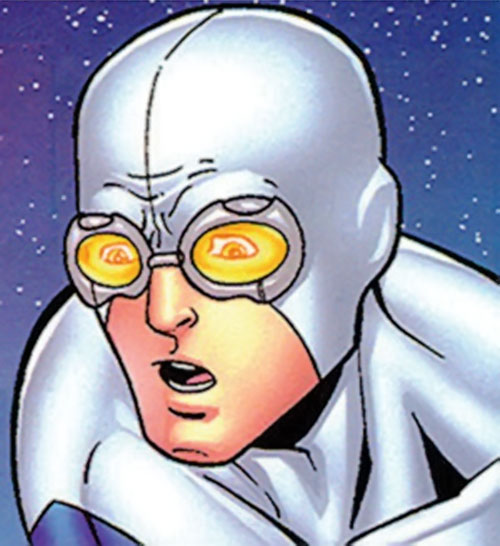 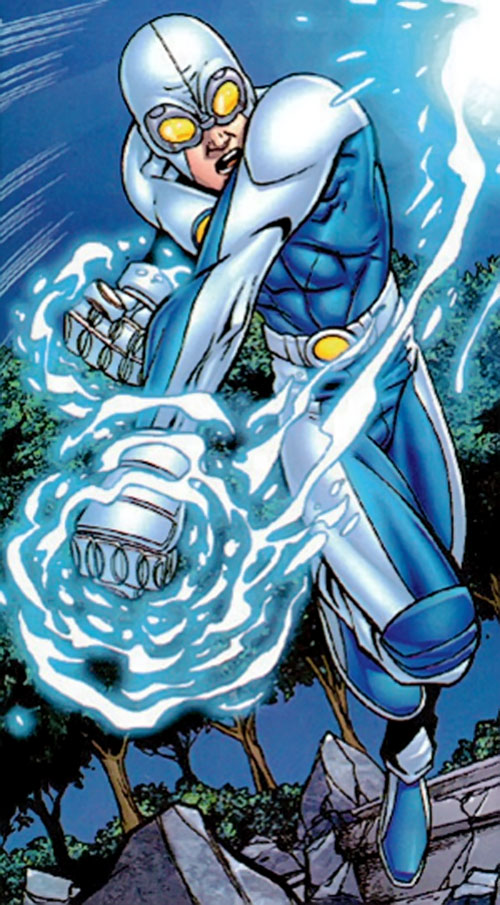 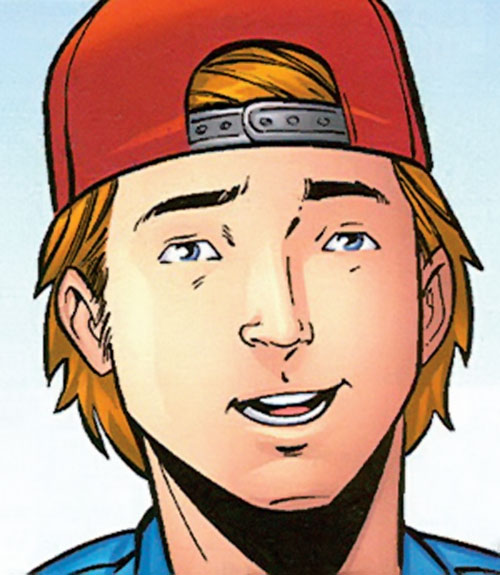