Gray is an experienced criminal, a feared leader and a real tough guy.

He’s resourceful, excels with cars, trucks and firearms, and a dogged fighter.

Gray also has extensive connections throughout Chicago and across several mobs.

His skills are at a cinematic /action hero level (about John McClane’s level, though with less plot immunity), and he’s aware of it. This encourages him to take huge risks and to be on the frontline of his field operations. This daring is part of his mystique.

His preference for high-risks, high-reward schemes makes his income unpredictable, though. A big failure might leave him penniless, and big success rolling in cash.

He also excels at bribery. Thus, Gray is confident that’ll always find a cop, a corrections officer, a two-timing wiseguy from a rival mob, etc. to cut a deal with.

Gray possesses astounding physical endurance. In DC Heroes RPG terms, he keeps most of his Hero Points  for Last Ditch Defense and has a high BODY for the Genre.

He survived having his hand shot off, didn’t really react to taking two 9mm rounds in the shoulder, and successfully blocked a half-dozen .25 bullets with his forearm. Though for the latter, one notes that part of his forearm is reinforced by the base of his prosthesis.

Generally speaking, low-calibre bullets cannot seriously hurt him if they do not hit an important organ. He could even take a kick from Bean Bandit.

After losing a hand to Larry Vincent, Gray has it replaced with a hook then with a sort of huge sabre. The blade is 13” long, weighs 3 pounds and is made of CV-34 steel. It could cleave right through Larry’s Sig P-210.

A car suspension spring was also installed to turn the blade into a projectile weapon. This spring is powerful enough to drive the blade through Bandit’s humongous armoured jacket.

Gray has also used firearms such as a MAC-10 9mm machine pistol (with suppressor), an unspecified 12-gauge pump gun, an Amsel Striker “Street Sweeper” variant and a COP .357 derringer.

Vehicles included a Volvo semi, and a beat-up Chevrolet van with a Corvette supercharged engine. The supercharger’s air intake could pop up from the hood to be engaged. This van could do at least 150 mph, and more probably 175 or so. Both vehicles were lost whilst deployed.

Furthermore, specialised weapons (such as sleep gas grenades or a scoped, silenced .44 magnum Desert Eagle with HP bullets) will usually be available.

Most of these men are just competent muscle, but some are experienced, professional killers.

Gray appears to be an ambitious, experienced criminal without a set speciality.

He apparently ran a cocaine smuggling ring through the Northeast US for a while. But he also attempted blackmailing cities or raiding rival mobs to take their stuff.

During the early 1990s, Gray attempted to blackmail the city of Chicago with a bomb. But the police found it and disposed of it in time.

The first could be found, but was too sophisticated for the police’s EOD team and killed them all. Gray then made his demands for $20M. He pretended to represent a Middle-Eastern terrorist group.

However, Takisawa had been wanting to go straight, and his girlfriend Minnie-May Hopkins convinced him to help disarm the bomb with the help of her associate, bounty hunter Larry Vincent.

Furthermore, the transporter Bean Bandit discovered that the dope he had been hired to deliver to Gray was actually a cover for the bomb. He therefore came for Gray as this constituted a breach of contract.

Even Gray couldn’t fight these odds. Though he managed to start the countdown on the bomb Larry Vincent shot him with her 10-gauge. Gray somehow survived and crawled away in the confusion, but his left hand had been torn away by the buckshot.

Takisawa and Hopkins disarmed the bomb with seconds to spare.

As a result, Gray’s budget was axed by his superiors. He bought off police heat by promising the chief of police that he would sell out his old cocaine smuggling ring. Given the payoff, the corrupt cop also provided some cover for his activities.

Gray decided to rob another mob. It seems that the plan was to pretend to buy cocaine from the Max gang, which operated both in Chicago and L.A.. During the exchange, Gray and his men would kill the sellers and loot the large shipment of coke. However, without a budget they couldn’t buy the assault weaponry that they needed.

He and his crew started robbing gun stores using sleep gas. They lucked out when they randomly attacked the Gunsmith Cats shop. The shop turned out to be a treasure trove and Gray recognised the captive Hopkins, whom he wanted to interrogate about Takisawa.

However, Minnie-May and her friend Becky Farrah escaped using improvised explosives. They even stole back Gray’s semi and its trailer full of stolen guns.

Gray learned that the police had offered to take Larry Vincent to an isolated safehouse, as they expected a revenge attempt against her.

The chief of police had Vincent’s car bugged at Gray’s request, and the mobster engaged the bounty hunter in an auto duel. However, Hopkins realised what was going on. She warned the PD, who sent a patrol helicopter after Vincent.

Gray did intercept Larry. When the helicopter showed up he used a grenade taped to his ejectable blade to shoot it out of the sky. Gray was about to eliminate Vincent when Hopkins, who had survived the helicopter crash, used explosives to force him to surrender.

Gray was arrested. But the chief of police threatened to investigate Minnie’s illegal demolition charges. Larry thus agreed to remain silent if he dropped the matter.

Vincent was worried, as Gray had been arrested too easily. He seemed to think he could leave prison whenever needed. And it soon became obvious that he could also run his mob from his cell.

Two of Gray’s men leaked info to Becky Farrah to set a trap for Hopkins and Vincent. But that narrowly failed. A few days later, a hit on Ken Takisawa in L.A. was apparently successful. However, the demolitions expert had actually faked his death using sophisticated stratagems.

Two other operatives tried to kill Vincent while she was hospitalised, but failed and were arrested.

Directing his remaining men from his cell, Gray executed on his plan to steal the Max gang’s cocaine. But one of the Max mobsters survived. When he was arrested by Larry Vincent he bartered with her by promising information as to Gray’s whereabouts.

Gray sent two hitmen after him. However, Larry and Minnie-May took them down and tricked the Max made man into telling them when Gray would escape.

Gray did break out of prison, having hired the Bean Bandit as his getaway driver. He also kidnapped Minnie-May just as she located Bandit’s car. Though Larry Vincent actually intercepted Bean, Gray used Minnie as a hostage to have Bean steal Larry’s car and continue their run. They reached an harbour in New York City, where Gray could leave for Canada.

As Bean left with Minnie, Gray demanded to keep the diminutive bounty hunter as his prisoner. He then tried to kill them both when Bandit refused. However :

In the brutal ensuing fight, Gray almost killed Bandit but was narrowly stopped by Larry. Vincent then put a score of 9mm rounds in Gray’s chest, killing him.

Several months later, Gray’s son attempted to gun down Larry Vincent to avenge his father. But she easily shot his gun out of his hands and arrested him.

Gray is a vigorous, daring, dynamic man. He acts more like a warlord than a convention mob boss. His strong emotions make him even deadlier and more determined. And he nurses grudges like nobody’s business – though most opponents of Gray are unlikely to survive their clashes.

He’s used to making his way through ultraviolence, intimidation and bloodthirstiness, and has a huge ego. Gray rules through fear, ruthlessness and being willing to kill anyone for any reason.

Gray also will betray anybody, anywhere over anything as he’s confident in his ability not to leave witnesses of such actions.

(Shooting his Street Sweeper into Bean Bandit’s chest) “Lemmee see… you took that hook to your stomach when you hit the deck… plus nine twelve-gauge slugs. Maybe you got the best damn bulletproof jacket in the world… still, it’s gotta feel like someone ran your gut through a gravel crusher. So I call this a mercy killing !” (raises his blade)

Bonuses and Limitations:
Skin armour is Form Function, Contingent Upon BODY, and only works against firearms.

Advantages
Area Knowledge (Chicago), Expertise (Bribery), Rank (the equivalent of a Sergeant, as he’ll usually have about 10-12 soldatos working directly for him in various roles). 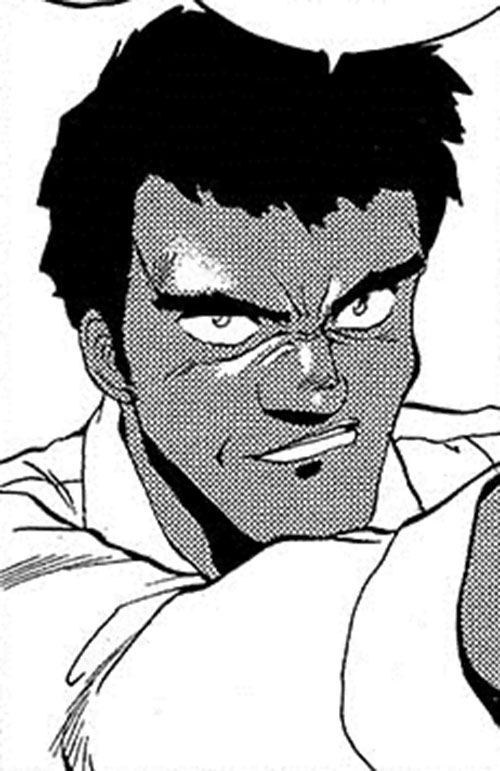 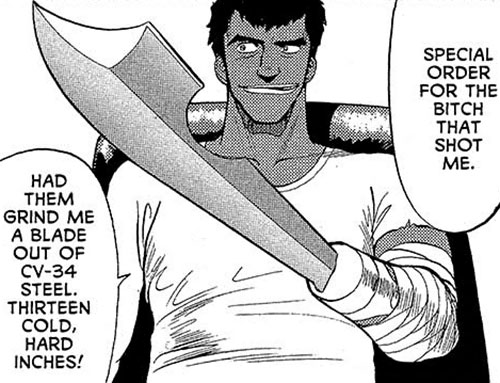