The Great Video has “x-ray vision” – just like Superman, but not blocked by lead.

He can see the content of opaque containers, the skeleton of living persons, gaze through walls and floors, etc.

This is selective, as he can apparently filter in and out types of material to look for something specific (e.g., precious metals) and see through anything else. He can distinguish small things at a superhuman distance when he does that.

The Great Video can also amp the power of his gaze. This attack was able to fell even Marvel Boy, or kill an elephant.

However, long, repeated exposure to Vance’s gaze is toxic, resulting in potentially fatal X-Ray burns all over. It takes about two weeks for the buildup to have fatal effects on a human being – less for small animals. This is 1950s comic book radiation poisoning – the subject just suddenly dies when the fatal dose is reached.

The cranky, aggressive professor Vance was researching radium and X-Ray radiation when an accidental explosion engulfed him in his lab. Though Vance briefly thought that he had been blinded, he somehow developed X-Ray vision.

Astounded, he decided to use his abilities for personal gain – though his odd plan may be a hint of brain damage. Vance set up a stage show in a movie theatre as the Great Video, accurately guessing everything the audience had in their bags, pockets, etc. by ’reading their mind‘.

He also had hired thugs to rob the members of the audience who carried valuables in a nearby back alley as they left the theatre.

Marvel Boy (Bob Grayson) intervened to stop the scheme. During this case the Great Video discovered that the radiation from his eyes could kill, when a dog (possibly Vance’s pet) dropped dead from accumulated exposure. He swiftly used his newfound power to knock out and nearly kill Marvel Boy.

This discovery aggravated Vance’s megalomania, and he decided to become a mob boss using his ability to case crime targets in complete safety. He used his eyes to kill an elephant to impress criminals, then had his new mob perform robberies.

Since the Great Video could tell them beforehand exactly where were the valuables, the alarms and the like, the thefts all went flawlessly. The gang was dubbed “the wonder gang” by the press. 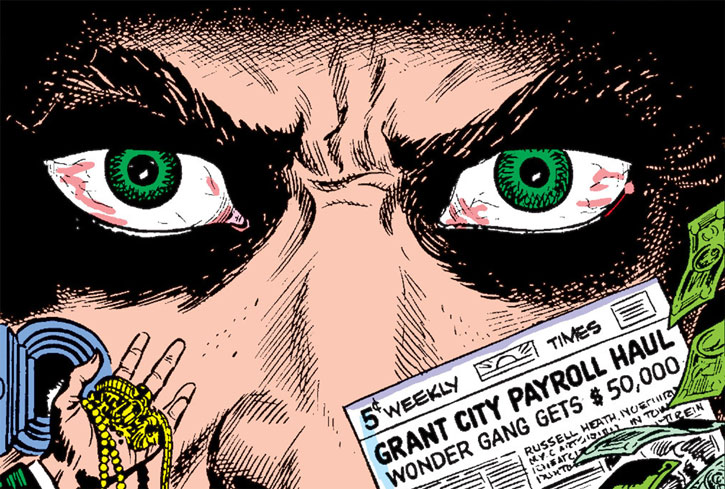 However, Grayson deduced that Vance was behind the “wonder gang&rdquo. Along with the police, he set up a trap. Marvel Boy blinded the Great Video and his gang with a burst a light from his bracers, then punched Vance out.

The flash and the blow apparently destroyed Vance’s X-Ray vision, as the Great Video could not induce anything special by staring hard at the cops who arrested him.

This was the one and only period appearance of the Great Video.

The Great Video also appeared in a famous alternate timeline, that of the G-Men or “1950s Avengers/Atlas Avengers”. Albeit this timeline was destroyed it is known that similar ones still exist. On Earth-616, the Agents of Atlas are something of an echo of this timeline, and it is possible that the Great Video clashed with some of them.

In the G-Men timeline, the Great Video’s X-Ray vision was restored by alchemical elixirs provided by the Yellow Claw. It was presumably in return for this that the Great Video worked for the Claw, along with Skull-Face, the Soviet robot Electro and the Cold Warrior.

The villains successfully kidnapped the President and killed several Secret Service men. However, they were then stopped by the newly assembled G-Men. Albeit the Great Video almost managed to kill 3D-Man, he was punched by Marvel Boy then knocked unconscious by Gorilla-Man.

In 2006, the deranged owner of an independent video store set his own store on fire, as he could not compete with the big chains. He was accidentally wounded in the fire, and somehow developed powers very similar to that of the Great Video.

The man’s name is Paul Vance. This may very well indicate some sort of connection — for instance as the grandson of Professor Vance, having inherited both his powers and his insanity. Vance is usually listed as the second Great Video due to the similarities.

Vance was seemingly made insane by his accident – or maybe by the power he gained. He was obsessed by using every mean to accumulate power and money, though his plans were not always entirely rational (setting up a stage show ?).

“I can’t be bothered by your stupid observations ! What’s happened to me is unique in scientific history !”

“I see through everything ! Through wood and steel ! The content of closets, drawers, bags ! Even the human body ! Some mysterious accident has given me X-Ray vision ! I’ll be the richest man in the world !”

“There is no one in the house, no burglar alarm, and the jewels are in the upper left drawer of the dresser, in the green jewel case !”

The Great Video could a villain who capitalised on the 1951 forced retirement of the Justice Society of America. However, he was taken out by a retired Miss America using the last of her fading powers.

Drawbacks:
MIA toward Power, Minor Physical Restriction (Cell Rot is Always On at a very low output). In at least one timeline, the Great Video eventually developed a Minor Rage as his issues worsened. 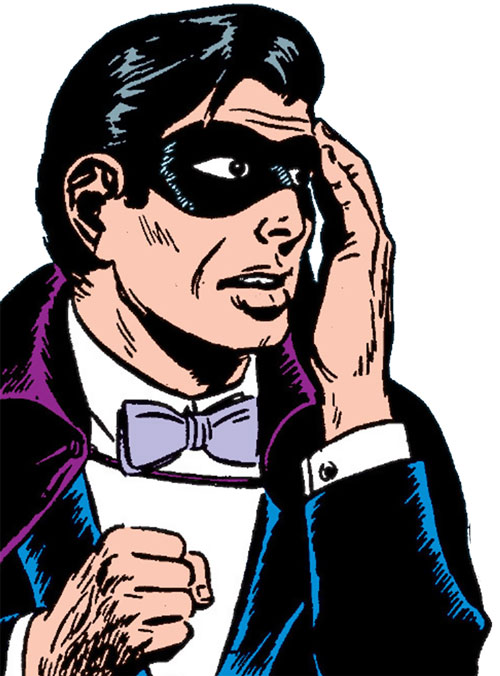 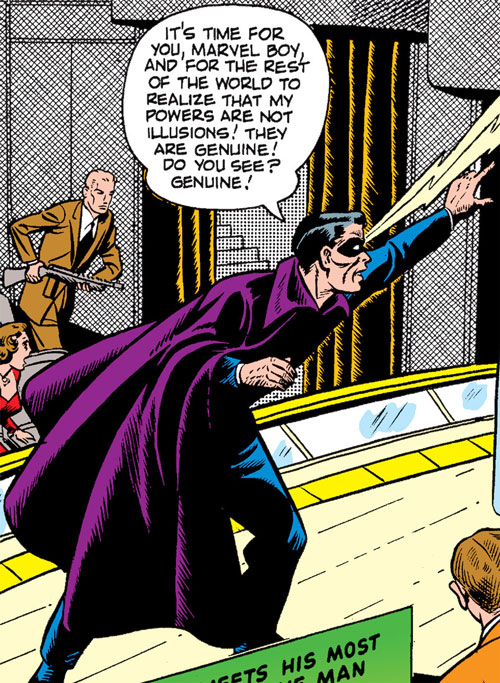 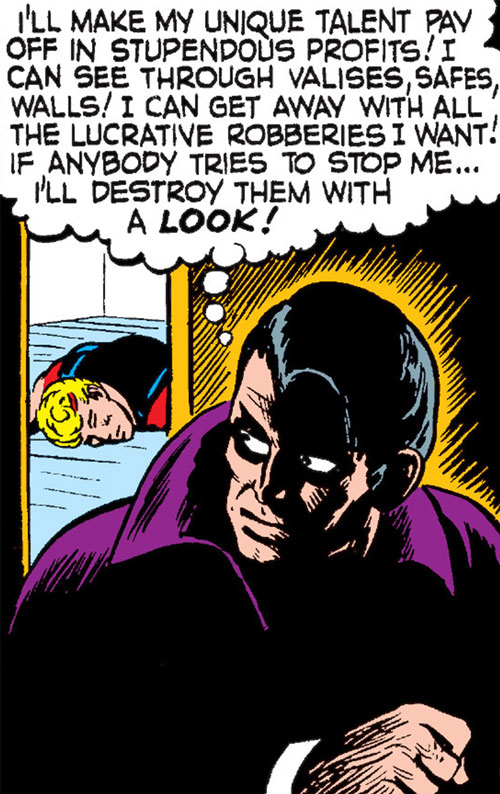 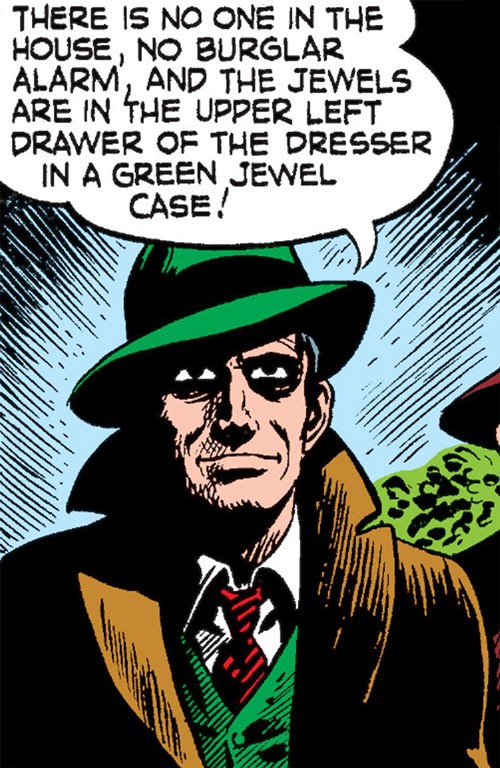