A Great White Ape is a gorilla-like primate with white fur, and standing about 15 or 18 metres tall. It presumably weighs in the 220-to-280 tonnes range.

Such an ape is a skilled hand-to-hand fighter. Its immense reach, strength and mass allow him to take on giant dinosaurs and win. A pack of mega-carnosaurs can kill a Great White Ape, though.

Great White Apes have a peculiar rapport with human beings. They feel compelled to rescue endangered humans, and are skilled at reading human facial expressions and body language. They can even guess how simple human machines (such as a glider) work.

They are also at least as intelligent as a smart gorilla.

Cave paintings there, made by unknown persons, depict these apes saving Humans from mega-dinosaurs. Why the Apes have such an affinity for Humans is unknown.

The first chronicled encounter with a Great White Ape took place during World War Two. CPT Richard Montgomery Flag’s PT boat, trapped on Dinosaur Island, was barrelling down a river to reach the ocean and sail away. 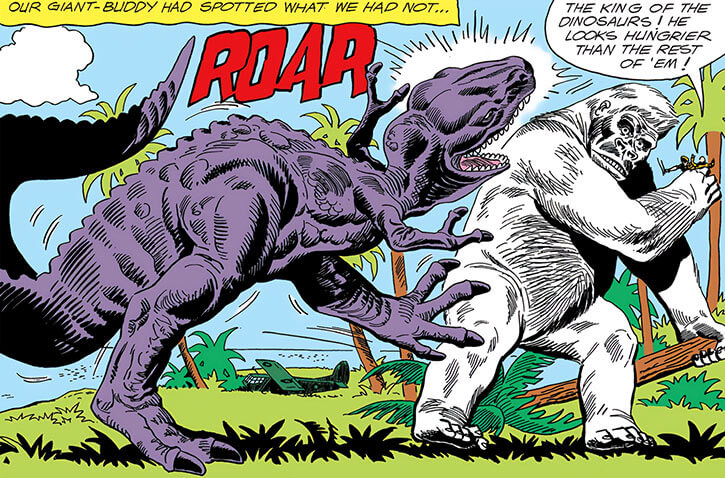 Vicious mega-fauna attempted to sink the boat. When the immense silverback came to help, Flag assumed that it too was hostile.

However his passenger, a US Army Ranger called Jesse the Professor, had studied the cave paintings. He thus thought that the ape was benevolent. Jesse was right – the ape fought the mega-dinosaurs. He was critical in allowing the crew to leave the Island alive.

However, it was felled by a pack of frenzied mega-dinosaurs as it covered the retreat of Flag’s PT boat.

For weeks, Flag felt guilty about the ape’s self-sacrifice. He irrationally wanted to return to Dinosaur Island to ascertain whether the silverback was indeed dead.

He had an occasion when he and Jesse the Professor had to crash their glider here after another mission.

The two men established, to their dismay, that the colossal primate had indeed died.

Shortly after their macabre investigation ended, they were beset by yet more giant carnosaurs. But an identical white mega-gorilla came to help. Jesse theorised that it may have been the son of the dead ape.

Beating back attacking mega-carnosaurs, the second Great White Ape returned the two Americans to their gliders. It cleared the sky of attacking mega-pterosaurs, and hurled the glider into the sky like a paper plane.

As they flew to a safer area and radioed for pickup, Flag and the Professor feared that this gorilla, too, had sacrificed his own life. It was now beset by a flock of mega-pterosaurs.

Two Suicide Squad troopers later crashed on Dinosaur Island with their Helldiver . They stumbled across a gorilla exactly like the ones encountered by Flag and the Professor. It likely was the younger specimen, who had survived.

Smitty, the plane’s gunner, knew that the ape was benevolent. Thus, the two men helped it fight off a mega-carnosaur. The gorilla returned the favour and helped the two soldiers to safety.

Whether the Helldiver’s crew made it back to base is unrevealed. But they chronicled the encounter in a message in a bottle.

In the last story the gorilla was mistakenly coloured like a normal ape. But the dialogue refers to it as white.

The Ape really likes Humans. He will unhesitatingly fight against very poor odds to defend them.

Bonuses and Limitations:
Density Increase and Growth both are Always On and Already Factored In.

The stats were spliced with the stock stats for an ape in the book, for a bit more coherence. The Impervious level was picked so bazooka fire wouldn’t hurt him.

The PL is deceptively low, in good part because of the Impervious ranks.

Source of Character: DC Universe… in a very loose sense. 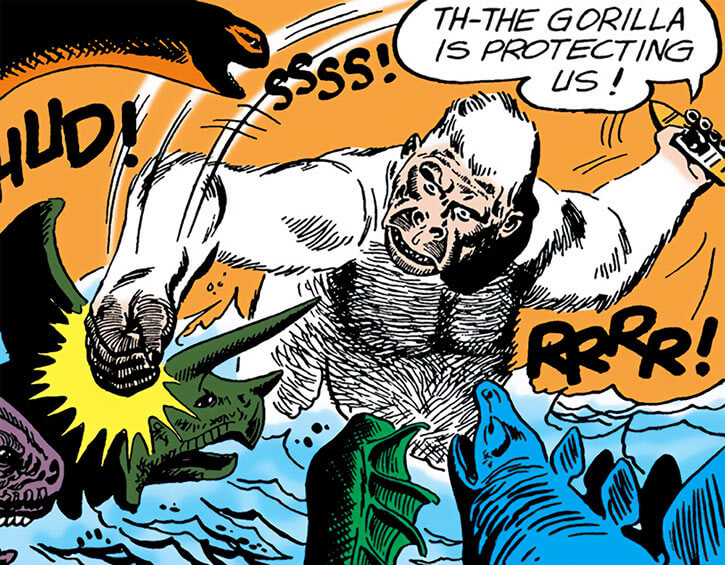 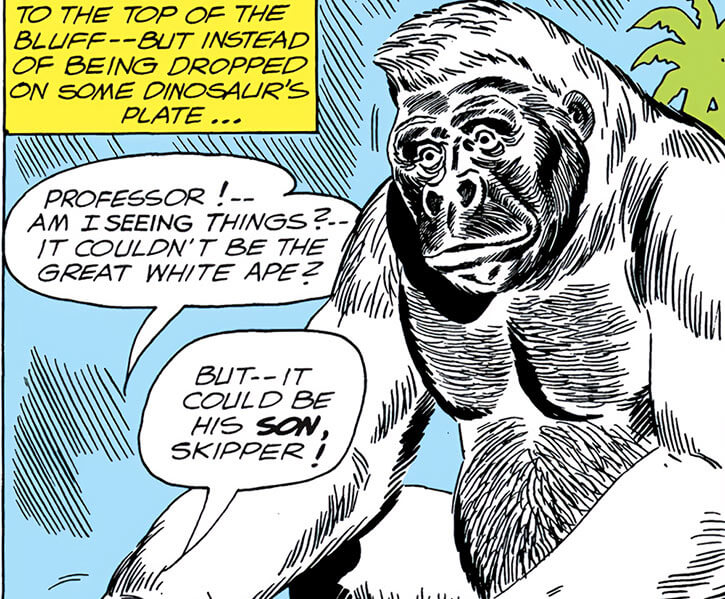