Green Dragon has amazing quickness and physical strength for a man his size. His training has emphasized various Kung Fu substyles that utilise this fact.

However, he’s spent little time on “mystic foolery” such as chi  abilities. As such his admittedly impressive power and skill are essentially stagnating. He has gone as far as he can without studying the more esoteric aspects of the martial arts, which he has neither the patience nor discipline to do.

He tends attack quickly and hard, hoping to take his opponent down easily. Only if this proves unworkable does he resort to more advanced tactics such as acrobatic manoeuvring and specific styles. Due to his relatively low defenses, he has a tendency to use the dodge maneuverto avoid foes with powerful attacks.

His tactics are also determined by his “honor” as explained below.

Chow Deng was born to a poor peasant family in central China. As soon as he could walk, he went to work in the fields assigned to the family. One day, when Deng was only eight years old and his sister Lin only five, his parents were both killed in a tractor accident… The cause was never precisely determined.

Over a year went by with the siblings barely able to eke out an existence. But a group of monks then arrived with an offer. They would teach him the ancient fighting arts so that he could enter something called “the Tournament of the Dragon” and triumph. In return, they would support him and his sister.

Deng accepted without hesitation. After many long years of training, his many natural gifts were brought forth. He grew into a strong, proud, young man, far more skilled at combat than anyone he had ever faced. He thought himself ready for the tournament. But the monks dashed his hopes, telling him that he had many more years to go.

Deng would not accept that. It, and the whole tournament thing, sounded ridiculous. He learned all that he felt he needed. With that, he took his sister, and fled. Deng felt that he had the skills necessary to make good money in America.

Land of the free

Deng quickly became disgusted with America and its people. His masters has always told him that Americans were undisciplined & foolish, and Deng now thought that they were right. His sister, on the other hand, was enchanted. She embraced America and all of its unique qualities, eventually becoming an actress.

Meanwhile her brother began testing his skills by picking fights, which brought him into conflict with the police. But it wasn’t until he faced a superhero that he ever had any sort of challenge. In fact, he lost that initial challenge, beaten by a Westerner. This left him disgusted, infuriated, and above all, humiliated.

Shortly thereafter, he fell in with Chinese-American mobs, who were impressed with the fight that he brought to the superhero. He began doing jobs that not only earned him fat paychecks, but gave him the chance to practice his skills and vent his rage. With his fighting prowess and hatred of the West, he crippled or maimed many of his opponents.

Home of the brave

His new masters nicknamed him “Green Dragon”. They even gave him a costume akin other martial artist “supervillains”. Deng took the name and costume as a badge of honor.

He later decided to hire himself out to others as a mercenary villain, working for whoever could pay him top dollar and give him the opportunity for a good fight.

Some martial artists acquire their skills due to their strength of character and willingness to sacrifice a part of their lives for the sake of overall personal growth. But Green Dragon is not one of them.

Deng is headstrong, stubborn, proud, and angry. He is a bully stubborn enough to learn martial arts. Deng got through it all via innate talent and sheer bullheaded resolve.

He uses his abilities to make himself feel big, pushing people around to get what he wants. He does not tread the path of self restraint & inner peace that many other martial artists do. He often announces his presence & makes a brief, haughty speech before he attacks someone.

On top of this, Deng is a vicious anti-Western bigot (despite the fact that insults to HIS ethnicity often send him into a rage). He considers Westerners, particularly Americans, lazy, undisciplined, and stupid. As far as he’s concerned, beating them up and taking their money is just cultural evolution in action.

He is not, however, wholly without good qualities. He is in fact an honorable person and warrior, refusing to attack opponents from ambush, fight dirty, fight women (unless they attack him first), use weapons (again, unless they are used against him first), or dishonor himself through sinful or licentious conduct.

The only thing in the world that means more to Green Dragon than fighting is his younger sister, Lin. Unfortunately, he expresses his love as a stifling overprotectiveness. This is extremely annoying to her now that she has grown into an independent young woman.

Her chosen career as an actress is scandalous and repugnant to him. Therefore, Deng is doing everything he can to make Lin live a more “womanly” life. His attitudes about women are just one of Deng’s many reactionary opinions. As Lin has observed, his views are often “12,000 miles and 2,000 years away”.

(Translated from Mandarin Chinese) “American dog ! Now I will show you what TRUE Kung Fu is !”

Green Dragon is of small to average height with a slim build of well toned, rock-solid muscle. His costume is made of a scale-patterned material (like snakeskin). The mask is dark green, with two flares projecting outward across either side of his face. These are embroidered with gold & orange threads.

The eyepieces are lined with a sort of transparent gauze which makes his eyes look solid white, like Spider-Man’. The chest, arms, and legs of the costume are dark green, with the gloves, boots, and trunks being lighter green.

Green Dragon would work great as an enemy of Green Arrow (Connor Hawke).

Equipment:
Generally fights unarmed, but occasionally will use various martial arts weaponry if his opponent does so. 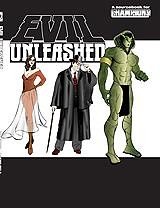 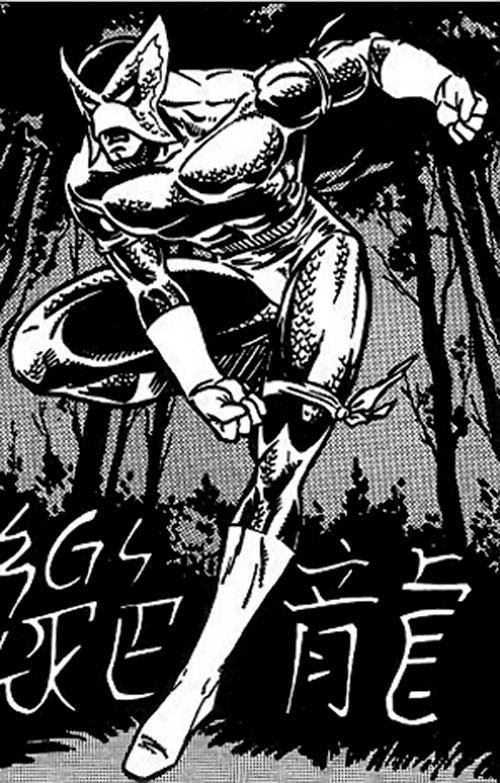