Norman possesses super-human strength, thanks to his Goblin Formula. The Goblin’s strength is marginally less than that of Spider-Man, and he’s capable of lifting an estimated 9 tons. His durability, however, is greater, and he is reported to possess bullet-proof skin.

In addition to enhanced strength, the Goblin Formula has also granted Norman increased speed, reflexes and endurance. He’s a near-equal to Spider-Man in these areas as well.

Norman also possesses a regenerative ability. While not as instant as for example that of Wolverine and Sabretooth, it nonetheless allowed him to survive and eventually fully recover from a horrific chest wound inflicted by his own glider.

The chemical concoction that gave Norman his enhanced physical abilities was also responsible for lifting his intelligence to very high levels. However, that came at the price of much of his sanity. His original talent for ground-breaking electronics and weapon-related chemistry was enhanced by the formula he imbibed, pushing his abilities in this area to exceptional levels.

This allowed him to create the extraordinary arsenal of weaponry which has become his trademark.

Norman is also a cunning businessman, and a masterful strategist. 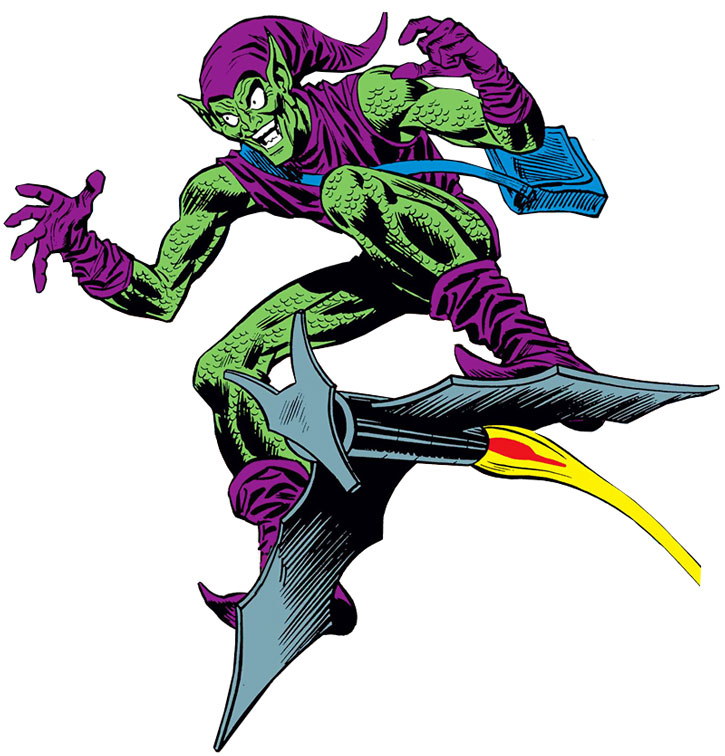 Also, the Green Goblin has developed a gas that can neutralize Spider-Man’s early warning danger sense for a limited period of time, as well as other unusual chemical weapons and explosives.

The Green Goblin has one of the most memorable supervillain costumes ever. His whole slim and defined body is covered by a skintight, scaled, bright green suit made of bullet-proof steel-mesh. On top of this, he wears purple boots, purple gloves, a purple jester’s hat, a pair of purple shorts and a purple sleeveless shirt.

The Goblin also carries his purple Goblin trick bag around his chest. Ordinarily, the Goblin flies around standing on his Goblin Glider, which looks like a large, metallic bat. The Goblin is always seen laughing insanely, moving around slenderly around on his glider, while he picks up a weapon from his bag. 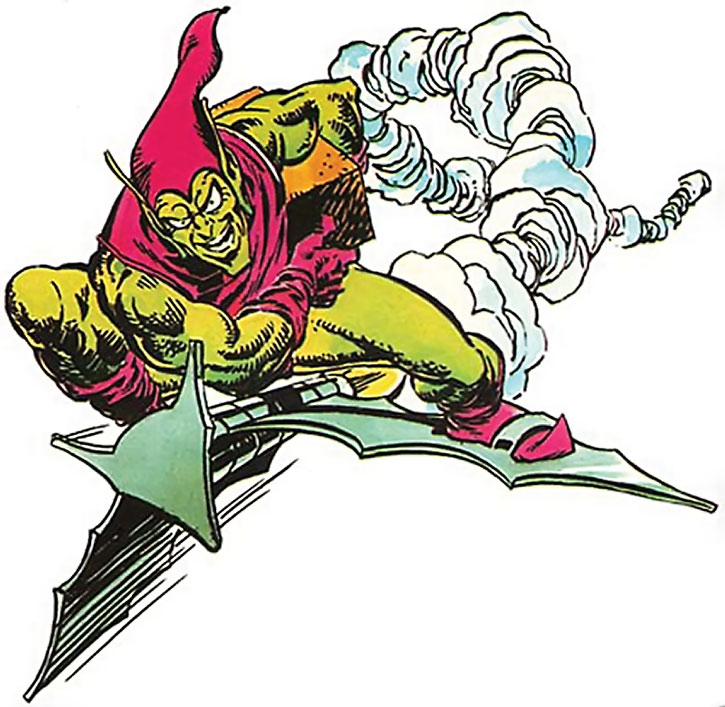 Norman Osborn, on the other hand, is by contrast depicted as a rather largely built man with focused eyes, rather aggressive, but controlled, body language. He sports the red-brown Osborn hair, which is almost a trademark within his family as it displays unusual properties.

Osborn is a dangerously twisted and psychotic villain. At first, he was just a ruthless businessman, but became truly insane and power-hungry after his accident. His madness started the whole Goblin legacy, a legacy inspired by hallucinations seen in Osborn Manor, where he was locked into by his father, while a child, in order to learn to embrace the darkness and grow into a powerful man.

His whole upbringing suggests that mental illness is commonplace in the Osborn family line. This is evidenced in his father, his poor son Harry and perhaps even his grandson (who grew up to become another Goblin in the Spider-Girl series). The Goblin legacy is responsible for the creation of the second and third Green Goblins, the different Hobgoblins and even the Demogoblin (plus others later, such as Menace – ed.).

The only good thing to come out of it is the fourth, heroic Green Goblin. Clearly, from his actions and his costume, Osborn wants to attract attention and instill fear. 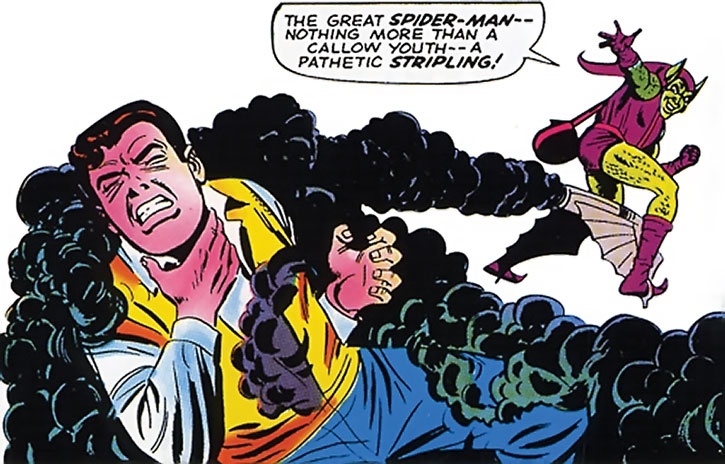 Osborn believes that he gave Harry the greatest of childhoods. But in actuality, he switched between giving him gifts and appreciations to total apathy and hatred. This made Harry, who worshipped his father, into a weak and insecure individual, the opposite of what Osborn had wanted.

The Goblin is one of the Spider-Man’s greatest enemies. He not only matches him physically and mentally, but also knows his secret identity. He often strikes at Peter through his friends, and even killed his beloved Gwen Stacy to get at him.

Osborn’s main goal has always been the acquisition of power and wealth, but he has been sidetracked by his great enmity and hatred to Spider-Man for years.

After apparently having died by being impaled by his Goblin Glider, Osborn chose to leave for Europe to recuperate and secretly build up his power base. From there he contracted and financed several supervillains to combat the Spider-Man.

His old hatred for Spider-Man resurfaced anew with greater intensity when his son Harry died fighting him and he went back to controlling Osborn Industries himself in order to destroy Spider-Man.

Since Harry died, he has been looking for a heir to his corporation and the Osborn/Goblin legacy. In a sick respect-hate relationship to Spider-Man, he tried to mold Peter into the Goblin legacy in order to gain his desired heir.

Osborn has rather recently been engaged in occult studies as well, in order to increase his power, but it only made him more insane. His closest confidante, Donald Menken, secretly works to become the heir to Osborn’s empire. Osborn bears a weak spot for his grandson, but isn’t above using him, or his mother, in his plans. 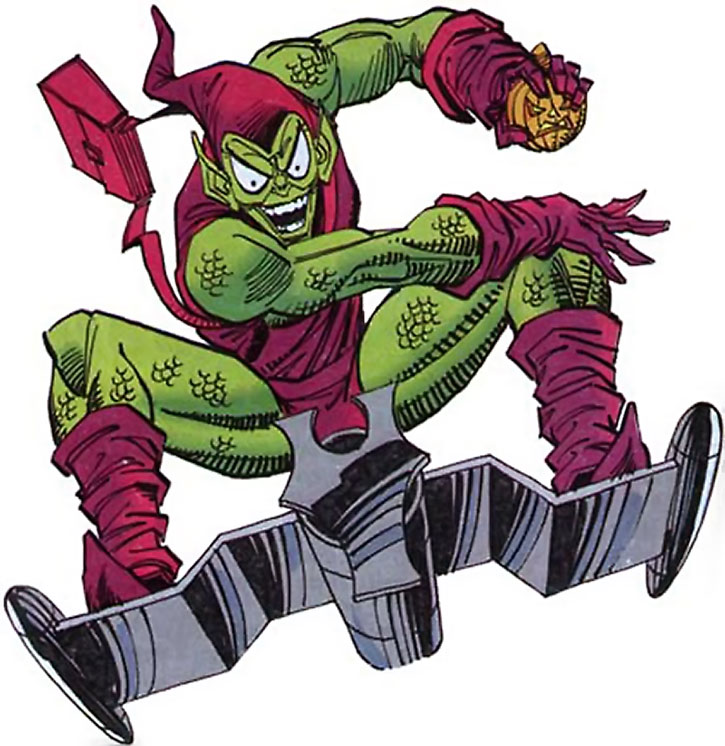 Power mad as he is, Osborn, of course, likes to gloat and belittle his enemies. This is also his greatest flaw; he could have finished Spider-Man off at several instances, but his gloating has allowed Spidey to recuperate and defeat him. Each time, Osborn believes that he cannot be defeated. Still, he remains a cunning, vile and resourceful villain.

“Think you’ll miss Mary Jane as much as you’ve missed Gwen, Spider-Man ? I picked a new bridge just for her, you know.”

“You shouldn’t have raised the stakes and had me captured after all these years. Anything that happens now is entirely self-inflicted.”

“You think you’re getting a happy ending here, Parker ? You think I haven’t got a million plans and counter-plans ?”

(To Spider-Man): “We are so alike, you and I. We’re cop and killer — the same psychological profile — one small step removed from being exactly the person we hate the most. Oh, you think you’re so high and mighty, but we’re both just a couple of borderline personalities dressed in ridiculous costumes, acting out our power fantasies. The difference between us is that I’ve always been willing to admit it.”

The Green Goblin would make a fine enemy to Spider-Man’s DC counterpart, the Blue Beetle. It would be interesting to see him matching wits with other lunatics, such as the Creeper or the Joker. The Goblin, given his image, might have a connection to the Harlequin, Punch and Jewelee or the like.

He’d also make an excellent foe of Superman. Clark has several loved ones that can be effectively threatened by Osborn knowing his secret ID and if he was as effective at neutralizing the man of steel’s powers as he is Spider-Man’s then the fights would be very interesting. 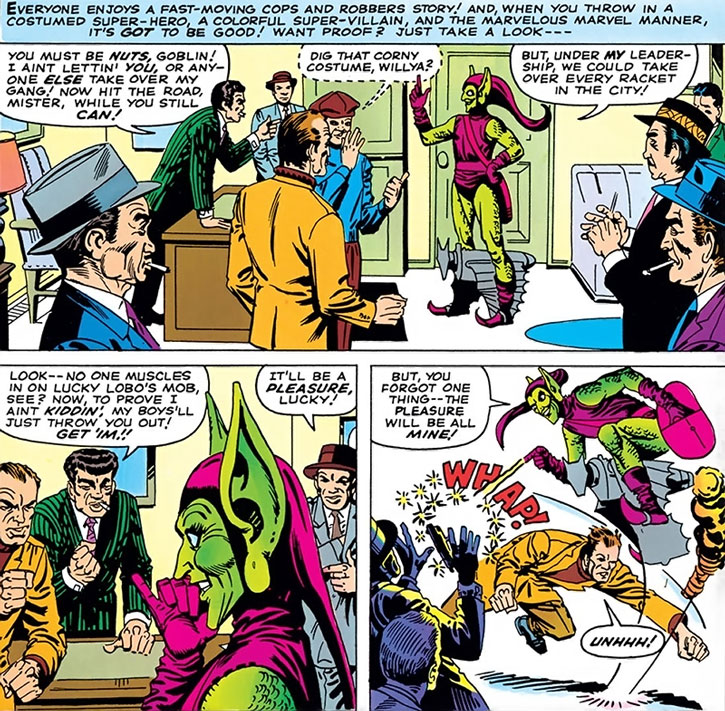 Another place for the Goblin would be within the “Flash’s Rogues Gallery” (Barry’s, obviously) or putting him up against the Atom. Either of them have powers that could be logically neutralized with chemicals of various sorts, they both have a few incidental targets, and Osborne rants like a good Silver Age Flash villain should.

Whenever Osborn’s Psychological Instability is activated in-game, it often has severe effects. He either falls unconscious from the stress, only to wake up with amnesia regarding all of his Green Goblin activities, including the knowledge of Spider-Man’s secret identity.

Or, then Osborn is instead cured of his amnesia returning to the insanity of the Green Goblin legacy. Osborn’s level of schizophrenia is cinematically incurable.

Also, during times of great stress, as directly after a ritual casting attempt went awry, his Psychological Instability has been temporarily boosted to Catastrophic levels. Osborn regularly uses medicines to dampen his insanity. Such cocktails of drugs are specially designed for Osborn’s physiology and will not work on others.

He usually keeps a storage of several dozens of patches. The game effects of a Dermal Patch (when attached to the arm) are as follows: 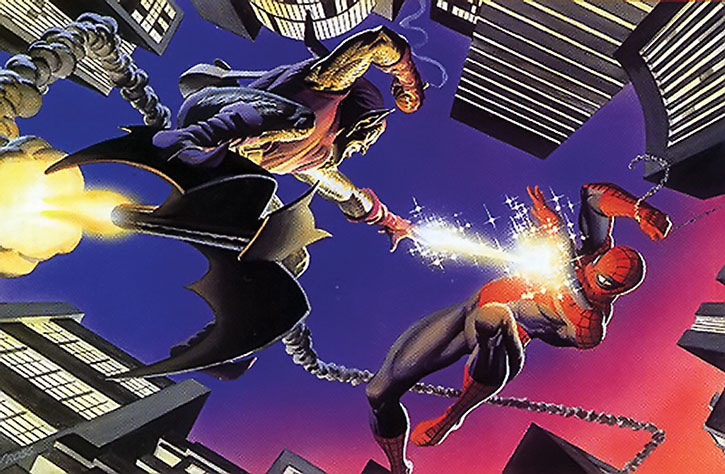 The Classic Green Goblin had a STR of 08 APs only, and a BODY of 06 APs. The Goblin Armor has a /BODY/ of 08 APs, All Mental and Mystical Attributes, as well as Skills were 1 AP lower than currently. The classic Goblin does not have any Occultist Skill at all.

Before the recent retcon that has enabled the return of the Green Goblin, he did not have the Invulnerability power either. The current Goblin increased this STR by using a new formula upon his return.

The Character uses grenades (or other thrown, exploding projectiles) that sometimes have fiercer effects than should be expected, hurting beings that are normally proof against such weaponry.

The Character can lend HPs to his grenades (this is a very specialized version of Leadership), which they presumably will use for their Bomb power or equivalent. The Character can still expend HPs on throwing the grenade, for instance on a difficult throw.

In realistic genres where the character cannot freely use HPs to increase the APs of his grenades effects, this Shtick allows the character to spend HPs on his grenade attacks, making him deadlier than most. Alternatively, the GM may opt to halve the rate of Bomb’s decreasing APs over a radius effect, thus making bombs even deadlier over distance.

In the case of the Green Goblin, this shtick is useful with his Pumpkin bombs, Anti-spidersense gas grenades, Wraith smoke grenades and Wraith KO gas grenades. 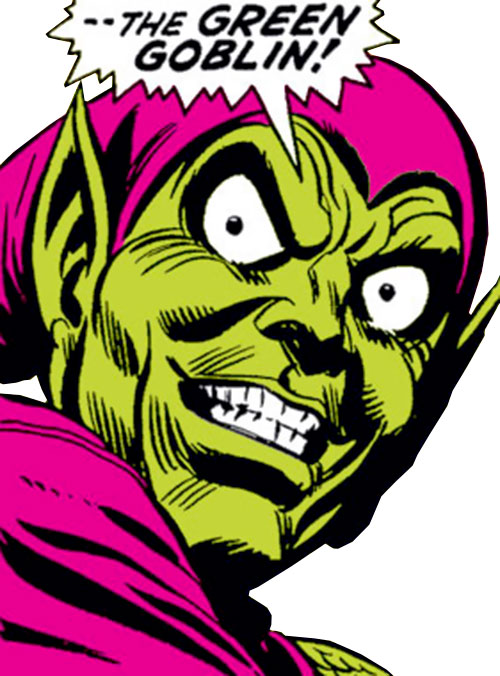 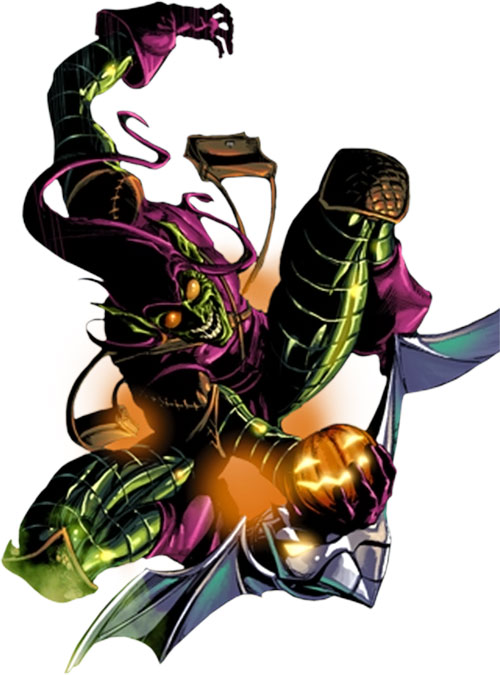 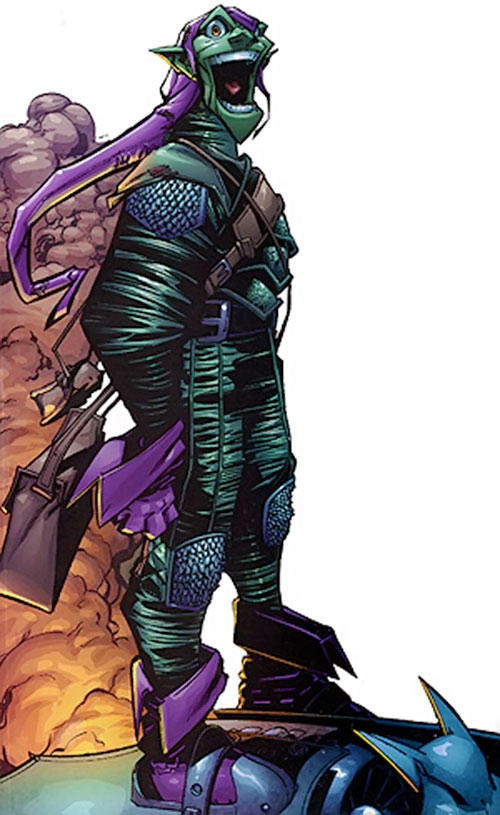 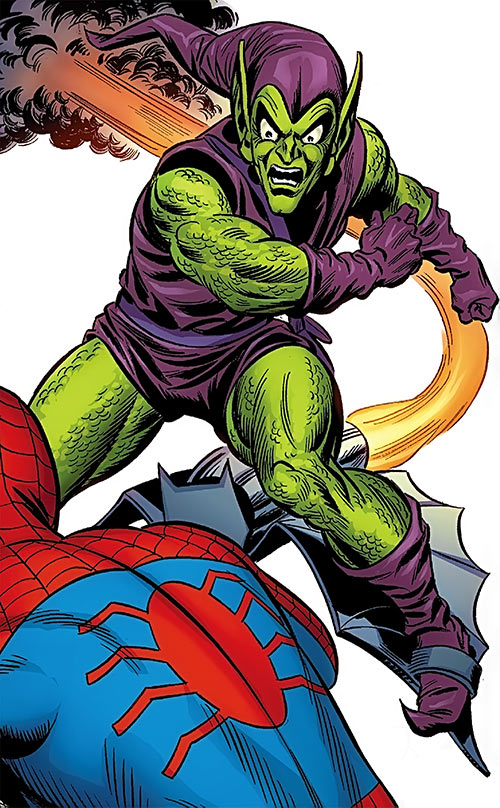 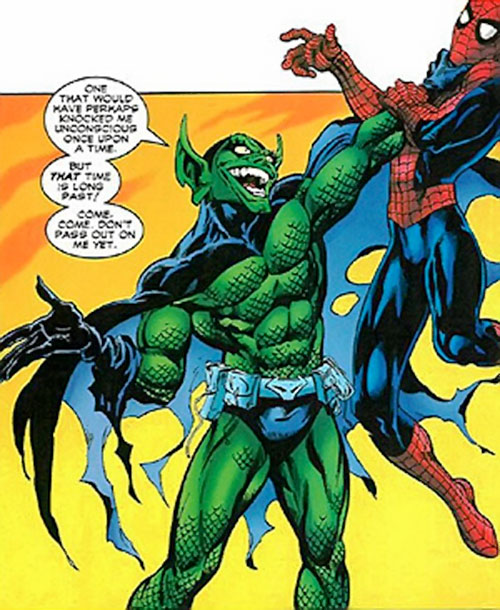 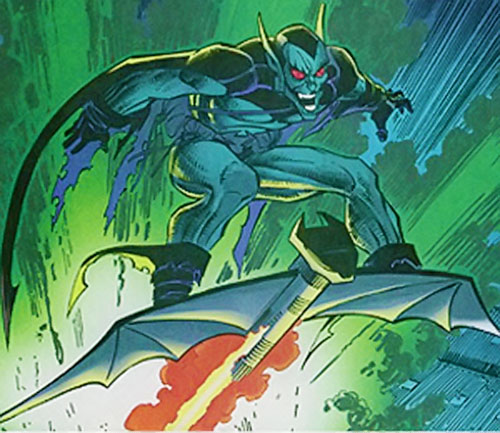 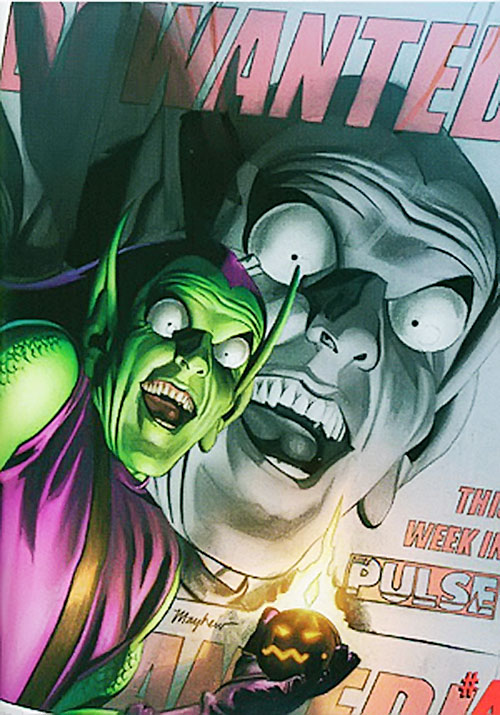 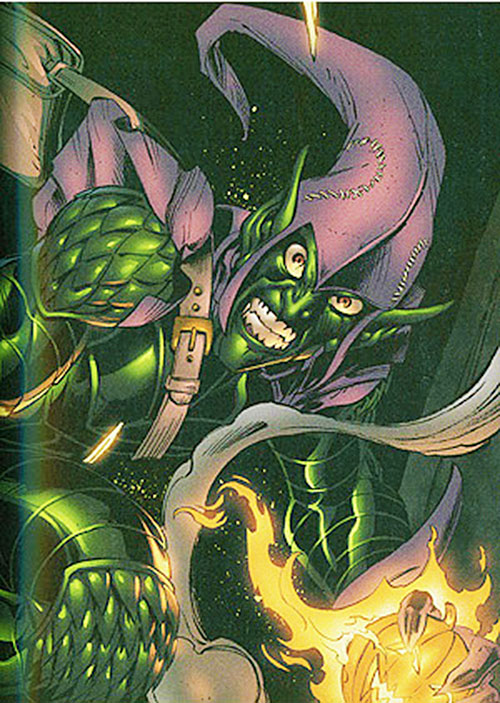 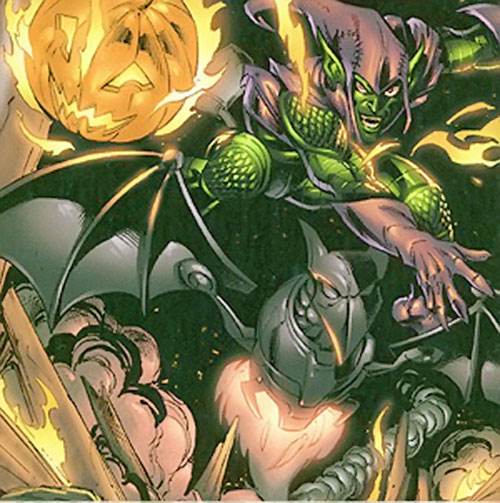 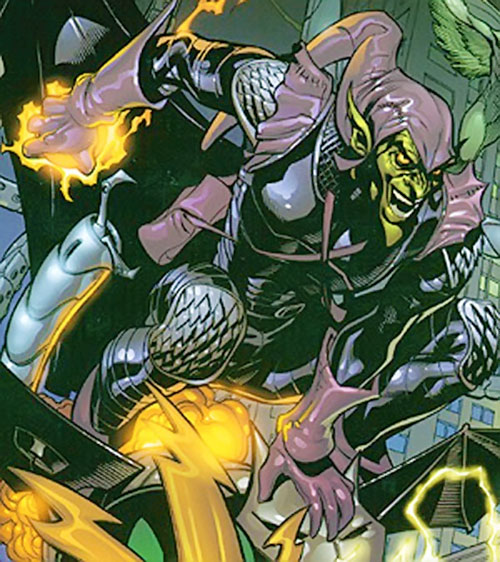 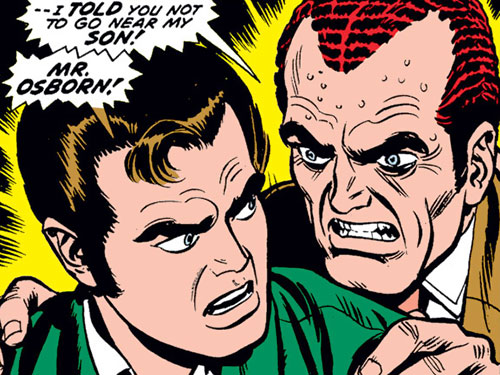 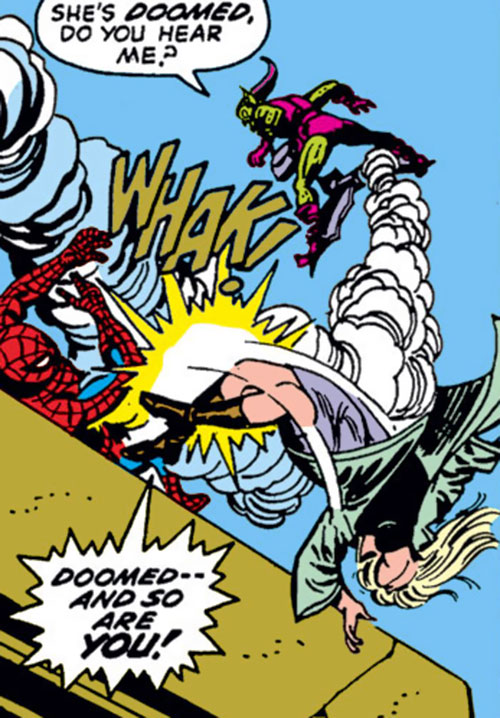 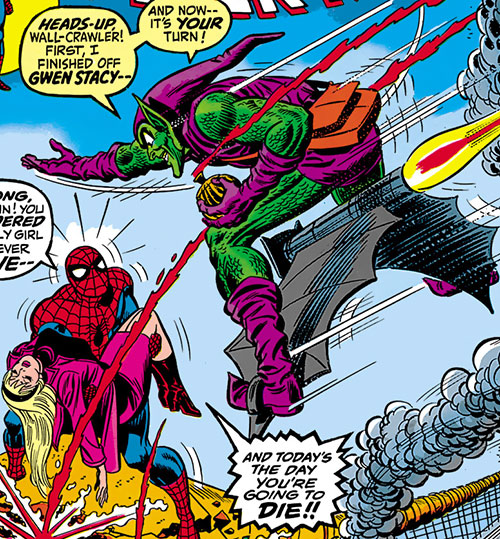 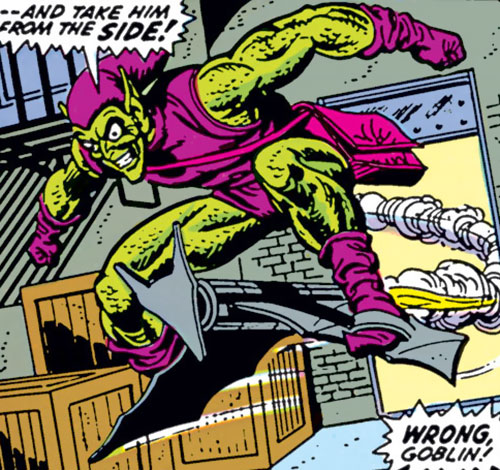 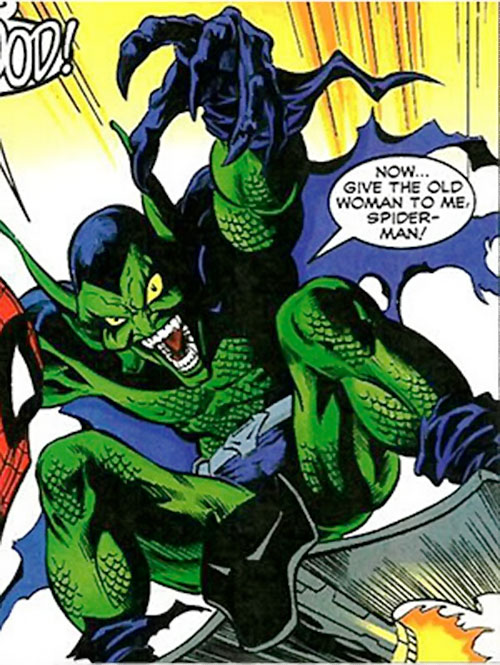 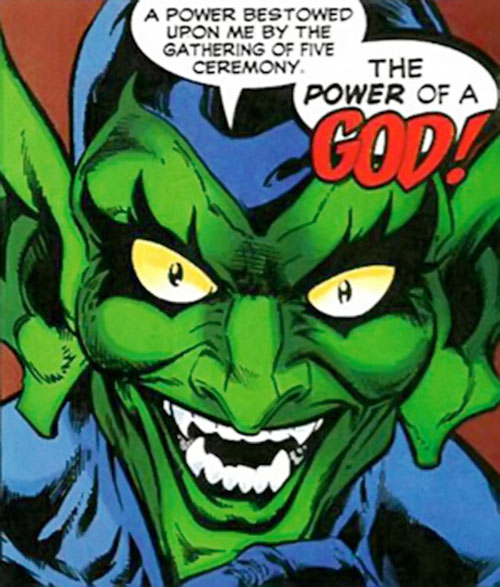 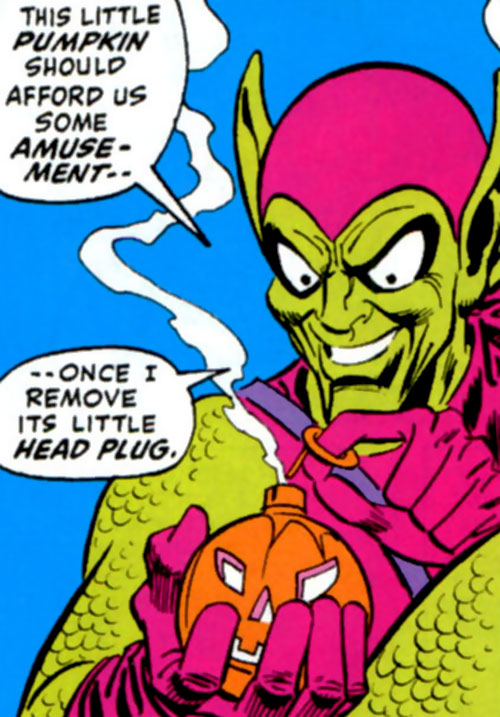 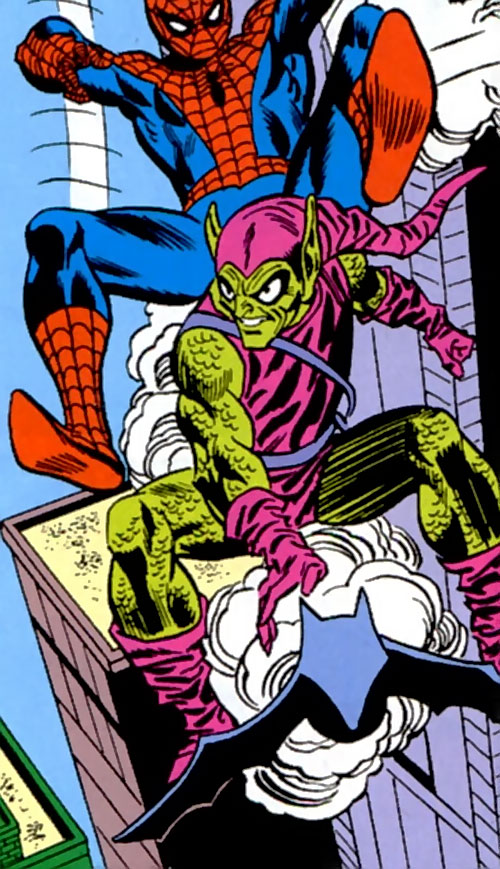