Britt Reid is a large and robust man, who has been trained in the Japanese martial arts by Kato. Though he’ll never be as proficient as his chauffeur, he’s able to take on most street toughs or even experienced boxers.

As a journalist, Reid likes words and enjoys talking. He’s the “face” of the pair, and will happily delivers the messages.

Reid has a certain talent for theatrics, and some scenes loosely imply that he has a powerful voice. The Hornet is fairly intimidating, though that will not work against truly determined individuals. And he has yet to build a genuinely scary reputation.

His journalistic talents extent to legworking, research and networking. Furthermore, his position as the head of the Daily Sentinel opens many doors in Chicago, and brings him considerable intelligence gathered by its reporters.

As a result Reid has a fine knowledge of the Chicago mobs and how the city works. He can also call various favours as a member of the city’s elite.

Another strength of the Green Hornet is his unique arsenal, giving him a considerable edge against his foes. Key pieces of kit include :

Britt Reid is the only child of crusading Chicago newspaper owner Daniel Reid. During the Roaring Twenties (and presumably before), Daniel Reid had his Daily Sentinel relentlessly expose the Chicago mob and corruption. To him, that was the mission of a journalist.

An amateur entomologist, Daniel Reid kept a number of pinned insects under glass. This collection included one scary (fictional) specimen of vespa viridis. These green hornets, found in Kenya, are exceptionally deadly. The specimen impressed Britt during his boyhood.

Daniel always assumed that Britt would succeed him. He did not quite see that Britt was more inclined toward athleticism and travel. Trying to please his father, Britt nevertheless became the editor-in-chief of his high school’s newspaper, the Westlake Herald.

However, in 1934 he rebelled. Britt packed his bag and decided that what he wanted to do was see the world rather than work at the Daily Sentinel right after graduating as his father intended.

His father was nevertheless supportive, seeing his mistake. He set up a trust fund to pay for his son’s travels, as rich people do.

The younger Reid spent 1935 and part of 1934 travelling in Europe. There, he witnessed with dismay the rise of Nazism and Fascism. In 1936 he was in Africa. In undocumented circumstances he tried to launch a newspaper in Magadi, Kenya (south of Nairobi).

Things went wrong. Reid’s employee, a man named Adisa, was killed as they fled from local paramilitaries. Reid only survived as he spotted a nest of green hornets, recognising them from his father’s study. He provoked them into killing his pursuers.

Reid fled Kenya in August, sailing to Japan then China.

In 1937, Reid was deep inside war-torn China. In Sichuan he received a telegram warning him that his father had become very sick. As a result, Britt made his way toward the coast to return to the US.

In early December he was stuck in Nanking, where the Chinese government had fled the Japanese. The Japanese then attacked.

Witnessing the horrors of the Rape of Nanking , Reid was looking for a way out. This is how he ran into a Japanese deserter who had been sabotaging the efforts of his countrymen. Though highly skilled, the renegade had just been caught. Thanks to a convenient power line, Reid saved the man from an ad hoc firing squad, and they fled Nanking together.

Hayashi Kato became a close friend and ally. Having lost his country to the early Shōwa Era , Kato accompanied Britt all the way back to the US. Reid passed himself for Hayashi’s manservant as they were on a Japanese merchant boat, then fed US customs a story about foreign students.

In San Francisco, the careless Reid was attacked by a street gang who had overheard about his trust fund. In the ensuing scuffle, he discovered Hayashi’s amazing martial skills.

Though Hayashi was somewhat ashamed of this display of violence, Reid asked if he could be taught to fight this way. He wouldn’t even wait to arrive to Chicago, and had Kato start teaching him whilst still on the train.

However, Britt arrived the day after his father died.

As he mourned, Britt learned that he had inherited the Daily Sentinel as his father had always intended. He resolved to continue his father’s fight against the mob and corruption. He would particularly target mob boss “Skid” Caruso, who had practically taken control of the town.

However, it was trivial for Caruso to threaten the families of the Daily Sentinel staff. After attempting to expose the mob Reid found himself with his hands tied.

(In the real world, Frank “the Enforcer” Nitti  was still the boss of the Chicago Outfit  during these years. In the Green Hornet’s world Nitti fell in unrevealed circumstances and was replaced by Caruso.)

Kato suggested covert action, striking from the shadows – and the use of masks to avoid reprisals. After Hayashi showed him what a ninja can do, Reid was convinced. Britt trained for seven more months with Kato in the basics of ninjutsu and the martial arts. He also continued to assemble assets for a shadow war against the Chicago mobs.

A key recruitment was mechanical engineer “Rusty” Schmidt. He was an older German-American who used to run the presses for Daniel Reid. Rusty’s daughter had been killed by a mob gunman, and his very affected wife died soon after. Rusty himself was sinking into alcoholism when Reid recruited him for his shadow war against the mob.

A capable inventor with superior practical sense, Schmidt designed the likes of the Green Hornet’s “stinger” gun and the Black Beauty supercar. He also provided excellent advice about logistical matters.

Following his advice Reid sold his father’s house, where he had grown up, to buy an apartment building facing a warehouse. The warehouse had been used by the Underground Railroad , and was thus ideal for conversion into a secret base.

A secret elevator was installed in Reid’s new apartments. It allowed him and Hayashi to quickly reach a tunnel leading to the warehouse. Once there they could switch to costumes and exit discreetly in their car via hidden doors and a blind alley.

Schmidt eventually ran into technical difficulties to build some gadgets – being primarily a mechanical engineering man. But Kato teamed up with him and brought his more recent and general scientific knowledge to the table.

Soon, the Green Hornet and his chauffeur were ready for action !

Reid is primarily a crusading journalist fighting against crime and corruption to defend the honest everyman. His activities as the Green Hornet are but a continuation of this. They are made necessary to protect the staff of the Daily Sentinel from payback by the mob.

Lesser contributing factors are his taste for physical action, and for adventure. Reid is passionate about his role as a publisher, which is his reason for living and his mean to honour his father.

Britt and his father seem to be men ahead of their time. They share an interest in foreign cultures, and progressive social views. Unlike most people around him Britt seems free of racism, xenophobia and misogyny, and strongly disliked what he saw of Fascism.

Reid doesn’t seem to get racism. He hadn’t realised that most 1930s Americans couldn’t tell that Kato wasn’t Chinese until Mr. Hayashi pointed it out to him.

Reid likes words, being a 1930s journalist. But rather than writing he prefers delivering lines as the Hornet, which one suspects he has rehearsed beforehand given their theatrical and dramatic quality.

Being a man with a cause, he’s always happy to make thunderous proclamations about the evils of crime and corruption, the “awful sting of the Green Hornet” and how mobsters are a cowardly, superstitious lot.

The Hornet never intended to be mistaken for a criminal. Yet, he plays the role of the pulpish masked two-fisted mob boss with gusto. This is another layer of deception protecting those who would otherwise be exposed to retaliation. Furthermore Britt likes sounding tough, and it gives another excuse to chew the scenery.

Britt Reid can occasionally come across as an eager and spoiled youth, and is not as redoubtable as he likes to think he is. But he is competent and a good man with his heart in the right place, and possesses genuine courage.

“How do truth and justice stand a chance against such brutality and vice ?! Laws are subverted ! Influence is bought ! Even the press is subject to intimidation ! There’s just got to be another way to fight these bastards—!”

“I can’t just run around, masked and committing homicide – otherwise, I’m not better than the thugs I’m up against.”

“I’ve always heard that ‘Skids’ Caruso’s men were yellow… and now I see why. Six armed gorillas against two common yardmen — the sort of odds that only a gutless coward could love !”

“Skid Caruso had an easy ride for far too long. He’s about to learn that there’s a new game in town ! Here, give him my calling card. And tell him to stay out of my way… Otherwise he’ll soon feel the awful sting… of the Green Hornet !”

The Hornet is a signature pulp character – though various versions set in later time periods have existed. He existed in a relatively mundane and low-powered reality, though, and crossing over with super-hero universes would be difficult on a sustained basis.

Being widely thought of as a mob boss shields him from many such interactions. For instance in the DCU he’d never have been asked to join the All-Star Squadron. But he’s best kept separated from the others.

This version of the Green Hornet tales is low cinematic. Most people have modest Attributes and Skills, the Genre is about Real, and Killing Combat attacks cause bleeding.

A recurrent element is that being hit hurts. BODY scores and HPs are generally low, and any attack using a weapon has its EV increased by one as a Genre rule (so a mediocre pistol with Projectile Weapons: 03 would have an EV of 04, an EV 03 knife would be EV 04 (possibly more with STR and/or Martial Artist), etc.).

Since this is a Genre rule, the EVs of the weapons in this entry are given *without* the +1 Bonus.

By Mike Winkler and Sébastien Andrivet.

Source of Character: This entry is specifically based on Matt Wagner’s 2010 Green Hornet – Year One for Dynamite Comics. It is a good modernised retelling of the character. 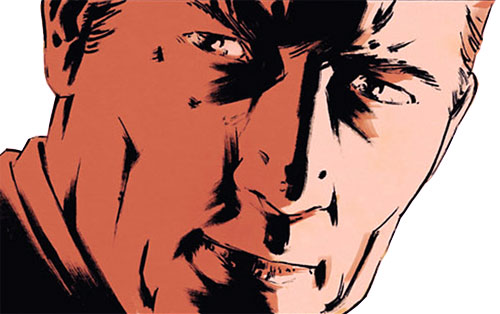 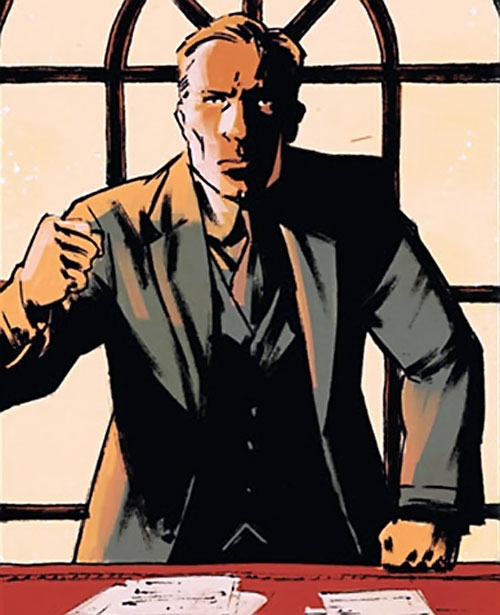 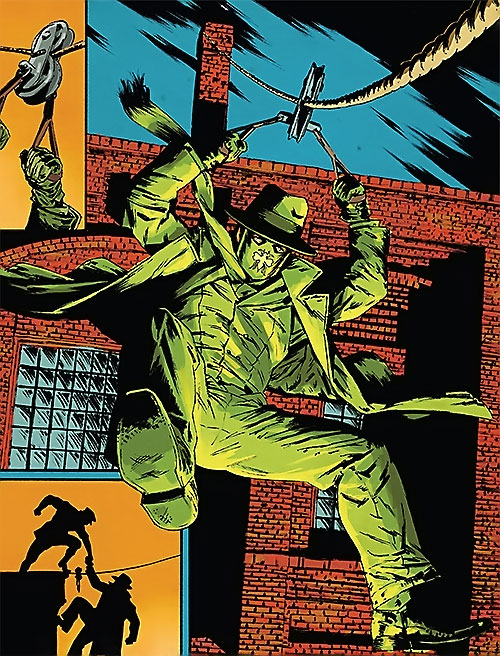 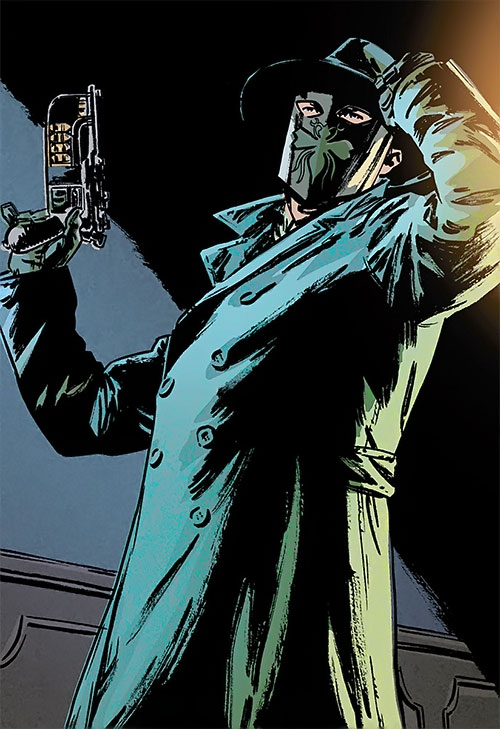 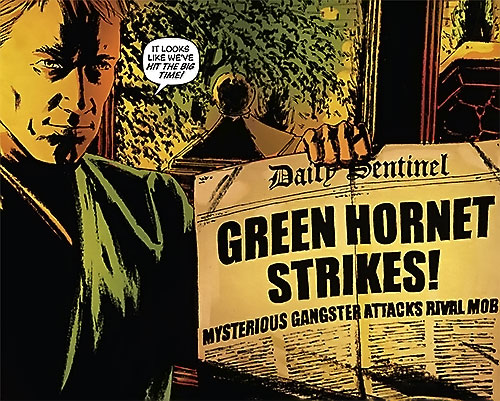 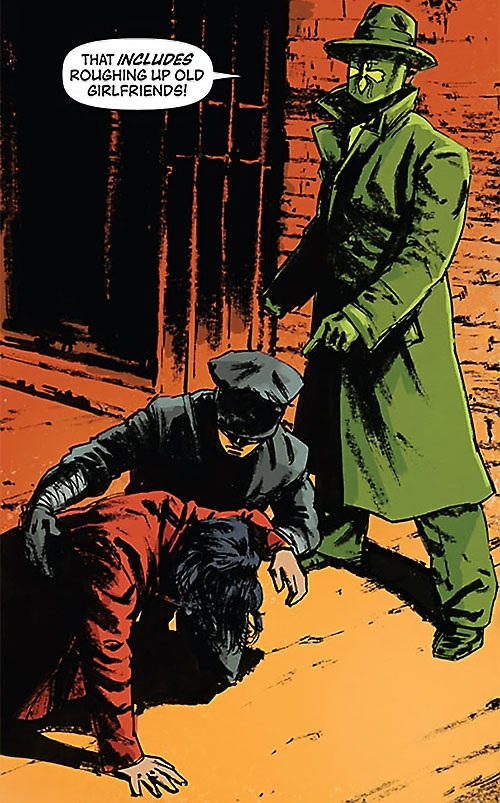