Kho is a teenage Khund warrior.

As such she is a mountain of hardened muscle who can lift hundreds of kilos above her head, and has lifelong training and experience with all sorts of violence. Khunds really, really like violence.

As a corporal, Kho sported the typical body armour and blaster rifle of her kind. As a Green Lantern, she wields one of the most powerful weapons in the universe. She seems fairly talented with it, and to have a good green-compatible willpower.

Khunds do not, as a general rule, have a flowery imagination full of metaphors and creative visuals. Thus, most of Kho’s force constructs are a giant version of herself performing simple physical actions. It is likely that she sometimes uses Wonder Woman imagery, such as bracers or a lasso.

Kho is either fluent in 1990s MTV American English, or used some sort of translator (perhaps a cybernetic implant).

Kho is the daughter of Kharhi, and advisor to the Khund Emperor. Perhaps because of her father’s position, she was exposed to alien cultures since childhood. This is vanishingly rare in her culture.

She grew fond of American mainstream youth culture, and also became a huge fan of Wonder Woman (Diana of Themyscira). In her teens she came to serve with the platoon under her father’s orders, and eventually made corporal.

In 2008, the Ichor invaded the Khund Empire. It destroyed multiple planets before the Khunds admitted that they were powerless against it. It was presumably at Kharhi’s initiative that the Khunds decided to contact one of their most respected enemies for help – Wonder Woman, whom they called the Destroyer.

Kharhi and his unit rushed to Earth. There, they attacked Wonder Woman as a sign of respect for her strength. They were swiftly defeated.

Diana immediately agreed to help the Khunds. However it was a trap. Kharhi just wanted Wonder Woman to distract the Ichor long enough for him to fly a planetbuster bomb into the thick of it. Though that would destroy their homeworld (but not necessarily the Ichor), the Khunds preferred death to being saved by an alien.

However, Kho discovered the plot and rushed in to warn her idol, not wanting Wonder Woman to die without any chance to fight. While Lt.-Col. Etta Candy-Trevor convinced the Ichor to renounce its attack, Wonder Woman and Green Lantern Procanon Kaa stopped Kharhi’s suicide run and contained the explosion.

However, having saved Khundia meant that the Khunds would resume their horrible conquests and massacres as soon as feasible. Procanon Kaa, whose daughter had been recently killed in a Khund raid, was accusatory about this. He had even considered letting the Ichor destroy the Khunds.

As his her wont, Wonder Woman found a solution. Procanon Kaa had just lost his daughter and Kho her father, and she encouraged the Green Lantern to adopt the Khund as his apprentice. This was quite clever. A Khund Green Lantern meant that the Green Lantern Corps was now kin and clan to the Khund, putting them in a delicate position when it came to conflict between the two.

It also meant that Kho could rein in any Khund leader. As a Khund she was allowed to challenge them to a duel if she opposed their policies, and she now wielded one of the most powerful weapons in the universe.

The wise Procanon found in himself the strength to accept the young alien as his apprentice. As to Kho, she was apparently happy for the opportunity to venture among the stars. She also appreciated wielding a seriously kick-arse weapon and becoming part of the Wonder Woman legend. Lastly, she welcomed becoming a soldier for an army far more powerful than even the Khunds.

Kho was trained by Kilowog, then handed back to Procanon Kaa for apprenticeship. Another newbie, Green Lantern Thulka Re, joined the duo as an apprentice. Over time, Procanon Kaa and Kho Kharhi did come to consider each other father and daughter.

Months later, Procanon Kaa and his rookies found a planet that had just been ravaged by the Silver Serpent space marauders. They could find but a single sapient  survivor before Silver Serpent forces attacked them.

Thulka Re died opening a breach among enemy forces. Kaa was seriously wounded as he covered Kho so she could fly away with the survivor. Kho grabbed Procanon Kaa, and saved both her charges. The seemingly unstoppable Silver Serpent forces were later defeated by Wonder Woman on Earth, presumably to Kho’s pride.

In 2011, almost every single Green Lantern, including Kho Kharhi, was mind-controlled through their ring by the rogue Guardian, Krona. She survived this crisis, but was angered by the sight of John Stewart destroying the mind-controlled Mogo to save the day.

When not in uniform, Kho likes wearing her Earth clothing. It includes sweatpants and an improbable plain grey T-shirt with the slogan “SWAMP THING SAYS RELAX” — presumably a parody of the old Frankie Goes To Hollywood T-shirt .

The sexual dimorphism among Khunds is slight. While Khund women have breasts and their face looks roughly like those of human women, the rest of their body is a broad-shouldered wall of muscle just like male Khunds’s bodies. With the standard Khund body armour and helmet on, it’s hard to tell the gender of a Khund despite the exposed arms and legs.

Kho was apparently quite young when first encountered, though with Khunds it’s hard to tell. Perhaps she was the equivalent of a 15-year-old.

Many of Kho’s preferences are Khundish. And Khunds are an advanced civilisation of vicious, brutal Neanderthals who revere brute strength, glorious victory through any mean, viciousness, constant combat, fighting to the last and strict tribal honour. This is much of her background and a large part of how she thinks. Her Green Lantern oath reflects this culture.

However, Kho has been exposed to alien values since childhood. Unlike most Khunds, she is not xenophobic. She even evidences a sense of fairness and compassion, which are considered rare mental illnesses on Khundia.

For instance, when faced with peaceful Gelfling -like creatures, she treated them with generic politeness – rather than as complete losers who couldn’t even kill a dog with their bare teeth like a real Khund can.

Her first reflex when finding a traumatised girl of that race was to touch her face to soothe her. She then used her ring to create a cast for a broken arm and asked Kaa how to use the ring as a mild sedative. All of this is particularly un-Khund-like and much closer to how an Amazon of Themyscira would behave.

Kho Kharhi approaches being a Green Lantern like being a warrior monk learning a complex martial art. She says “yes teacher” to *everything* her mentor says, bows to other Lanterns, seriously studies and applies the GL ethics as if they were some exotic kung-fu philosophy, etc.

(Squeeing at Wonder Woman) “You nearly killed me ! You almost popped my head off ! And when you used our weapons against us, that was so rad ! That was fantastic !”

Wonder Woman: “I could not save your father, Kho. I’m sorry.”
Kho (flatly): “He died trying to save our people’s honour, Princess. No regret is needed.”

(Reading the standard Green Lantern oath) “You don’t understand. I don’t know what some of these words mean. What is ‘evil’ ? Why is the darkness to be feared ?”

Drawbacks:
Exile (Voluntary), Misc.: Kho has just left Khundia and knows very little about the rest of the universe.

Here are the adjusted stats for Kho’s power ring. See the main power rings article and the iconic Hal Jordan entry for much additional material, verily.

Advantages:
Area Knowledge (Universe ; Wormholes locations), Insta-Change (note that the glowing force field around the wearer obscures features – though the ring prefers to also create a mask just in case), Misc.: part of the Data Storage power is used to store the Green Lantern database in its mobile version.

The Ring can be Taken Away, but since the ten APs of Miniaturisation add to OV against those the Take-Aways usually occur when a Green Lantern is knocked unconscious, through subterfuge, or through will-against-will combat.

These stats use a heavily toned down version of the generic Khund stats in the Atlas of the DC Universe as a base. These Mayfair stats do seem… enthusiastic. 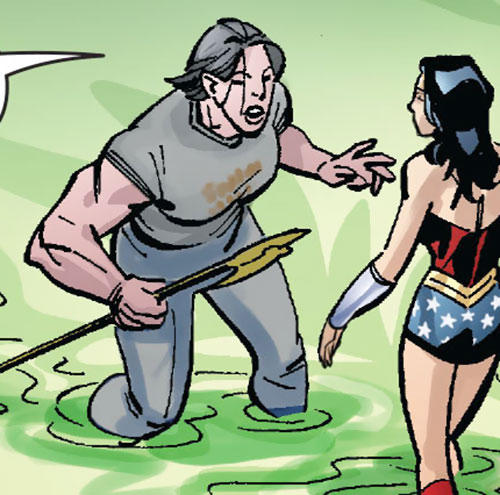 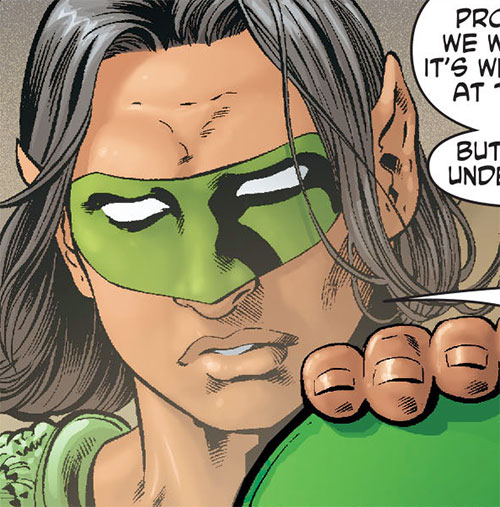