The Green Man’s stoic calm and experience with problem solving are major assets. His slow reflexes work against him in battle, though the highly poisonous blood of his species protects him from some direct physical attacks.

In addition, Psion surgery has given him new mental powers that are still developing. They include telepathy, and a form of mental gateway that can bring the Green Man instantly across great distances to the side of someone in need of help.

The Green Man was born on the planet Uxor, circling a star 52 light years from Earth in roughly the same direction as Vega. His race evolved on their water-soaked world from amphibious ancestors, and they still possess small gills beneath their lower jaw to allow breathing underwater.

The Green Man’s race has developed a communal society. There, group goals are stressed and individuality is scorned. The Uxorans take no personal possessions, not even a name. They are called by the life task to which they are assigned, and identify each other by their distinctive skin patterns.

The Green Man was a misfit who longed for personal identity, and when he was approached by the Guardians of the Universe he took the name of Green Lantern with pride.

This Green Lantern successfully patrolled his space sector for a number of years, learning much from his encounters with evil. But his sector was infiltrated by the notorious Spider Guild. Though he defeated individual attacks by them several times, they gained a foothold that even the help of other Corps members could not dislodge.

Seeing that the Spider Guild was continuing its incursions into the Vegan star system, the Green Man secretly traveled there to find allies. That meant breaking an ancient noninterference pact between the Guardians of the Universe and the Psions of that region.

Meeting Kalista and the other Omegans on the planet Rashashoon, the Green Man convinced them to return with him. Together they destroyed a Spider Guild nest that seemed to be directing the Vegan attack.

When the Guardians noted what they had done, they reprimanded the Green Man, ordering him not to reenter Vegan space. When the time came to part from his new allies, they were in such peril that he could not in good conscience leave them. He decided to stay with the Omegans and offered any help he could give without using his power ring.

Soon after, the group was captured by the Psions, and the Uxoran’s ring and power battery were confiscated. These changes caused the Green Lantern to give up that title, and he asked his new friends to call him Green Man instead. What his status would have been when next called to Oa is not known, but the Green Man was proud to be one of the Omega Men. He died during the Invasion.

This Drawback is the reverse of Lightning Reflexes, and subtracts 2 from the Initiative of the character. Since there are fewer collateral disadvantages than the Age (Old) drawback, it nets fewer points.

By Ray Winninger for Mayfair with adaptations by Sébastien Andrivet. 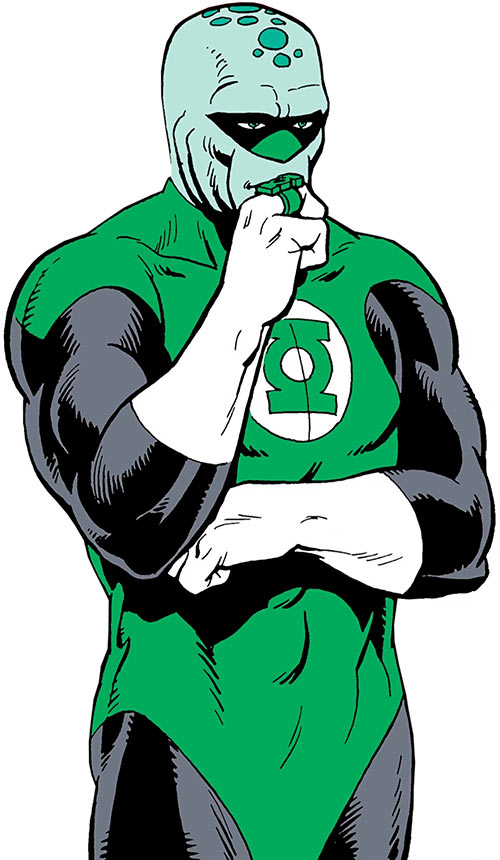