This profile covers Tommy’s career up until the point where he becomes the White Ranger.

When not clad in his strength-augmenting uniform, Tommy Oliver possessed the normal human strength one would expect to find in a youth of his age, height and build who engages in intense regular exercise.

With his strength augmented by his uniform, Tommy could lift (press) at least 800lbs directly over-head.

Tommy possessed a number of superhuman powers derived from his (presumably) mystically enhanced uniform. The uniform greatly augmented his strength and durability; effectively rendering him invulnerable to damage from firearms, large impacts, falls and even massive explosions.

It also enhanced his already impressive stamina, agility and reflexes to levels superior to those possessed by most Olympic athletes and gave him the ability to leap inhuman distances.

Tommy is a gifted hand to hand combatant and all around athlete. He has received rigorous training in swordsmanship, gymnastics, acrobatics and the martial arts.

In particular, he holds a 3rd degree black belt in Karate.

As the Green Ranger, Tommy’s principal weapon was the Dragon Dagger. Besides being a unusually sharp melee weapon, the Dagger had two specific features that augmented its utility. 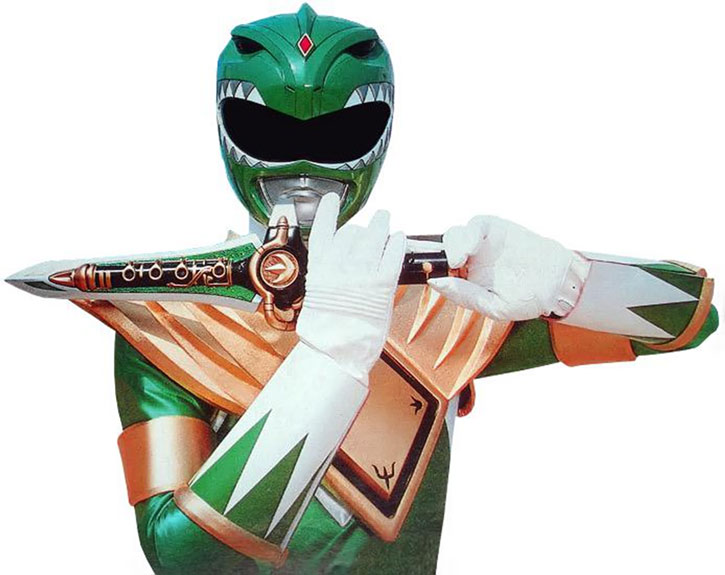 The first allowed Tommy to project intense beams of concussive energy from its blade at far off targets. The second allowed Tommy to activate and control the various functions of the Dragonzord and/or Dragon Shield while playing the Dagger like a fluted instrument.

Tommy’s uniform was equipped with a metallic chest plate colloquially named the Dragon Shield. This armoured plate increased the uniform’s durability, accelerated the wearer’s healing rate and when activated by the Dragon Dagger could project a potent force shield that reflected any and all attacks back at their originator.

When necessary, Tommy could transfer the Dragon Shield to any of the other Rangers’ uniform by simply touching them and willing the transfer to occur.

When faced with one of Rita’s giant creatures, Tommy would pilot the mighty Dragonzord. Dragonzord was a giant robotic warrior that closely resembled a bipedal tyrannosaurus. Dragonzord was incredibly powerful; it could easily shatter buildings with a single swing of either its arm or tail.

Its armaments were simple; each one of its 5 fingers was actually a missile launcher and a wicked drill tipped its long and agile tail. When absolutely necessary, the Dragonzord could combine with the other Power Rangers’ Zords in order to form Dragonzord Battle Mode, the Mega Dragonzord and finally the Ultrazord.

Finally, Tommy utilized a Wrist Communicator to keep in close contact with his fellow Rangers and Zordon in the command centre. The communicator appears to be watch-like device that Tommy wore on his left wrist.

In addition to its standard cell-phone like features, the Wrist Communicator could access the Rangers’ Command Centre’s Teleportation system remotely. This allowed Tommy to teleport wherever he needed to go at will.

When not in use, Tommy’s Green Ranger uniform presumably existed invisibly and immaterially about his body. In order to cause the suit to manifest itself in the material world, Tommy must hold aloft his Dragon-Morpher (which contains his “Power Coin”) and utter the command “Dragonzord.”

Until he did so, Tommy was a normal human teenager and was quite vulnerable to conventional injury.

Thomas “Tommy” Oliver first moved to Angel Grove, California during his freshman year in high school. Upon his arrival he enrolled in the local high school, Angel Grove High, as well as a local marital arts tournament that was held at the local youth centre.

He was a standout at the tournament and easily made it into the finals. It was there where he faced Jason Lee Scott for the first time; the two youths fought to a tie and earned each other’s respect.

Tommy’s fight with Jason gained the attention of Rita Repulsa (the Power Rangers’ main antagonist) who immediately saw great potential for both good and evil in the young man. On a whim, she decided to transform Tommy into a Ranger of her own.

Rita could not wait to use her newest “weapon” in battle with her foes. She revealed the Rangers’ secret identities to Tommy and ordered him to attack them with his full fury.

Tommy eagerly complied and in quick succession he: invaded the Rangers’ headquarters, neutralized their alien leader Zordon and utterly defeated all 5 of the Rangers in hand to hand combat. 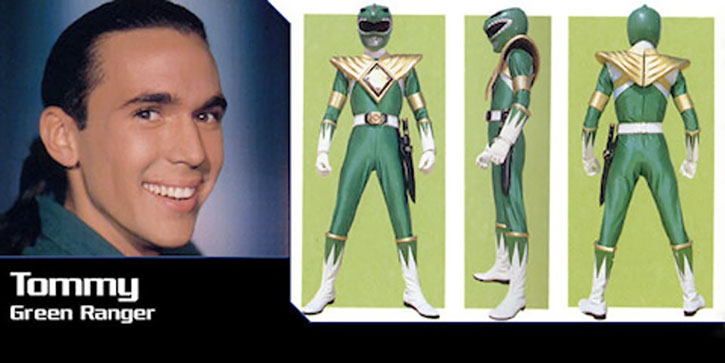 For some unknown reason, Tommy chose to spare the Rangers’ lives that day. Rita, amid growning concerns over Tommy’s actions, decided to give him the “Sword of Darkness,” and evil artifact that intensified not only his already formidable powers but also the spell that held him in her thrall.

Tommy then participated in a series of cruel cat and mouse games with the Rangers. He attacked them time and again, until their resolve had weakened to the point where he was able to strip them of their Zords (the giant robots they piloted into battle).

It was in that battle where the Rangers caught their first true break with their seemingly unbeatable foe; they discovered that Tommy was the Green Ranger.

The revelation of Tommy’s identity set the Rangers on a different path. Instead of focusing on ways to defeat their enemy, they youths decided to save him from Rita’s machinations. When the Rangers confronted him in his civilian guise, Tommy used the Dragon Dagger to summon the Dragonzord, and set it upon a path of destruction throughout Angel Grove.

It was that moment that fate intervened, and Zordon made a miraculous recovery from Tommy’s previous assault. Zordon used his powers to restore the Rangers’ Zords, and with their giant mecha back in hand the Rangers halted the Dragonzord’s rampage.

With the Dragonzord neutralized, Jason (the Red Ranger) confronted Tommy in person. The two young warriors came together with the force of a thunderclap, trading titanic blows and blasts of power from their weapons.

Though Tommy seemed to have the upper hand throughout most of the fight, Jason weathered the brunt of Tommy’s attacks and eventually staggered him long enough to destroy the Sword of Darkness.

As he came to his senses, Tommy’s guilt over his actions threatened to overwhelm him until Jason and the other Rangers convinced him that it was Rita who was truly responsible. They then extended him the honour of becoming a true Power Ranger. Realizing that he still had the powers that Rita gave him, Tommy accepted and became the sixth Ranger.

With Tommy’s addition to the Rangers, they seemed to be unstoppable. Nothing that Rita threw at them could stop their united might. Tommy’s presence reinvigorated the group, and over time he grew especially close to Kimberly who he eventually began to date.

Eventually, Rita decided to reclaim the powers that she had bequeathed to Tommy. Using her magic, she linked the “Green Ranger” power to an enchanted candle that would return Tommy‘s powers to Rita once it had been completely consumed. The Rangers did their best to thwart Rita’s plans, but ultimately fell short.

Tommy however was unwilling to let Rita win. He transfered the remnants of his power to Jason in the last seconds before the candle was completely consumed, preventing Rita from reclaiming them. With that Tommy left the Rangers, though he stayed close friends with the group and continued to maintain his relationship with Kimberly. 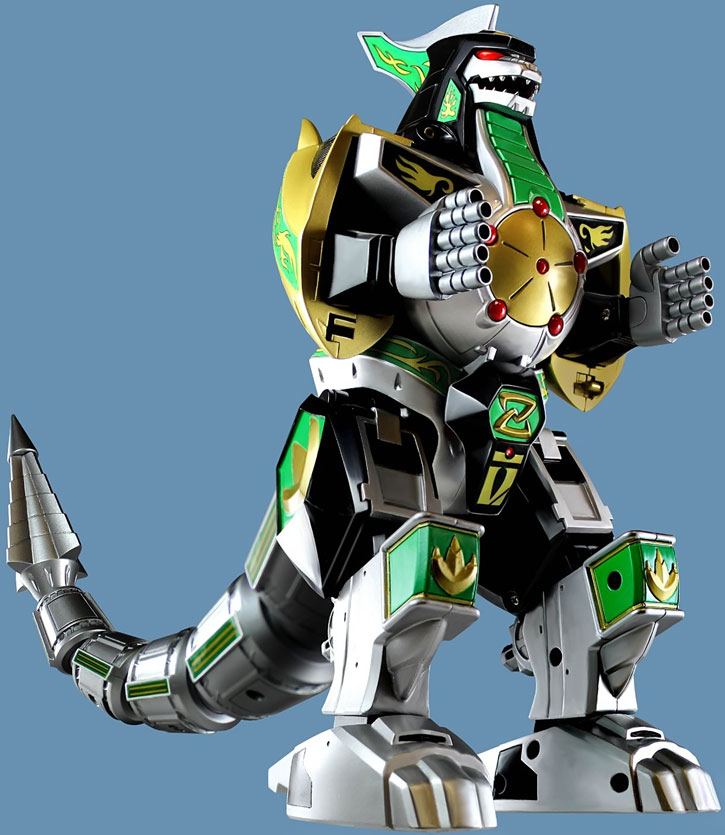 Return of an old friend

Jason wielded the power of both the Tyrannosaurus and Dragonzord for a time, until Rita kidnapped the Rangers’ parents and forced them to surrender their coins to her. Jason reluctantly gave up his own coin to Rita, but cleverly kept the Dragonzord coin hidden away.

As Rita and her forces ravaged Angel Grove, the Rangers called upon Tommy once more to wield the powers of the Green Ranger.

Using Zordon’s life force to fuel his abilities, Tommy retrieved the other Rangers coins and put an end to Rita’s plans. In the course of doing so, Tommy’s powers were seemingly restored. In reality, his re-empowerment was temporary and eventually his Green Ranger powers were permanently lost. Crushed, Tommy left Angel Grove in order to gain some peace of mind.

Barely a week into his rest, Tommy found himself teleported back to the Rangers Command Centre where Zordon and Alpha gave him a new Power Coin that they had forged themselves. Tommy eagerly accepted the new coin, powers and responsibility that came along with it.

With Tommy’s acceptance of his new role, Zordon summoned the other Rangers who were overjoyed at the return of their friend. With that Tommy, the White Ranger, was made the new leader of the Power Rangers.

Tommy appears to be a good-looking caucasian teenaged boy. He is taller than average height for his age, and possesses a lean athletic build.

His hair is dark brown, and continued to get longer as the series progressed. Initially, his hair was just long enough to touch the back of his neck, but eventually it grew down to his shoulders. When expecting conflict, Tommy wore his hair in a pony tail.

When Tommy was in possession of the Green Ranger powers, he exclusively wore green in all of his outfits. He tended to stick to dark green jeans and muscle shirts. Occasionally, he wore lumberjack shirts.

Tommy’s Green Ranger Uniform was a green form-fitting spandex body suit. Three white diamonds were featured prominently across the chest, upper shoulders and the middle of the back of the costume. The hands and forearms of the costume were covered by a pair of white gloves that had green triangular diamonds at the upper end of the gloves.

His feet were covered by a similar pair of white boots. Situated around the middle of waist sat a pure white belt that held his morpher in the place of a belt buckle.

Unlike the other Rangers, Tommy’s uniform was accessorized with the Dragon Shield. The Dragon Shield was golden in colour and covered Tommy’s upper chest and back. It was triangular in shape, with a large diamond shaped section that lies in the centre of his chest. The diamond had black highlights around its outer edges, and an unknown Kanji character in each of its corners.

Two golden bracers, that complimented the Dragon Shield, sat prominently on each one of his biceps.

Tommy is genuinely a good kid. He’s heroic and self-sacrificing to a fault. Time and again, he’s proven that he’s willing to sacrifice his own well being in order to protect his friends and the citizens of Angel Grove. He is focused, determined and will never walk away from a fight.

Tommy: “I have to morph, Zordon. Powers or not, I just can’t stand by and watch my friends be destroyed. Kimberly can’t hold out much longer on her own.”
Alpha 5: “But Tommy, it’s much too dangerous !”
Tommy: “I don’t care. I’m a Power Ranger ’til the end.”

“You know there was a moment back there when I almost gave up. But then I realized, it’s not just the costume and powers that give me strength. It’s who and what I am inside that really empowers me.”

The Dragonzord was a giant robot that Tommy could remote control in battle, or pilot directly when necessary. 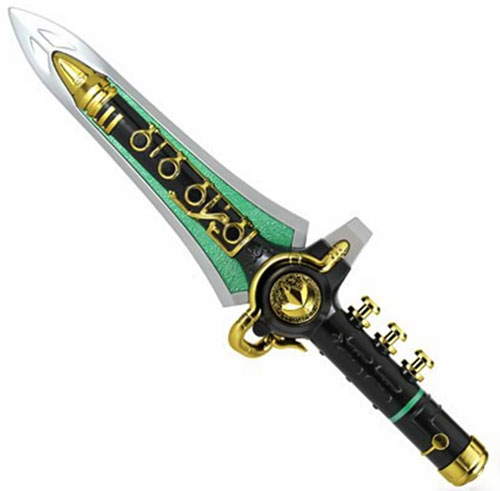 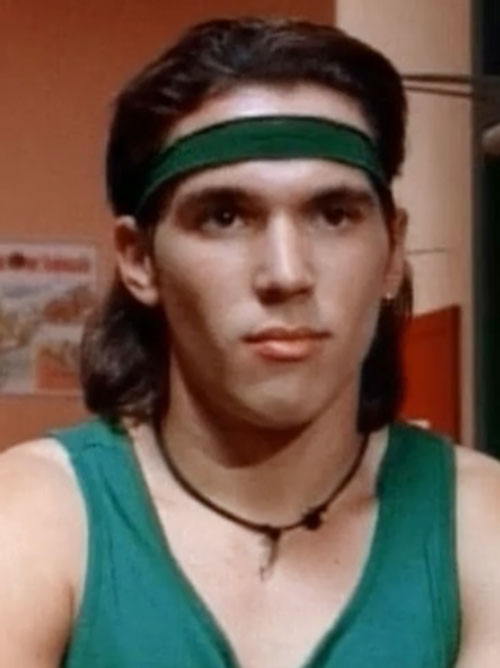 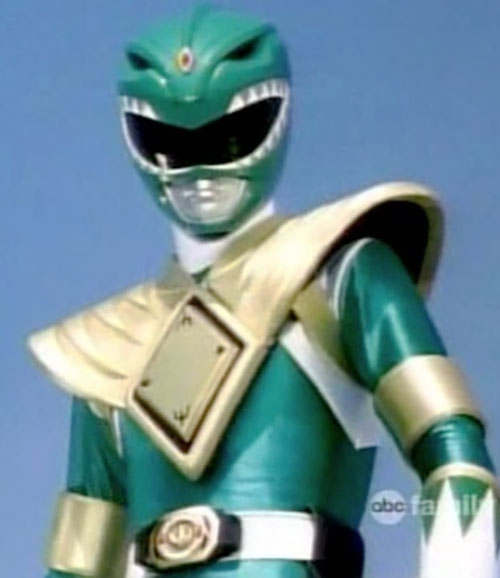 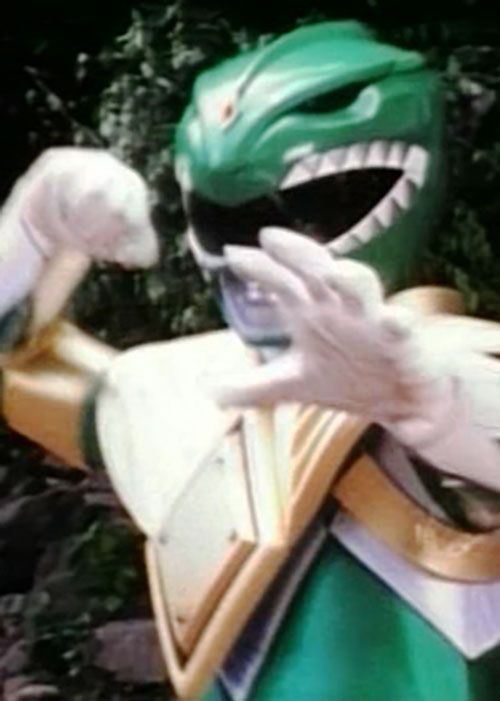 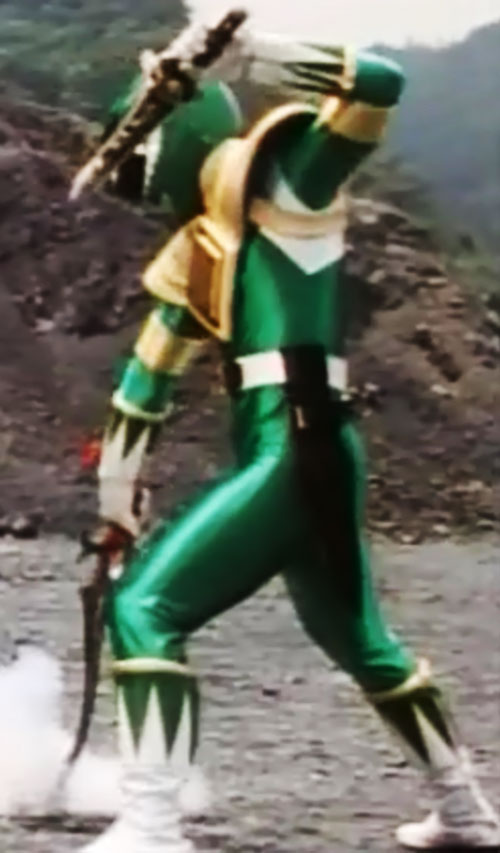 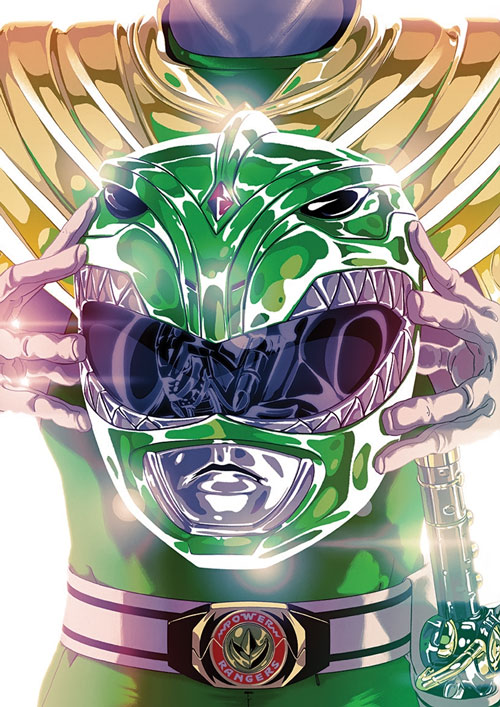 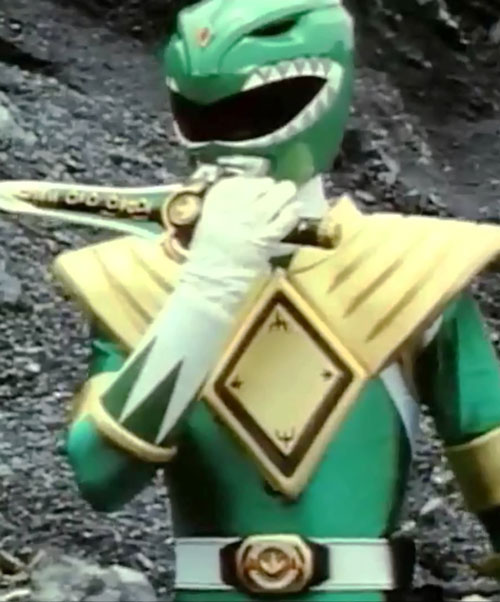 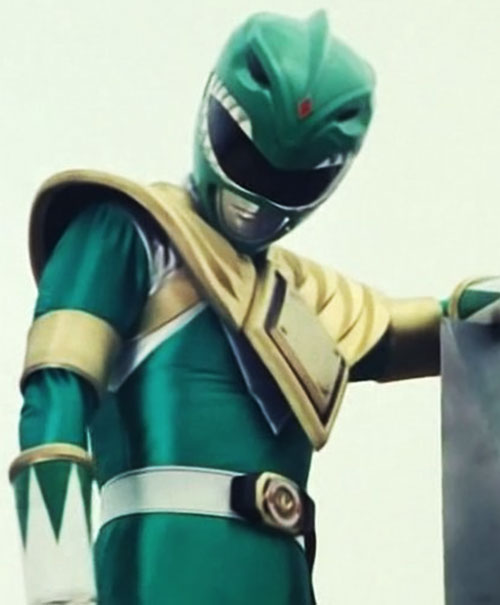 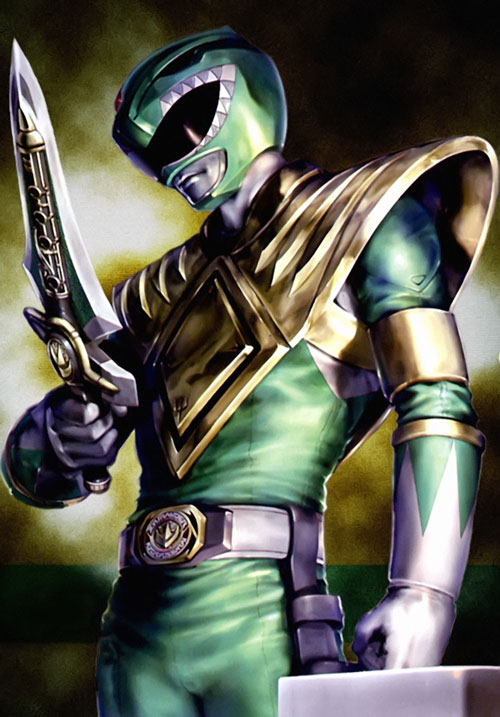 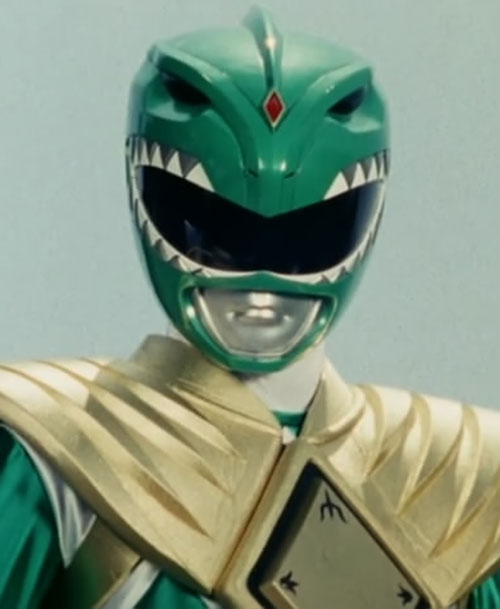