These enigmatic creatures are monstrous-looking giants.

Their steel-hard skin can soak any common attack. Even machinegun fire (presumably a Vickers .303) was ignored.

The giants are incredibly strong, able to hold most persons in one hand. And they were at last as fast as the wartime Bucky (James Barnes). A pack of them can rout an army.

Captain America (Steve Rogers) could knock them off their feet if he used his full weight and strength, but he wasn’t actually wounding them.

However, the giants will be immediately slain by sufficiently powerful sounds occurring close to their head. This is often achieved by throwing explosives at their head. And a loud shockwave from a black powder cannon was sufficient to kill multiple giants at range.

Yet .303 gunfire didn’t qualify, though it might have worked had the weapon been fired point-blank. It may be because how loud firearms are is routinely underestimated in fiction.

This vulnerability was puzzlingly explained as a result of the giants living in a world without sound. They are indeed completely mute.

On the other hand, they could understand an unspecified Tibetic language. Since their Americans discoverers knew it it is presumably a common one, such as Ü-Tsang.

The nature of the Giants is unrevealed. They might be an Inhuman subrace. Or just a rare species like their sort-of-neighbours, the Cold People from Fantastic Four v1 #145.

These Tibetan humanoids (called “Oriental Giants” or “Ageless Orientals” in the 1941 story) were located in 1940 by two American bankers, Benson and Finley. The pair had been exploring Tibet looking for these “walking mountains” people. The giants reputedly could not die of natural causes.

They apparently had been on that quest for a while. They spoke at least one Tibetic language and Finley had correctly theorised that loud sounds would be harmful to the giants.

This theory was put to the test when Benson, Finley and two others found the walking mountains. The giants tried to oust the intruders, and gunfire proved futile against them. The giants killed the first two mountaineers. Finley then threw large firecrackers at them, killing two and terrorising the others into obedience.

The bankers returned to New York, and Benson had a group of giants discreetly shipped after them. These arrived in April of 1941. After Benson had a special investigator on his trail killed by the giants, Finley wanted out. But Benson just had a giant kill Finley.

The murder of the agent drew the attention of special government investigator Betty Ross. Ross found herself chased by two giants, but Captain America (Steve Rogers) and Bucky (James Barnes) intervened and narrowly repulsed the creatures.

On the next day, due to an unrevealed mishap, a giant attacked an Army camp near the city. He was killed by Bucky using a grenade. Since the cat was out of the bag, Benson launched a wave of murderous bank robberies. His giants stole huge quantities of cash and killed anybody in their way.

Intervening, Captain America let himself be captured. Bucky shadowed the giants as they took Cap back to their master. In the ensuing confrontation, Cap and Bucky killed the giants using the extremely loud black powder cannon Benson used to threaten his henchmen into servitude.

Benson was also killed as the blast collapsed the ceiling.

Drawbacks:
Fatal/Attack Vulnerability (Loud noises are a Killing Attack against the giants – double the APs and use these as AV/EV ; explosives use their EV or Bomb as the score to be doubled), Strange Appearance, Exile (Involuntary), Serious Physical Restriction (Wholly mute). 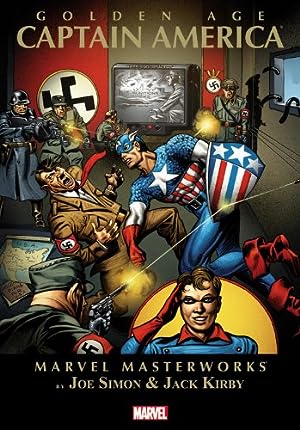 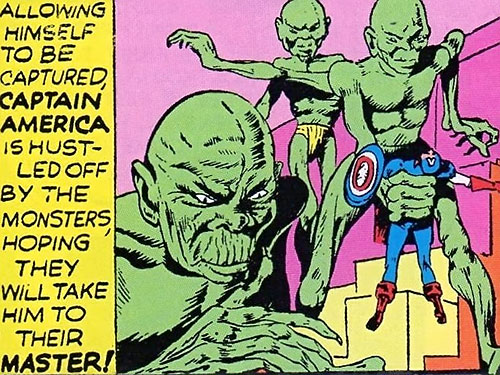