Gremlins are, as far as can be figured, genetically engineered, reptilian creatures who got out of control. They multiply asexually when in contact with water, possess a highly manipulable genome, and have a bend for destroying technology. They can be found nearly anywhere at any time, if one is looking for them. They work well in groups, but have only a rudimentary intelligence, individually. 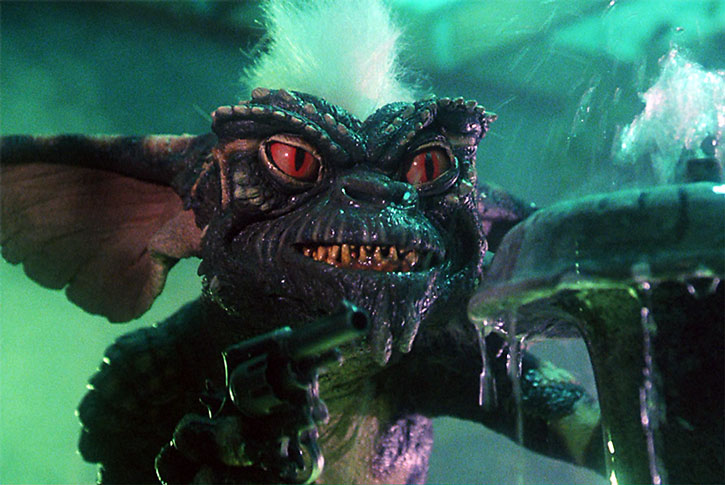 Many of them start out as Mogwais, though, who are fairly harmless unless they eat something between midnight and dawn, local time. Gremlins genetics has been known to spontaneously change in the presence of animal hormones and energy samples (samples of matter may produce a similar effect). Some documented changes are:

The history of the Gremlins and Mogwais is unknown. It has been theorized that they are discarded alien experiments in genetic engineering, dumped in the backwaters of China. From there, they may have spread across the world in dark corners, sometimes as pets, but often wild.

What is known is that, in World War II and forward, military men used to know all about Gremlins. They knew these creatures would destroy and sabotage their equipment when nobody was looking. These may be the same Gremlins, or they may be an entirely different sort of creature.

However, regardless of their origins, in the early 1980s, a Mogwai was given to a teenager in a sleepy town around Christmas time. Unable to control the situation, though, the Mogwai (named Gizmo) was accidentally forced to birth a horde of the critters, who were quickly transformed into their reptilian brethren. 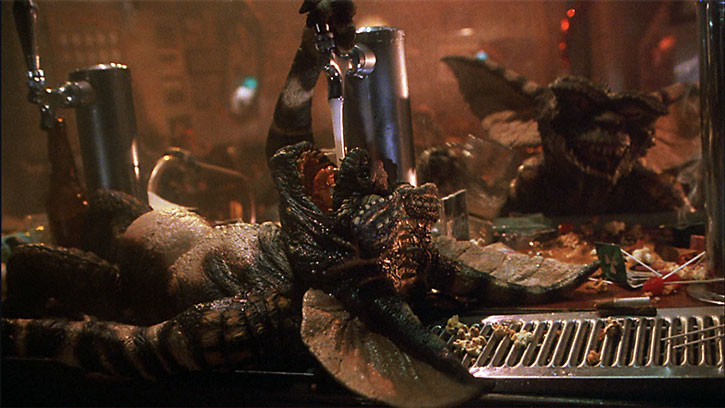 Together, the creatures terrorized the town, only to be driven back by the teenage boy and his girlfriend.

Of course, they brought Gizmo with them, who even managed to accompany Billy to work. Of course, he again managed to accidentally reproduce, and those new Mogwais managed to turn into Gremlins. Worse, the new Gremlins got their claws on a full genetic engineering lab, and many transformed themselves in terrible ways.

Clamp Tower was only barely saved from destruction by those same few people from the sleepy town, Gizmo himself, Daniel Clamp, and a small group of his staff.

They’re semi-demonic looking, reptile creatures, with huge pointed ears, a gaunt body, and articulate fingers. Unless they’ve mutated, in which case they look like a cross between that, and whatever they’ve mutated into. 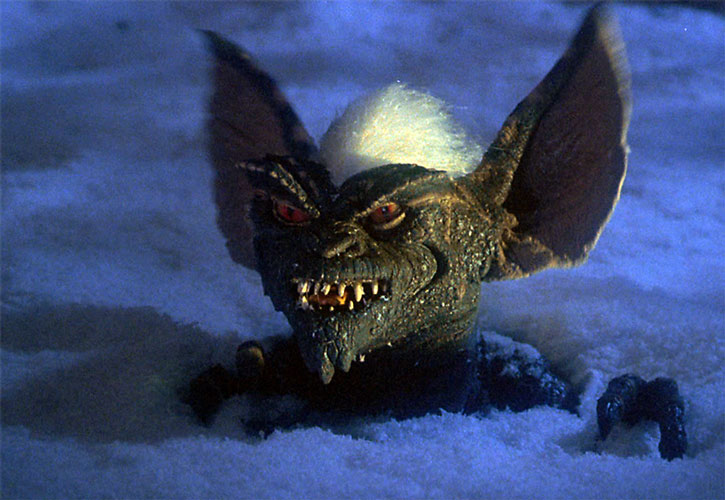 There is no known relation between them and the AMC automobile by the same name. Or, for that matter, the Warner Brothers cartoon race of creatures who definitely were intended to be the equipment-destroying creatures of World War II.

Mogwais are adorable little primate-like creatures. They are covered in brown and white hair, and with huge ears and eyes. They seem to be more intelligent than their counterparts, and can even sing.

Picture a bad-tempered two-year-old boy, with delusions of grandeur, and in desperate need of something fun to do. Now make him reasonably evil, and give him claws, and you’ve got it.

In contrast, Mogwais are too cute for words. Probably too cute to let live, at that…

(The “Brain Gremlin,” after shooting another Gremlin in the head) “Now, was that civilized ? No, clearly not. Fun, but in no sense civilized. Now, bear in mind, none of us has been in New York before. There are the Broadway shows—we’ll have to find out how to get tickets. There’s also a lot of street crime, but I believe we can watch that for free. We want the essentials. Dinettes. Complete bedroom groups. Convenient credit, even though we’ve been turned down in the past.”

Perhaps Mxyzptlk dropped off a rather substantial number in the waterways of the JLA Watchtower, and they make their way into the Trophy Room and Teleportation System. Now *that’s* comedy! Since Gremlins were supposedly around during World War II, they might also appear in a Golden Age  adventure, as well.

As a followup to this, Gremlin DNA could actually have been used by Vandal Savage in order to bind the JLA and JSA DNA to Damage. Which means that Damage might be able to produce other abilities and, there might be other creatures out there with the powers of the JLA and JSA.

Clearly, Donald Trump (a.k.a. Daniel Clamp) was more scarred than he admitted at the end of Gremlins 2. Rather than risk attack by Gremlins again, he decided to be prepared.

Buying out and taking control of all the firms in Trump—I mean “Clamp” Tower, he grew his hair and beard out. He began delving into genetic research of all sorts, particularly when his young son’s hair fell out during a midwestern meteor shower.

Later, when that same son had several embarrassing fallouts with the law, the boy (now a college graduate) was “exiled” to the Kansas town of the meteor shower, and the Trumps changed their family name to “Luthor.”

Kryptonite on “Smallville,” is merely a ruse. The various kryptonite-based “freaks” are, in fact, recipients of Gremlin gene splices.

What ? Both Clamp and Lionel Luthor are played by John Glover, and this makes a heck of a lot more sense than The Apprentice or Trump University ever could…

Advantages:
Lightning Reflexes, Sharp Eye, Misc (When touched with water, 2-6 new Gremlins are “budded” off the parent Gremlin’s back—The Gremlin cannot do anything for one Phase when this happens), Misc (Making an Unskilled Attempt at using a DCH/BoH Skill is only a -1CS Penalty for a Gremlin), Misc (A Gremlin may make an Unskilled Attempt at the normal -2CS Penalty for a Skilled Power, given a sufficient rationale for it).

Advantages:
Attractive, Misc (Mogwais reproduce just like Gremlins, but the offspring are more chaotic than the parent), Misc (Like Gremlins, the Mogwai only has a -1CS Penalty to Unskilled Attempts, but cannot attempt Skilled Powers).

Misc. Advantage used for reproduction because modifying Split was too darn confusing to bother with for this case.

Source of Character: The movies Gremlins and Gremlins 2: The New Batch. 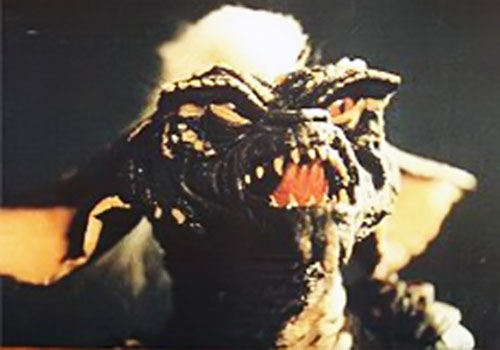 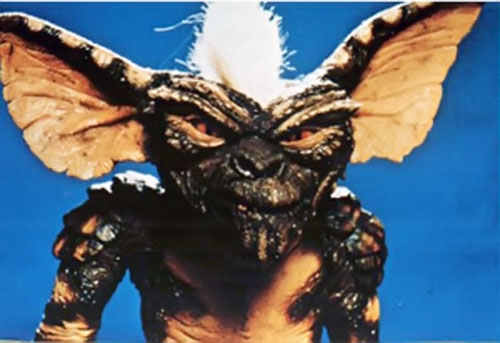 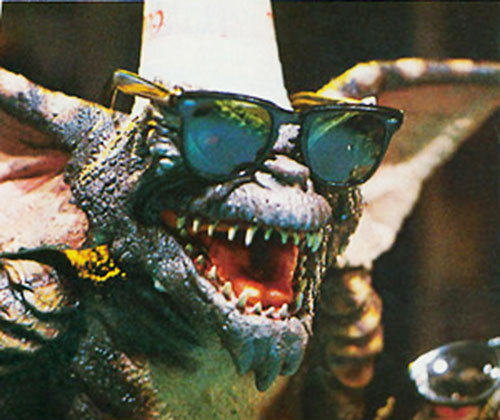 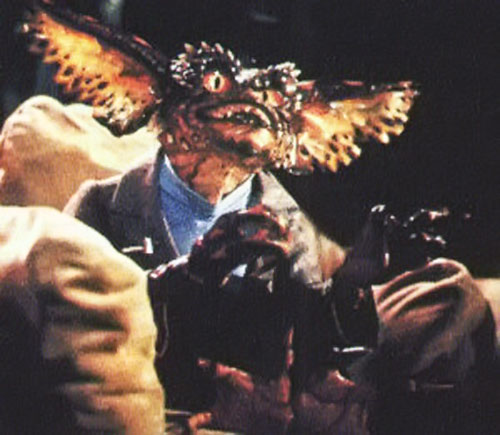 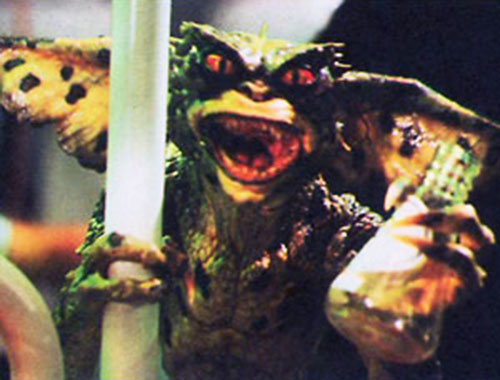