Originally he was an unstoppable, master criminal and murderer à la Fantômas . Over time the stories blossomed into a complex universe with multiple main characters, a timeline extending into the far future, and “Grendel” evolving from a given character to a sort of demonic metaphor for man’s aggression. Its atmosphere is dark and brutal.

This profile was written during the 1990s, and thus follows different conventions than we now do.

“Police autopsy reports suggest his capabilities were based on some type of advanced genetic mutation, resulting in a much higher usage of our almost limitless mental capacities.”

Hunter Rose was a man without a peer, the only one of his kind ever born. The only foes whoever matched him were the wolf, Argent, and in one tale the Batman.

The man who would be Grendel is believed to have been born by the name Eddie to an ordinary couple in an ordinary Midwestern town. However, he was anything but ordinary.

A few of his amazing accomplishments include memorizing the phone books of over a half-dozen counties at 4, being able to quote any line from Shakespeare by 6, writing over a dozen plays and short stories by 8, as well as developing several manuscripts for novels.

Unfortunately, this young prodigy’s actions went unnoticed by his parents and those around him. And so seeking solace from his boredom he entered the realm of competitive sports.

Eddie became a world class fencer and even threw an international competition in London out of boredom. It was here that he met Jocasta Rose, the trainer for the British team. Eddie was merely 14 as contrasted to Jocasta’s 36. She swept him off his feet and seduced him. Eddie and Jocasta were together for 13 short months before she succumbed to a terminal illness.

“The death of his lover devastated the young genius, but her fiery spirit lingered in his soul – her will to fight and achieve was twisted by his grief into a monstrous and insatiable ideal.”

He adopted the name Hunter Rose and returned to America where he rapidly became a renowned writer at the age of 17. At the same time the crime families of Manhattan were introduced to a new and deadly assassin, Grendel. In less than two years he had taken over one of the major families, and ruled over most of the criminal activities in the entire metropolitan area.

And then it happened again, he began to grow bored. During this time Hunter Rose encountered the two people who would bring about his final demise.

A local real estate mogul, Barry Palumbo, attempted a double cross of Grendel and the man-wolf, Argent. However, shortly before he could realize his goal, Palumbo drank poisoned brandy at a party at his estate. Hunter Rose happened to be attending the party as well and discovered Palumbo’s orphaned niece, Stacy, in a state of shock hovering over Palumbo’s corpse.

Overwhelmed by sympathy for the young child, Grendel took the catatonic child from the party as the police arrived. He paused in the garden to send instructions to his men when Argent, who had been summoned to the estate by the police, crossed into the garden as well. The two battled for the first time ; a battle which ended with Argent wounded and the garden catching fire.

As Grendel fled from the scene he noticed that young Stacey had disappeared. He learned from a nearby cabbie, who he afterwards killed for not getting involved, that she had been taken by Bernie Gene, a small-time pornographer and pedophile. Grendel confronted Bernie and killed him rapidly before returning her to the estate and blending back into the crowd as Hunter Rose.

After the part Grendel was confronted by Larry Stohler, who would soon become his only friend (if such a term is applicable), who explained how he had covered for Hunter’s disappearance and diverted police suspicion. Larry quickly became one of Hunter’s few confidantes.

Two weeks after the murder, Hunter applied for the legal adoption of Stacey. Though only 18, Hunter had crafted a complete persona around himself and managed to become Stacey’s legal guardian. Meanwhile, public backlash caused Argent to slowly retreat into the shadows.

As Argent became more and more reclusive, Grendel prospered and his empire expanded further. And he began to hunt the wolf. Finally Argent returned and once more gained the good graces of the public. 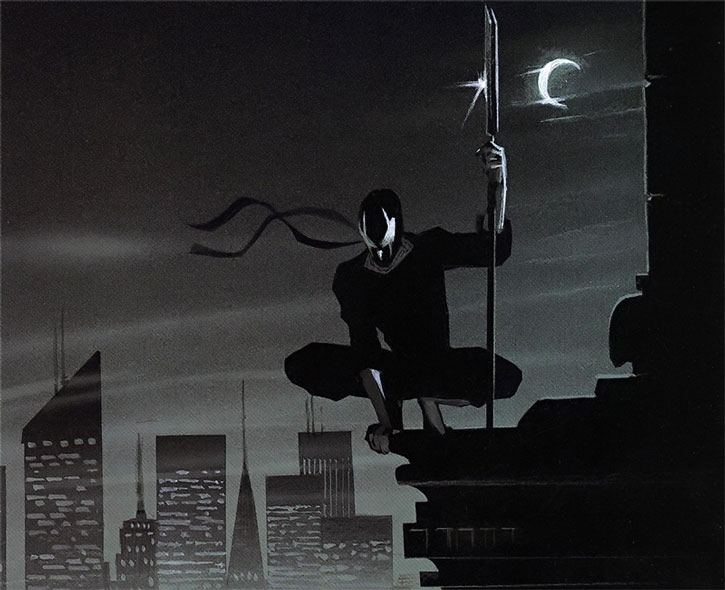 The two clashed back and forth for seven months with neither gaining the upper hand. However, unknown to Argent he entered his enemy’s home regularly when he went and visited young Stacey, with whom the wolf had become fast friends.

Shortly thereafter word leaked that Grendel was going to personally assassinate a local movie maker, Anson Reynolds. The hit was supposed to take place at Reynold’s estate. Reynold’s ignored the news and held a large party to announce several new film projects and the press flocked to the estate.

Security was tight and Argent had been summoned once more. As Reynold’s spoke to the collected media Argent scented his foe and leapt at him as Grendel was apparently poised to strike through the skylight.

Instead he fell through the skylight and fell into the main ballroom as the press recorded every moment. Argent had fallen victim to Grendel’s ploy. Unfortunately, the event also backlashed as young Stacy’s image of the man-wolf shattered and she withdrew into herself.

Despite all of Hunter’s attempts Stacy sank deeper into depression and melancholy. Argent, meanwhile, renewed his attack against Grendel’s empire with increased fervor and violence.

For two and a half-years Grendel and Argent clashed time and time again, their battles gaining near legendary status. Finally in a master plan which culminated into the murders of 23 criminal bosses, an event which was dubbed the Seaboard Massacre, Grendel expanded his empire to stretch from Montreal to Cleveland to Atlanta.

Grendel recorded a message in which he claimed responsibility for the Massacre and sent the copies to all the major cities which his empire now covered. Unfortunately, Stacy overheard the taping of this message.

Stacy then began to investigate what this “Grendel” was, now that she knew who he was. She lapsed into further melancholy before finally recovering. Even the death of her short-lived nanny did not appear to dim her renewed light.

Then for weeks she carefully spied upon Hunter and gained access to his private logs. As she read the logs all of the truth burrowed into her and she decided to kill Grendel.

By keeping a close eye on Hunter’s logs she began to keep abreast of his operations and anonymously informed Argent. Finally, Stacy laid the final trap by calling in to Argent’s private line claiming to have been kidnapped by Grendel himself. After waiting a few moments she called in as the anonymous informant.

Argent destroyed one of Grendel’s counterfeiting operations, leaving one survivor to let Grendel know to contact the man-wolf.

Grendel called and the wolf revealed that he knew that Grendel (note Grendel, not Hunter) had the child. The two agreed to meet on a rooftop alone for one more battle. Larry attempted to prevent Grendel from going but the enraged Grendel would not be stopped.

“And thus in silence, according to Argent, occurred the infamous final rooftop battle of the wolf and the man who was Grendel.”

At 6:09 AM the police who finally heard the challenged Argent issued to Grendel arrived on the rooftop battleground. Argent was wounded at the base of his spine and permanently paralyzed while nearby was the unmasked and dead Grendel.

Grendel’s empire collapsed instantly and Argent, now confined to a wheelchair, withdrew from public sight. Stacy was institutionalized for the next 11 years. She apparently recovered and married her therapist. On their honeymoon she was brutally raped by her new husband who then hung himself in the shower.

Stacy relapsed into melancholy even after the birth of her daughter and eventually died in an institution. Her daughter’s fate is another story…

Hunter Rose is a formidably charismatic and elegant gentleman with black hair (with a small streak of white just above his right temple) and green eyes. In his civilian ID, he walks with a limp and has a cane. His Grendel clothes are a simple featureless black suit with white gloves and boots, and of course the Grendel masque.

“And so he achieved and achieved and achieved. And was soon bored off his ass.” Hunter Rose was motivated from boredom. He sought bigger and harder challenges throughout his life. He rose through the ranks of crime in no time and expanded further and further merely to see if he had any limits.

He finally found the challenge he sought when he and Argent crossed swords. Even his journey into Gotham and his battle with Batman were merely done in search of a challenge.

In a campaign, Hunter Rose is best played as a mastermind behind a labyrinth of Machiavellian plots and machinations (I’d advise finding the first Batman/Grendel crossover for perfect evidence of this). He always chooses to manipulate others into acting to his benefit despite their efforts to break free from his grasp.

He always has at least two backup plans (such as painting the Grendel masque over his feature so his identity would be preserved when Batman unmasked him). He basically knows what you’re going to do even when you don’t.

In combat, he is a graceful dancer weaving a pattern of death. He killed almost half a dozen police officers within seconds despite the fact that they had him completely surrounded and covered at gun point. He is extremely dangerous and his appearance in a combat situation usually leads to at least one death.

During his career, Grendel crossed paths with a young Batman who Grendel sought to test. The two seemed evenly matched though Grendel did gain the upper hand at one point. However, in the end Grendel, after endangering a young child’s life, abandoned his game and returned home to New York (this was early in Batman’s career, btw.)

As to the future of the Grendel mythos and how it fits into DC continuity, the spirit of Grendel existed in various forms and hosts during the thousand years before the rebirth of the Hero with the Legion. Perhaps the coming of the Grendel Khan and his empire were but footnotes of that wild time from which little if any history survived. A thousand years is a long time.

“Grendel’s existence is lamentable. He burned with a potency that rarely emerges in society… He is the demon of society’s mediocrity.”

This very old entry was a result of seizing the Batman/Grendel crossover to establish benchmark game stats for Grendel (Hunter Rose). It was considerably developed when Alex wrote a short essay on the character – which became the History section of this entry.

Quotes taken from Devil By The Deed and Grendel Cycle both written by Matt Wagner. Grendel property of Matt Wagner. 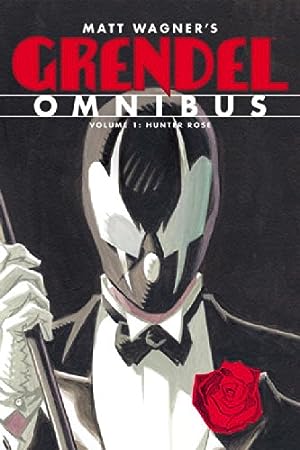 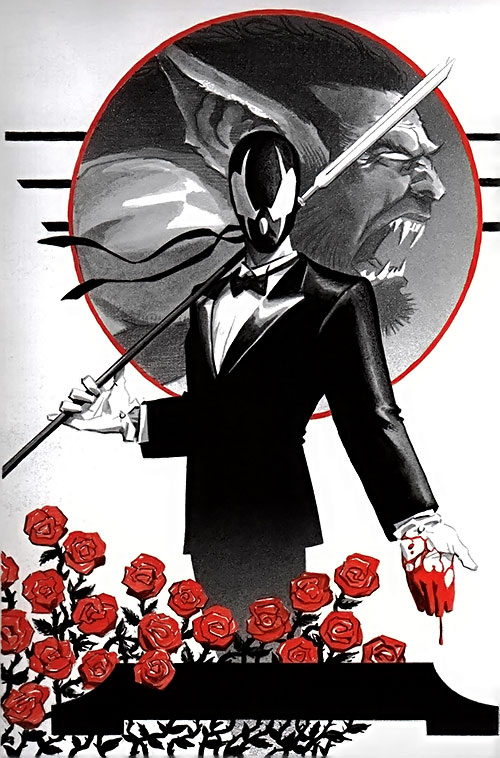 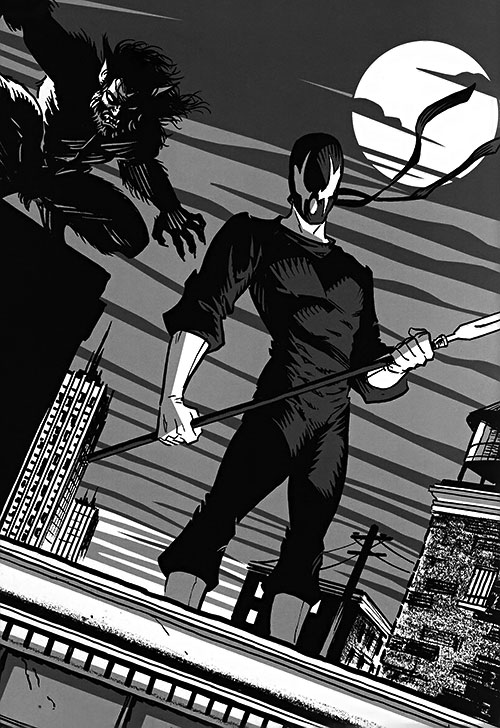 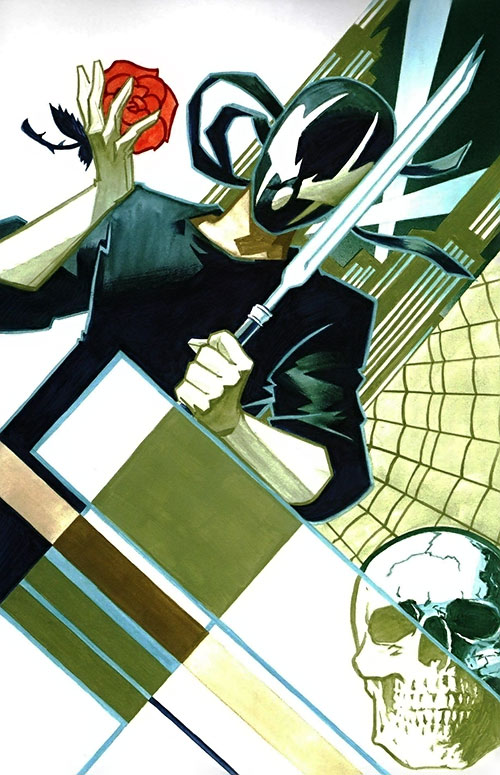