Greyfox is a highly skilled, intelligent international hitman. He’s an excellent marksman, a judo expert and a proficient manhunter. His greatest assets are his power of observation, and his intellectual speed and agility.

Greyfox has extensive underworld contacts around the world. With a few phone calls can have numerous lowlives start inquiring about a given subject. Likewise, when setting up a kill he will usually have a pair of heavies as security, plus a getaway vehicle with a driver or pilot and some extra weapons. All will be procured locally and quickly, and be of reliable quality.

He’s very professional and, unlike some people I could name, checks his kills. All in all, he would have killed Nemesis if not for some very odd strokes of bad luck.

In the early 1980s, Renard Traquer was a legendary hitman, an assassin who never failed an assignment. It was said that the only place that was safe for a person targetted by Greyfox was the grave.

Greyfox was hired by Ms. Scarfield of the Council. The job was to track down and eliminate Nemesis, a tricky vigilante who had already eliminated several division heads of the criminal consortium.

The hitman quickly located a weakness in Nemesis’s security. He interrogated the brother of Valerie Foxworth, a young woman who had been spotted with Nemesis some weeks prior. Following Mr. Foxworth as he tried to reach his sister, the wily Greyfox expected to be ambushed by Nemesis and trap him in return.

This nearly worked, but Nemesis used gadgets and disguises to escape.

Traquer renewed his efforts. He documented and sketched Nemesis’s known appearances, had numerous criminals track down an helicopter Nemesis once stole from the Council, watched known and suspected Nemesis informants, etc..

A second trap was set up. But Nemesis escaped death thanks to a remarkably heroic bystander who spoiled Greyfox’s aim as he took his shot.

Greyfox was seemingly killed in an exploding helicopter. While comic book tradition means that the odds of survival are pretty good, he was never seen again.

Greyfox is chiefly motivated by the challenge of crossing swords with intelligent and capable adversaries. Most of the everyday aspects of being an international hitman seem to bore him, and he evidences a barely restrained contempt for many of his clients.

This does not apply to the rare female customer, though, since he’s generally chivalrous.

Greyfox’s reputation is such that his clients have to come to him, and he doesn’t have to bother with sales effort or treating his customers well.

Traquer is very intelligent and quite ruthless, knowing that interrogating civilians with ties to his target and forcing them to help with his plans (knowingly or not) is the most efficient way to get what he wants. Still, he’s concerned with his plans having a certain elegance.

“If you would cease interrupting, mon ami… you would learn that your Ms. Scarfield has engaged my services to track down and kill the one you call Nemesis.”

“Now listen carefully, monsieur… This Mr. King you mentioned who owns the copter – you are to call him, tell him to come here to the airport.”

Source of Character: DC Universe (Nemesis stories in The Brave and the Bold volume 1). 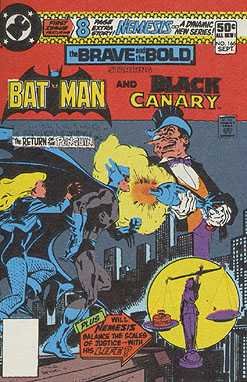 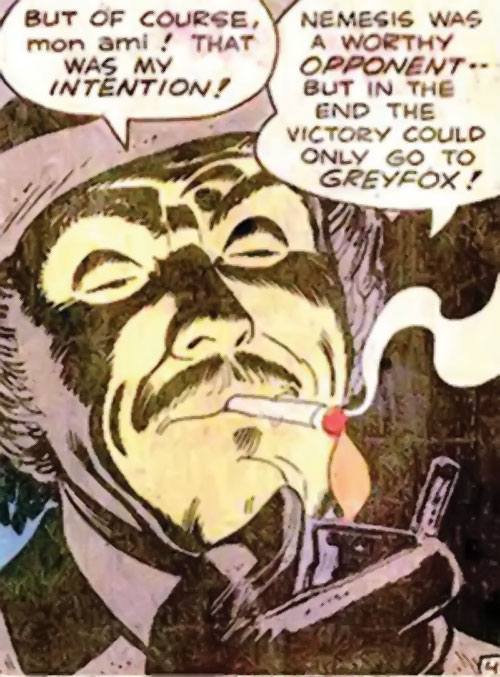