The Grifter’s ageing has been slowed by an unknown factor. Presumably that was either due to Zealot’s intervention or his exposure to the Gen-Factor. The resulting physiological alterations seem to have left him abnormally resistant to damage and pain and gifted with enhanced reflexes.

He may also be the premier agent in the Wildstorm world, specializing in myriad forms of combat and the most spectacular side of the espionage trade. And he’s a Coda-trained fighter.

Cole Cash, from Chicago, is the oldest of the two Cash children (the other being Max, aka Condition Red). Their father, Jacob, a con artist, was killed when they were young and their mother remarried (to Del Gracci, the man who killed her husband, as they would later learn).

Cole’s life became a living hell and he left home when in his teens. He learned to work the streets, became a criminal (mostly as a getaway man) and lived by grifting. He was finally captured when he was 17 at most.

The police agreed to be lenient with Cash since his stepfather bribed them. He was sent to the Army to be part of an elite squad. Cash later graduated to I.O.’s über-elite Team 7. Team 7 served for some time before being deliberately exposed to a biochemical agent (known as the Gen-Factor).

After recovering from the effects of their exposure, most members of the team began to develop powerful psychic abilities. Eventually, they learned that their exposure was part of an experiment being performed by Craven, the head of I.O.. This culminated in Team 7 being forced to survive a low yield nuclear missile. The team then went AWOL.

As time passed, Team 7 eventually returned to work once again for I.O. and encountered other “soldiers” possessed of similar psychic powers. Finally, after a mission involving eliminating a Russian scientist responsible for the Russian equivalent of the Gen Factor, Team 7 disbanded for good.

Its members then went into hiding when they learned that Craven was after their children.

More than a woman

Cole went on to do his own thing for a while, before eventually meeting Zealot. Zealot trained Cole in the ways of Coda (making him the only male to ever be taught). The two worked together for some time hunting down Daemonites before meeting and joining the WildCATs. Grifter was slowly losing his powers during that period, and they ultimately went dead.

Cole left the team when they decided to aid a Daemonite who had captured and tortured Cole and murdered his friend, Lonely.

Cole operated alone once more for a long while but later returned to the WildCATs after the original team made its return. He also participated to a FBI sting operation leading to the conviction of his stepfather for the murder of Jacob Cash.

Blond, handsome, athletic built, generally ill-shaved in a glamorous way. The Grifter seems to like khaki-coloured trenchcoats and dark biker/combat boots, but that may vary. His most constant accessory is his red mask, originally made from a piece of an USSR flag after Slayton ignominiously executed a Soviet VIP.

This mask also bears his old “Deadeye” (his former alias) symbol from his Team 7 days, and look a bit like Deadpool’s.

However, he’s still willing to go for grifts and mount somewhat complex subterfuges. He’s not just a pair of guns anymore, at least when Steven Seagle writes him, but a skillful operator.

As can be seen, Grifter is currently a normal human. However at one point the had very potent psi  powers. These were not much shown at their height, but it has been demonstrated that by pooling their energies, the Team Seven members had enough mojo to erect a force field that could take a tac nuke and leave them unharmed.

In the last few years, his powers were but a shadow of what they used to be, but were better quantified. They included :

It is uncertain if he still has the Slowed Aging Advantage, but since it has not been proved he has lost it… 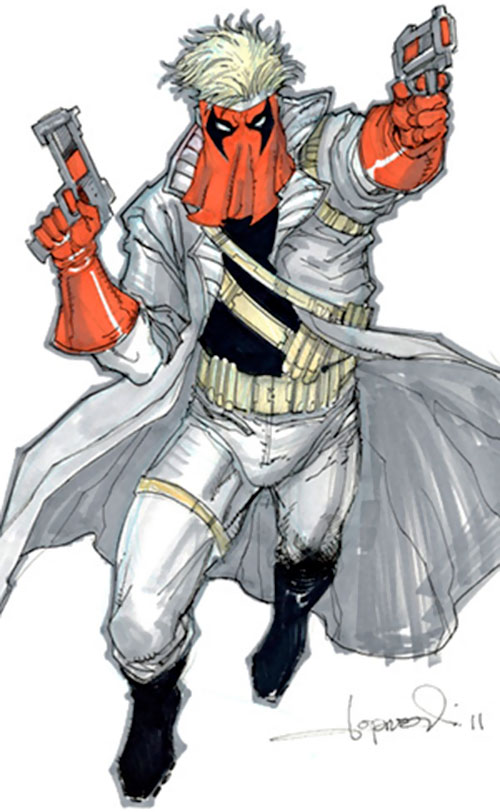 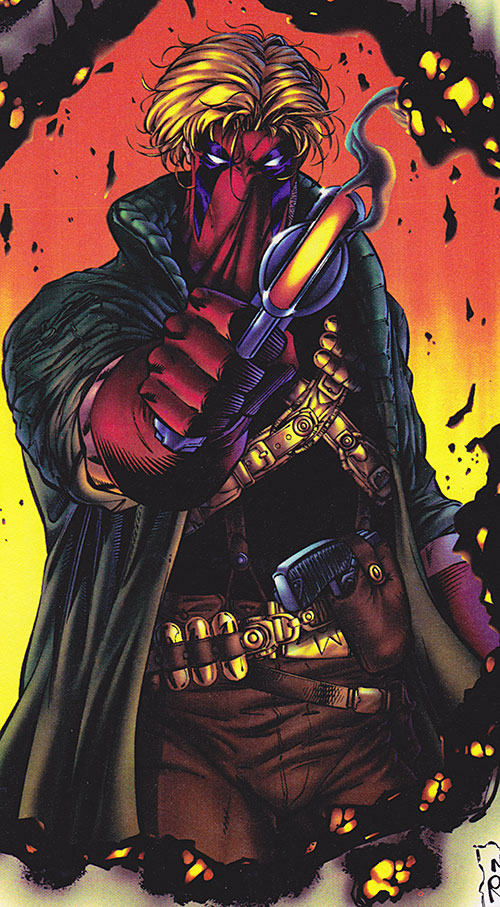 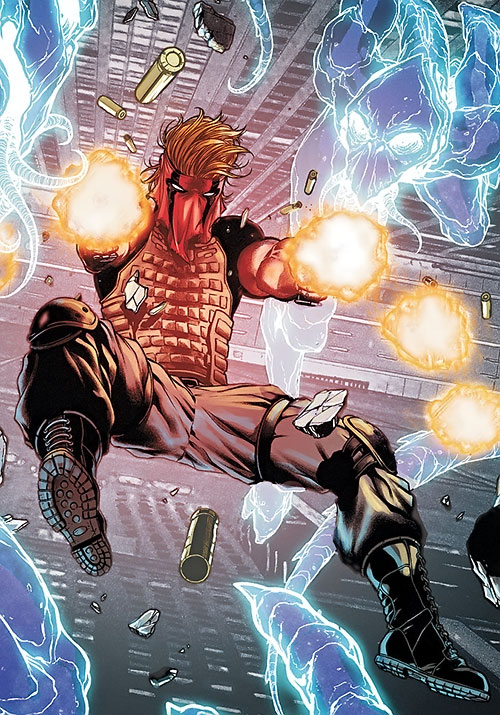