These are older notes, so they don’t quite use the more modern format. And they precede by years the 2010 Atlas/Seaboard revival attempt.

Matthew Dunsinane was a firearms dealer back in colonial America, 1743. But business became poor. So in order to maintain his extravagant lifestyle – and for the sheer thrill involved – he adopted the dual identity of the Grim Ghost, and became a highwayman.

The Grim Ghost’s reign of terror resulted in 67 waylaid carriages and 18 men shot to death. Despite his fearsome reputation, the Ghost always carried out his robberies with style and panache. His romantic, chivalrous manner caused the Grim Ghost’s lady victims not to mind the loss of their valuables so much. And he was always one step ahead of the authorities.

During one of his robberies, the Grim Ghost engaged in his typical flirtatious banter with the beautiful Lady Sarah Braddock. Her offer to rendezvous proved too much of a temptation for Dunsinane to resist. During a party at Lord Braddock’s mansion, Dunsinane introduced himself to Lady Braddock.

His natural charm proved just as effective in his civilian guise, and Lady Braddock’s own charms proved just as irresistible as before. This led Dunsinane to confront the Lady later that evening in her boudoir, as the Grim Ghost.

Little did Dunsinane realize, the Lady had laid a trap for him. Upon his entry, he was seized by armed guards, and Lord Braddock unmasked him. Dunsinane was tried for his crimes as the Grim Ghost, and he was sentenced to be hanged.

His last words before the rope pulled taut around his neck, summed up Dunsinane’s vanity and arrogance – “Don’t waste your breath yelling at me, my good men ! Use it to comfort your pretty wives who will be love-starved without me ! HaHAHaa !!”.

Hope you guess my name

Dunsinane’s death proved to be only the beginning of his journey. He arrived in Hell, to be confronted by Satan himself.

Admitting he liked Dunsinane’s “style”, the devil made an offer. Go back to the world of the living, and keep Hell supplied with evil souls, or suffer the tortures of perdition for eternity. Dunsinane, who readily accepted Satan’s offer. What the devil failed to tell him was that he would be sent back some 230 years after his death, to the 20th century.

The Grim Ghost appeared outside Dunsinane Manor. It was worn and weathered, but still standing vacant, its valuable properties inside remaining untouched over the years. Checking the stable behind the house, he found Satan’s gift – a flying black steed, to aid him in his mission. Dunsinane recovered the deed to his property, and passed himself off as an ancestor of its original owner.

He set himself up as a wealthy socialite, but refused to outfit his home with any modern conveniences, such as electricity. This trait made him something of a curiosity to his wealthy neighbors. At night, he prowled the city streets, looking for criminals to dispatch to Hell as the Grim Ghost.

During a party thrown at his manor, Dunsinane made the acquaintance of miss Jaqueline Marten, daughter of the local police commissioner. His charm undiminished over the centuries, miss Marten became his primary romantic interest before the night was over.

The Grim Ghost finally earned the attention of a demon called Brimstone, who was attempting to usurp Satan’s rule of Hell.

After being defeated by Brimstone, Dunsinane was contacted by his master, who ordered him to battle the ambitious demon again. In order to give him extra incentive, Satan made the point that if he ceased to exist, so would Dunsinane. To do the job more effectively, the devil increased Dunsinane’s powers, and saddled him with a companion – a resurrected Lady Sarah Braddock !

Despite his hatred of Braddock, the Ghost had no choice but to go along with Satan’s wishes. Back on Earth, Lady Braddock assumed the identity of Dunsinane’s sister. With her help, and the help of Jaqueline Marten, the Dunsinane defeated Brimstone.

The Grim Ghost undoubtedly continues to harvest evil souls for his hellish master to this day.

Back in 1743, Matthew Dunsinane was a vain, mercenary, arrogant (albeit attractive and stylish) ass.

He hasn’t changed that much since being resurrected in the 20th Century. He still clings to the mannerisms and dress of his original era, and is viewed as something of an eccentric by his high-society contemporaries.

He is a hit with the ladies, however. His dark good looks and natural charm seem to hold them in thrall. Kind of like James Bond in ruffles and a ponytail.

Dunsinane sees his job as Satan’s minion an easy choice compared to an eternity in hell, and willingly follows his masters’ orders.

To date, he has not revealed anything remotely resembling a conscience. He looks out for his best interests first, and his foremost concern is continued existence – the better to enjoy all the pleasures life has to offer.

As the Grim Ghost, Dunsinane wears a black vest over a white ruffled shirt, dark blue pants, black riding gloves and boots. A lavender cloth, pulled across his face and tied at the base of his neck, serves as his mask. A long purple cloak completes the ensemble. 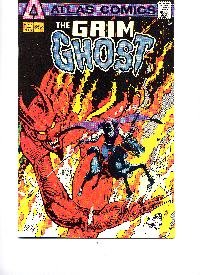 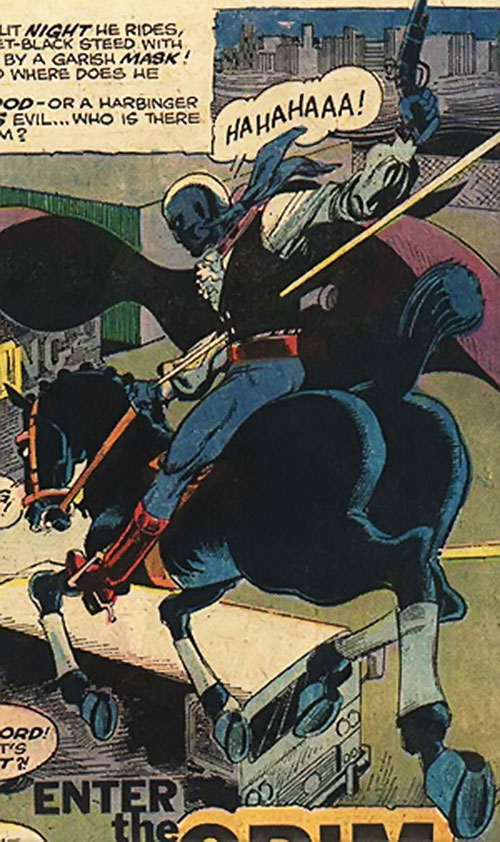