Grimbor’s greatest talent is his ability to imagine, design, and construct restraints. He can build some for any sort of person or creature, no matter what sort of powers or strengths have to be taken into consideration. His expertise also covers locks and safes, and he can either create them or break into all of them.

He is also a powerful fighter with some athletic training. He has a superhuman degree of strength and endurance. All told, he’s capable of defeating Colossal Boy or Timber Wolf physically. The source of those abilities is not known. Curiously, he’s physically stronger than most of his inventions.

His skill with his weapons is incredible, and he’s capable of subduing groups of foes at once.

Originally an apprentice locksmith, Grimbor quickly exploited his talent for forging chains and creating locks and restraints. He thus made himself the most sought-after chains maker in the galaxy. Although he had some above-board dealings with the United Planets, the majority of his work was for private agencies, often for questionable purposes.

Some of his earliest and greatest works was to create restraints capable of holding the Inter-galactic menace known as Golgo and Validus of the Fatal Five. Such feats gave him a reputation as the Galaxy’s greatest restraint specialist.

Grimbor was not interested in why his clients wished to have particular restraints made. His interest lay only in creating them and mastering the puzzles they presented.

Pleased to meet you

One such challenge brought him to the boarding school for orphans where Charma was being held. Her headmistress wished to bind the girl, whose mutant power made women hate her. Since it also made men love her, Grimbor freed her. She held absolute sway over him.

Despite selling his costly inventions, Grimbor was usually without money. He used all his profits to buy new equipment. Thus, Grimbor and Charma turned to crime. They came into conflict with the Legion of Super-heroes when they attempted to extort money from R.J.Brande. The two were captured, and Charma was killed while in a women’s prison.

Insane with grief, Grimbor vowed to get revenge on the Legion and, later, Earth. In his first revenge scheme he captured Earth’s President, Superboy, Colossal Boy, Phantom Girl, Cosmic Boy and Sun Boy. However, when he was defeated it was revealed that Grimbor had only been an extremely life-like robotic copy.

Grimbor has fought the Legion several times since. In one case he put energy chains around the Earth in order to destroy the planet if his demands weren’t met. These included the opportunity to execute the Legion.

Grimbor is currently in stasis on Labyrinth, the prison planet. He’s held by equipment constructed partially from his own designs. Meanwhile, Grimbor’s restraints have become popular collector’s items. His original pieces are carefully tracked and procured despite efforts by the Science Police to curb resales.

Very recently, Grimbor the Chainsman traveled to Quarantine. He wanted to retrieve his daughter, Cocheta, from the clinic. Kent Shakespeare, along with Celeste and other super-powered patients, most notably kids, arrested the villain.

Grimbor is an impressively muscular man in black spandex with bare arms, legs and chest. His lower arms are covered with black leather bands, and he wears steel chains around his shoulders and waist. He’s also gives a veteran impression since he has black boots, thick brown eyebrows and brown hairs with graying at the temples.

In later years, he started wearing high-tech combat armor, onto which were attached all of his newest, greatest restraining devices with easy access.

Grimbor is a serious and sometimes grim man. He is a firm believer in occupational pride, and cares a deal about his reputation as a greatly accomplished restraint specialist.

For example, he once decided to keep the captured Legionnaires as trophies. That was even though he could have gotten a ransom of one billion dollars for them. The incident provides a clear sign that he loved his own more work than Charma. That said, once he has himself decided for something, he goes after it with fierce determination, energy and courage.

It is pimpressive to just walk into Legion headquarters or Quarantine, to be prepared for any opponent, defeat them, and then calmly continue with the task at hand. Still, he was somewhat opposed to killing. Grimbor would only attempt to do so if the stakes were too high or if the goal was pure revenge.

He would probably not hesitate to kill Legionnaires when he gets the change. He truly hates them all, particularly after the death of Charma. Grimbor wants to see them all dead at *any* cost.

He enjoys facing great challenges, and therefore spends a lot of his time creating various restraints for “impossible” superhuman opponents. Sometimes he also hunts down the targets and puts on the restraints himself. This might be seen as the culmination of that project and challenge.

He is also very intelligent, and plans well in advance. Grimbor often has a backup plan or surprise continuation of attack for his foes.

Although not originally a villain, and had no need for extra money, he was led into villainous acts by Charma. Later on, he chose to continue his criminal activities by himself, although the motif was never money. He wanted revenge and similar, or just to liberate his daughter (whose mother was probably Charma). Now it is too late for him to become a lawful citizen again.

He was deeply in love with Charma. However, the reason for that may or may not have been her hypnotic powers. He always reacted extremely strongly and physically to any threat to Charma. Whatever the case, his daughter Cocheta seems to be almost equally important now.

“Behold my three-dimensional display ! I have sold my services to criminals and kings ! I have captured their enemies… monsters, such as the mighty Validus… and built impenetrable fortresses and vaults for treasury… and they have paid very well !”

(Grimbor holds the Legion captives) “No, I won’t sell ! This is my greatest achievement… my greatest piece of work ! I’ll keep them as trophies !”

“She will not awake for a while, and then this absorbing spiral band will neutralize her power !”

Grimbor has also employed remote-controlled, robotic copies of himself. For game-play purposes their stats are identical to Grimbor’s own stats. Thus, when Grimbor is defeated, it is possible that only a robot copy was defeated!

Such robots, once destroyed are often booby-trapped to self-terminate explosively (Bomb: 20, Limitation : radius is 04 APs only, R#3). If the GM wishes to employ this elusive, but lethal version of the character, it is advised to give him the Schtick (Contingency Plan) Advantage.

The day the Earth stood chained

Another time, Grimbor built chains that surrounded the Earth, threatening to destroy it as he was threatening the Government. In fact, the chains were an illusion. The Earth was actually sheathed in a constricting force field that prevented any traveling to and from Earth’s orbit.

In game terms, the Earth chains had a high AP level of the Force Field Power, and a connection to a power source with a BODY score on some hidden location. Also, Grimbor probably had the means to destroy the planet as well. Say, a doomsday bomb with really high APs of Bomb, possibly 75 APs, to detonate it, by remote, inside the force fields.

Bonuses and Limitations:
SL:Gadgetry is Always On, since these are robots made of common metals.

The stats above depict Grimbor during his prime days as a major Legion menace. When he last showed up, on Quarantine, after the so-called “Five Years Gap”, he was still impressive. But he no longer was a supervillain capable of bringing down several Legionnaires at once.

The Quarantine Grimbor has a total of 50 HP available, as well as a reduced Weaponry Skill of 12 APs only.

However, this later Grimbor had mellowed to the point that he no longer possessed his Hatred and Traumatic Flashbacks Drawbacks.

Helper(s): Christopher Cottingham, Who’s Who in the Legion of Super-heroes #2of7, Jun88, some editing by Sébastien Andrivet. 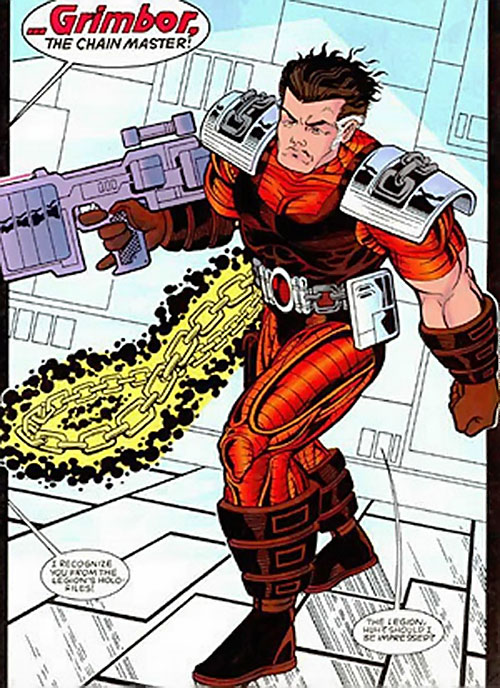