His most remarkable quality is that he can endow any point of his body with extraordinary adhesive properties. As an example, after the Thing decked him in the sternum, he found it impossible to pull his fist away since it was stuck against Gronk’s adhesive skin. It took Hercules’ strength to overcome Gronk’s adhesive power.

Gronk frequently uses his power of adhesion and great strength to climb surfaces, making him surprisingly mobile. He can also sleep while upright, as long as there’s a wall nearby for him to stick to and not fall down. Gronk stops sticking when he’s knocked out, so presumably he has to concentrate in a special way to remain sticky as he sleeps.

Gronk seems to have a rather solid resistance to mental attacks, though nothing superhuman. He’s determined and hard to scare, perhaps because he’s used to dying.

Gronk is assumed to be either a Deviant or an Inhuman. He has been serving, along with Helio and Phobius, as the small cadre of enforcers and agents known as Mælstrom’s Minions. They’ve been around since at least 1981.

During Mælstrom’s next big plan (to absorb the power of Earth’s rotation within himself, likely destroying the planet in so doing), the Minions were of course at his side.

But the crisis drew in a whole roster of Avengers from both coasts, and the Minions were completely outmatched. Gronk discovered that Hercules, unlike the Thing, possessed enough power to free his fist from Gronk’s power of adhesion.

Gronk was later present as security during Maelstrom’s big plot to take the Quantum Bands away from Quasar in the name of Oblivion. He did not play much of a role, though. When he intervened he was again met with overwhelming force, with Sersi immediately turning the Minions into animals (Gronk became a pig).

The Minions and another set of servants of Maelstrom, the Weird Sisters, later executed on instructions left by Maelstrom to bring him back and imbue him with great power. They did so by draining the life force of a select set of Deviants, Eternals and Deviant-Eternal hybrids.

The Minions and Sisters were successful, though Maelstrom’s bid for power was eventually foiled by the Fantastic Four and a number of Eternals.

Officially, Gronk is 6’. But he’s usually drawn as being way taller than that, almost two heads taller than the Thing during their first clash. The Background block and stats block reflect that.

Dour and effective. Gronk doesn’t speak much. When he does the grammar is sloppy and the style unimpressive, at least when he speaks English. He’s a decent team player and will aim toward neutralising the melee fighters.

He tends to call people smaller than he is “little man”.

“It is the little man who falls, not Gronk !”

Advantages:
Iron Nerves (except vs. Maelstorm).

Equipment:
Can be equipped with Gadgets provided by Maelstrom, including image inducers to disguise his Distinct Appearance.

Glue Being does pretty much what it sounds. Anybody touching Gronk will be attacked by a Glue power, preventing them from moving the striking surface away from Gronk and diminishing DEX. As with all ’Being‘ Powers, refer to Flame Being for pointers on how it works.

The GM may adjust the DEX penalty as needed depending on the action, as always with Glue. Frex, after sticking his fist against Gronk, the undaunted Ben Grimm soon decided to go for a bear hug, which suffered from little or no penalty given the situation.

It is possible to tear oneself from Gronk without beating his APs of Glue… by losing all the skin that’s touching Gronk. Damage varies depending on the amount of skin, and the nature of the epidermis. Somebody with a thick, layered hide with few nerve endings, like Karkas, might take as little as one automatic, non LDD-able RAP. 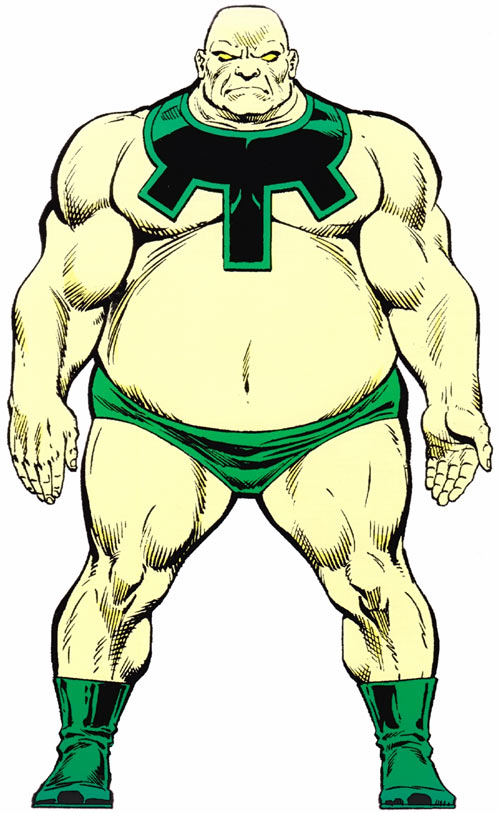 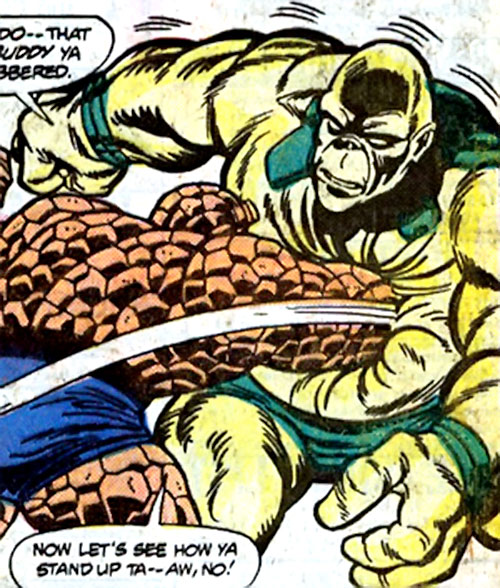 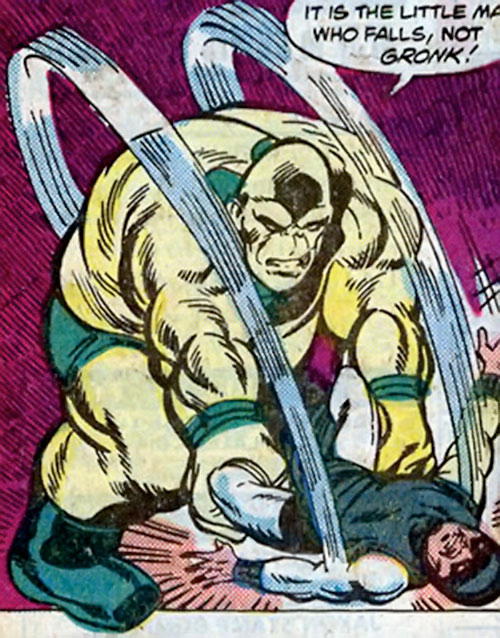 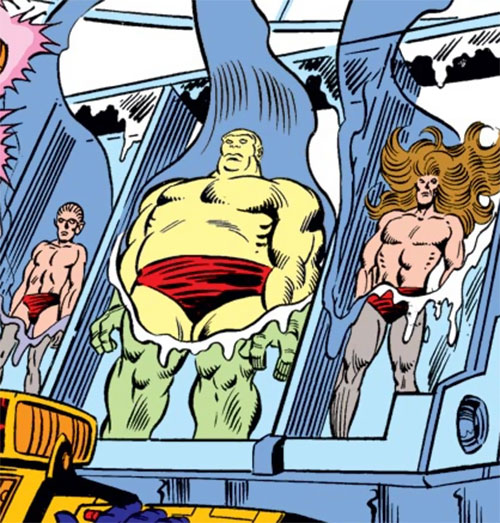