Grunge is a Gen-Active 2nd generation, which means that he is a child of a member of the Team 7. These were the first persons exposed to the Gen-Factor.

His power allows him to absorb the material of anything he touches and turn his body into that material. He can also fuse with the material, clinging or being part of it. For instance he can touch a light post and be the light post.

While absorbing a material, Grunge is nearly impervious to physical damage. However, he can be neutralized by using properties of the material he’s absorbing. For instance, heat while he’s sand turns him into glass and thus freezes him.

He is also brown belt in an impressive list of martial arts (Kung Fu, Aikido…).

He has a photographic memory enabling him to recite a handbook of bio-chemistry after browsing it for a few minutes.

As a baby, Percival Chang was sent from his native to Hong Kong to Seattle. His father was trying to keep him out of I.O.’s hands. But it didn’t work, and the boy ended up a prisoner a Project: Genesis. 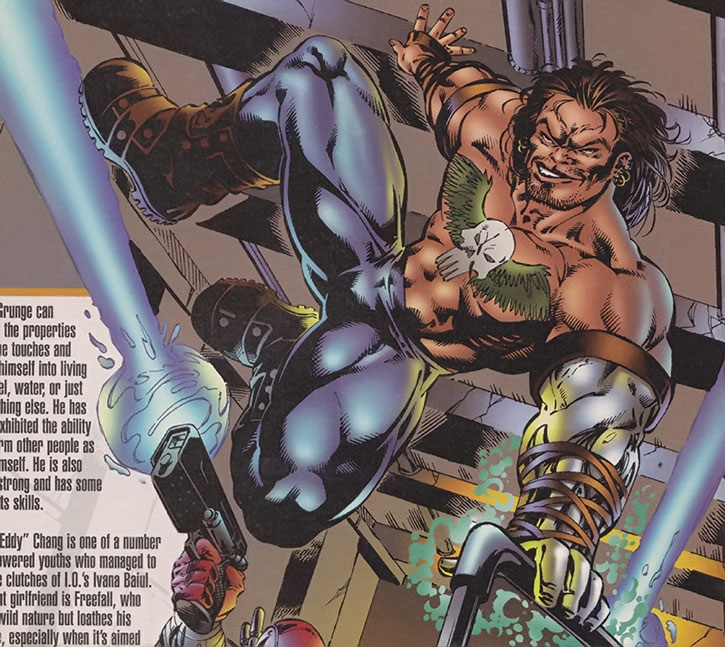 He was among those Gen13 subjects who escaped. Grunge was the last to manifest his powers, but did so at the perfect moment to save the day.

While living at Lynch’s safehouse in La Jolla, California, he enjoyed the view. After all, he was living with three gorgeous girls, while he was, in his own opinion, the only stud around. So he made his move on the three of them.

It did not went exactly as well as he expected. One of the lasses, Roxanne, actually had a crush on him. But he was too dense to notice. He kept getting shooed away byt the other two girls until Bobby pointed Roxy’s feelings out.

When Lynch paid for their San Diego University  tuition, Grunge showed amazing mental faculties. These were far above what could be expected from such a super dense mind. Apparently, acting like a knuckle dragger is meant to hide his smarts so his enemies will underestimate him. Let me say : it worked 100%.

His attraction toward beautiful women has led him into traps more often than reasonable. Like when he fell for the Coda of Isle du Mystère and their supposed breeding sessions. Instead, he was bound to become an human sacrifice and was just used as reproductive stud in the meantime, which mostly earned him an STD .

His attraction to comics made him sell his soul for a “special alternate cover chromium edition”. His bad taste also dragged Bobby in all kinds of losers’ cruises, one of the worse being breaking Lynch’s curfew to go alone, and powerless, after Elijah Sterling (former Team 7 and future IO’s Puritans director).

Grunge is a squat, hairy teenager. He has a huge tattoo on his chest – a skull with a pair of feathered wings. On his back is tattooed a big Yin / Yang Chinese pattern.

In a fight, he wear brown spandex pants with combat boots and leather bands wrapped around his arms. Otherwise, he wears torn old looking clothes as his namesake suggests.

Grunge is a right knobhead. Or at least, that’s the image he gives. He’s obsessed by sex, and does most of his thinking with his groin. He believes he’s irresistible to women, despite the reams of proof to the contrary.

He just loves comics and Hong-Kong movies. Indeed, most of his attitude comes from those flicks.

(About a tatoo on Roxy’s lower back) “Waaaay fooiiinnne ! It makes your butt look so much smarter.”

Molecular Chameleon (Self Link) gives the character the usual benefits, plus becoming part of the thing he’s touching, like a fusion with the material. Using the power this way provides the same benefits related to Body condition, but also makes the character hard to distinguish from the source material.

Spotting the Character requires a Perception Check with an OV/RV equal to the AP of power, as long as they’re not moving. 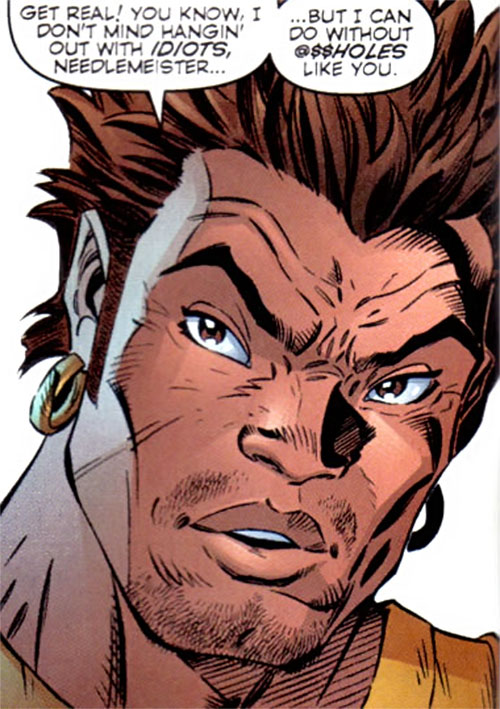