Gryfs were the most fearsome predators of Pal-u-don, a lost land in Africa. They were relentless trackers, never giving up on their prey. Gryfs somehow always managed to keep on the trail despite all attempts to shake them. Even Tarzan couldn’t escape them.

Another curious characteristic of gryfs is that they cannot be detected by a sense of smell. They have no scent.

Gryfs are worshiped by the inhabitants of Pal-u-don to some extent. There is a Temple of the Gryf in the Ho-don city of Alur. In a lost world where missile weapons are nearly unknown, such a monstrous beast is supreme.

With one exception : the dreaded man-beasts called the tor-o-dons have the uncanny ability to control these monsters. By screaming a command that sounds like “Wheeooo” and using a staff to beat on their fearsome heads, the tor-o-dons change the giant killer into a submissive mount.

It is unknown how the gryfs came to be subject to the tor-o-dons, a secret lost in antiquity. But this control is absolute. Gryfs are “steered” by hitting their head with a stick, the overall technique resembling popular conceptions of elephant-riding. 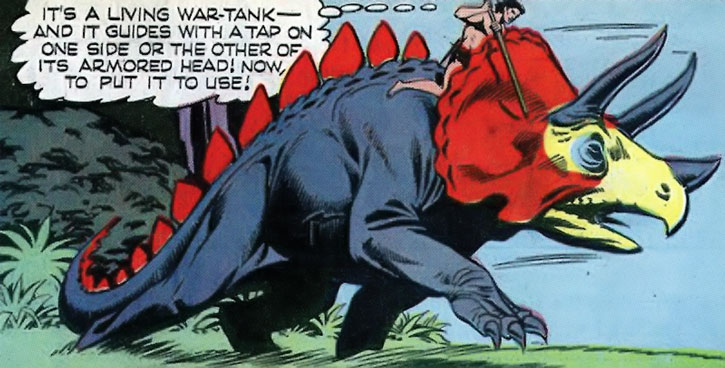 Tarzan learned to control the mighty gryf by watching the tor-o-dons and reproducing their cry and behavior. This relied on his own wonderful ability to mimic any animal sound he hears. This ability added greatly to the reputation that caused him to be known as Tarzan-jad-guru. Tarzan the Terrible.

Much larger than the typical triceratops. 20 feet at the shoulder, 75 feet in length. Slate-blue in color with the exception of its yellow face, blue bands circling its eyes and a red hood with yellow lining. Its belly was also yellow. Three parallel lines of bony protuberances down its back.

Three horns, two large ones above the eyes and one medium horn below. Its toes were talons as befitting a predator.

This dinosaur was enormous. If it reared up on its hind legs it might reach 50 feet in the air, despite being a tank-like four legged creature. Its roar was capable of terrifying most creatures and men.

Source of Character: Tarzan the Terrible. 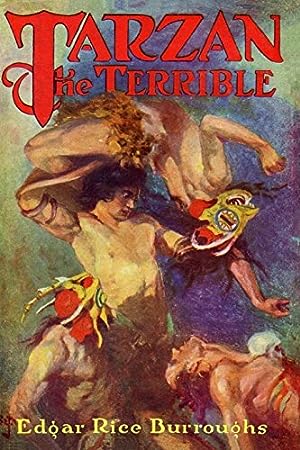 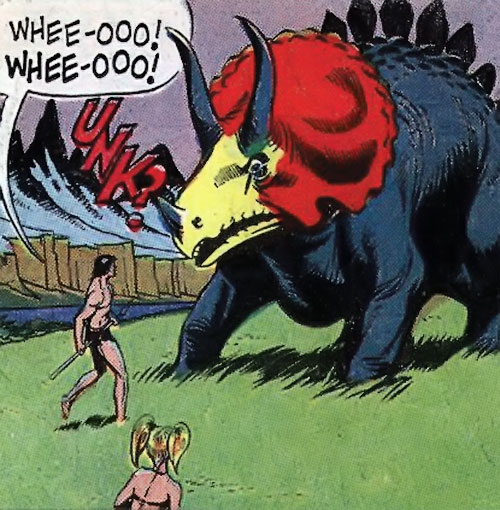 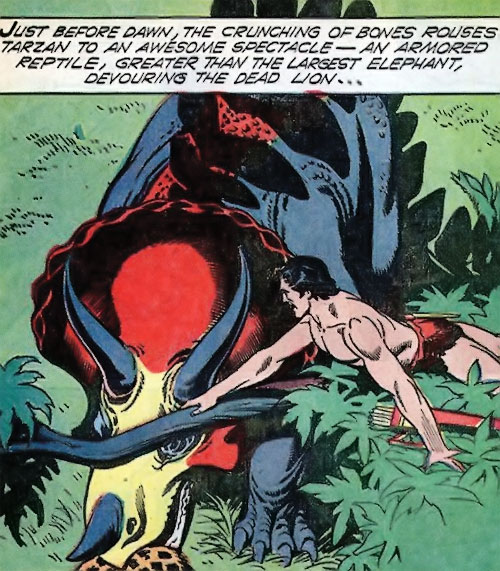