He appeared in “A Glutton For Gold”, which was in Devil Dinosaur #2, among other places.

Much of the gold in enchanted Asgard has been disappearing. We see Gudrun the Golden standing alongside his takings, “Truly I am Gudrun the Golden! I will gather unto myself all that is gold so it may reflect back mine glory.” (sheesh!). Thor and Sif ponder Asgard’s missing gold, and Thor declares, “This evil plot calls for brains instead of brawn”.

Up a creek without a paddle, Thor nevertheless comes up with the idea of gathering all the Hostess™ Twinkies snack cakes in Asgard, and leaving them as irresistible bait for the gold-napper. Gudrun takes the bait, exclaiming, “I come for golden bars of metal and find golden bars of rich, moist cake. This is indeed a treasure.”.

Thor and Sif nab Gudrun. Just before he is dragged away by what looks to be the equivalent of the Asgardian police, the knave admits he likes the Twinkies better than real gold.

Sif offers up these final words of wisdom, “Truly tis better to enjoy the golden goodness of Hostess Twinkies snack cakes than store up gold that does naught but gather dust.” The lady’s got a point.

Gudrun is a big, burly guy, with a golden beard and mustache. He wears a suit of golden armor and a gold cape. His helmet has two big gold forks sticking out of it (similar to Galactus’s headgear), and a shining, sun-like emblem adorns his armor’s chestplate. 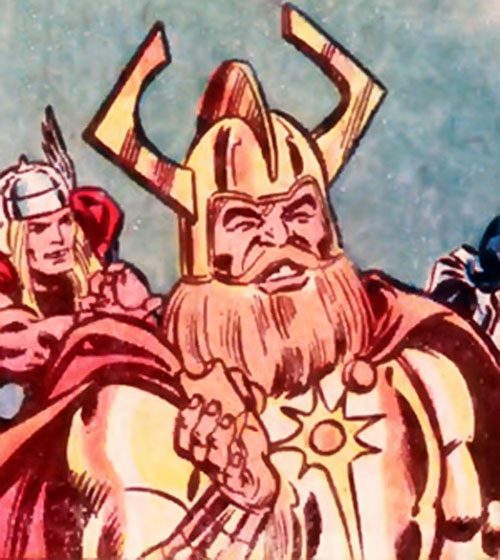