A slightly goofy gunwoman and sidekick to an assassin. She appeared in 1994.

Later on she matured into a capable killer and changed her handle to Pistolera – which is covered in her second profile.

During her initial appearances as Gunbunny, she was just a sidekick for Gunhawk. She was his spotter and getaway driver. Though later books stated that she always was a dead shot and gunfighting expert, it really wasn’t evident in her witnessed performance.

I would assume, to reconcile accounts, that she was a superb markswoman at the range but lacked combat conditioning and experience, making her severely under-perform when under fire.

Presumably, additional experience and training allowed her to overcome her nervousness and to employ her full accuracy and reflexes in actual combat. See her later stats as Pistolera in the second writeup.

Gunbunny was first spotted in the mid-1990s, as Gunhawk’s girlfriend. She was obviously a fellow gun geek, but did not seem to have military experience. Still, she had the training to be Gunhawk’s spotter.

Bunny provided spotting and getway driver services for Gunhawk’s mercenary assassination contracts. Her rap sheet lists her as having aided and abetted with over 50 hits.

When the couple learned about a one-of-a-kind prototype supergun being showcased at a Gotham guns show, Gunhawk decided that they absolutely had to have it. They just barged in the show in broad daylight and grabbed the gun, which of course degenerated into a gunfight with the convention-goers.

Gunhawk dispersed the crowd with the super-gun, but the overwhelmed Gunbunny was shot by somebody in the crowd.

With Bunny knocked out and bleeding, Gunhawk carried her to a nearby ER, forcing the doctors to operate at gunpoint. A brutal battle with Batman (Jean-Paul Valley) and a GCPD tac team ensued, and he was arrested. Meanwhile, the doctors managed to get the bullet out of Bunny and stabilise her.

The GCPD determined that Gunhawk was the triggerman in a recent assassination in Gotham, but some months later the couple was free.

Gunhawk and Gunbunny resumed their work as assassins for hire, but Gunhawk hit a slump, perhaps because he was drinking too much beer. After several failed and/or sloppy hits, Bunny grew disenchanted with him and dumped him.

This romantic misadventure had a devastating impact on Gunhawk. He became unreasonable in his attempts at proving that he still had his sniper’s eye, obsessively taking difficult and risky contracts in an attempt to win Bunny back.

Gunbunny, on the other hand, went on to bigger and more lucrative things.

While she works as Gunbunny, she wears a fitted replica of Gunhawk’s uniform, including the signature visor.

Originally, Bunny is a cross between a typical bimbo and a typical guns geek, which can be a bit surprising. She’s big on girly romantic stuff, sleazy tabloids and expensive vacations — and on rechambering her rifles or trying out new machine pistols at the range.

Unlike her big brash jarhead, she feels nervous in gunfights and other dangerous situations. She would rather be out of here ASAP.

“I think it’s that Batman I read about in the Midnight Inquisitor !” 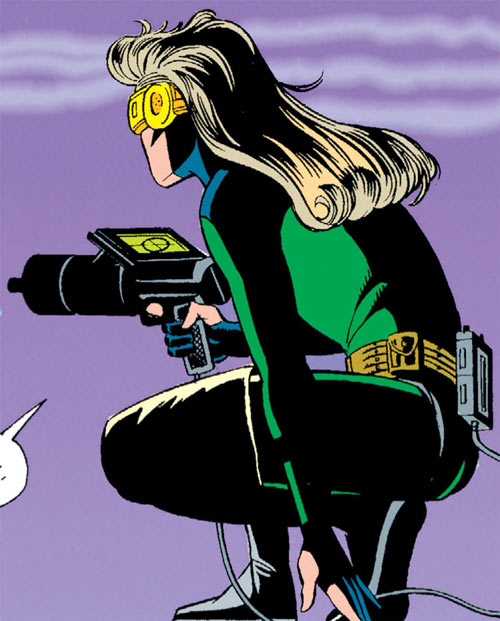