“All marines are crazy but Gung-Ho is the hairiest, scariest, craziest jarhead that ever scratched, kicked and bit his way out of that hole-in-the-swamp they call Parris Island !”

G.I. Joe: A Real American Hero was a comic book and cartoon series based off of Hasbro’s 1980’s military action figure toyline.

While both series covered the same characters and concepts, they had vastly different continuities. The cartoon’s stories were far more fantastical (and often silly). Whereas the comic was far more realistic and gritty.

G.I. Joe’s story focused on the ongoing struggle between the G.I. Joe Team (a group made up of soldiers hand-picked from the four main branches of the U.S. Armed Forces) and the sinister Cobra organization (who were dedicated to world conquest).

Our write-ups specifically cover the first 56 issues of the 1982-1994 Marvel comics series which took place in its own universe. They thus exclude any events found in any other comics (IDW, Image, etc.) or television/movie series.

Gung-Ho is one of the most recognizable Joes. He’s multi-generational, having appeared in virtually all of the different series and having a staggering 21 different action figure depictions as of this writing.

He is proficient with most infantry weapons and a talented knife fighter.

Even for a marine, Gung-ho’s strength is remarkable. He once wrenched a car door off of its frame. He also could hammer wooden beams into place with his bare hands.

When deployed, Gung-Ho usually wields a XM-76  Grenade Launcher, some fragmentation grenades and a combat knife.

(“Gung ho” is 1930s+ US Marines jargon for “exceedingly enthusiastic/energetic”. It is vaguely derived from a Chinese slogan — ed.). 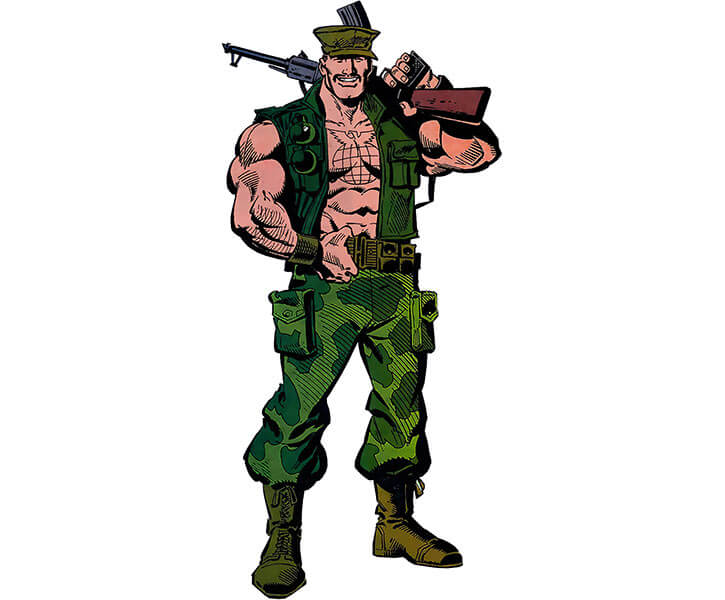 Gung-Ho was born into a large Cajun  clan on the bayou in Fer-de-Lance, Louisiana sometime in the 1960s.

When he turned 16, he decided to seek his fortune in New Orleans. He made a living by participating in underground fighting arenas. In short order, he earned a reputation as an accomplished brawler and knife fighter.

When he turned 18, he enlisted in the Marine Corps. He attended boot camp at Parris Island. From there, he then went on to Recondo, Airborne and Marine Heavy Ordnance school. He graduated at the top of his class in each.

Gung-Ho’s skill, strength and sheer craziness distinguished him from his peers. These qualities eventually brought him to the attention of the G.I. Joe strikeforce.

It took place in Alaska, where Cobra was trying to poison the Alaskan Pipeline. While defending the pipeline, Gung-ho charged a trio of armed Cobra Vipers, bare-chested in -5°C (23 °F) weather. He defeated them… unarmed.

After the battle of Cobra Island, Gung-Ho helped stop Zartan from escaping the Pit. He shrewdly determined that Zartan had disguised himself as Duke. He then fought him to a standstill until help could arrive. 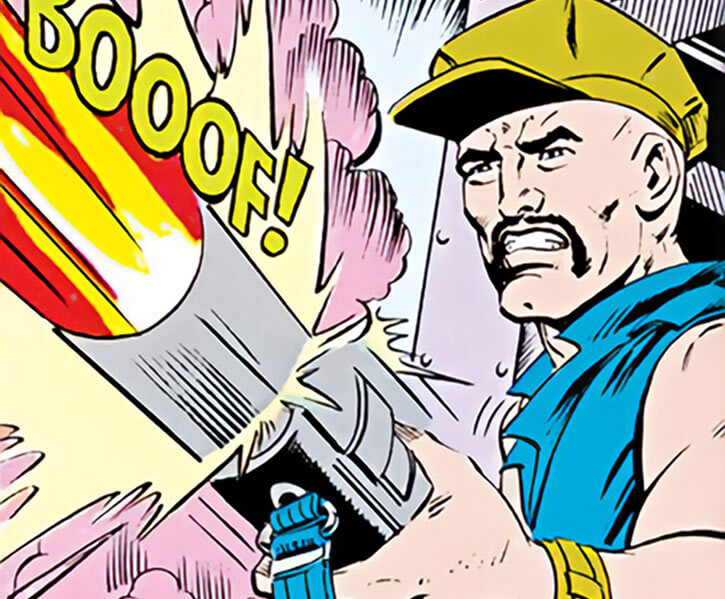 Gung-Ho is a large musclebound White male. When he has hair (he often shaves his head), it is jet black.

He has a thin mustache and a large blue USMC symbol tattooed in the center of his thick chest.

Gung-Ho’s uniform consists of a pair of camouflage fatigues and a matching vest. He tops off his uniform with a pair of sturdy combat boots and a tall military cap.

In his earlier appearances, Gung-Ho spoke with a distinctive “cajun” accent. This was dropped as the series progressed.

Gung-Ho is impetuous and brave… often to the point of stupidity. He’ll do and risk anything to succeed in his mission.

Gung-Ho has a wicked temper. When he loses control, he’ll lash out at anything nearby. From people to car doors. He once totaled an expensive sports car because its model was a “Cobra.”

Finally, Gung-Ho is a proud Joe, and an even prouder marine. He holds the corps in the highest regard and isn’t afraid to let the entire world know it. 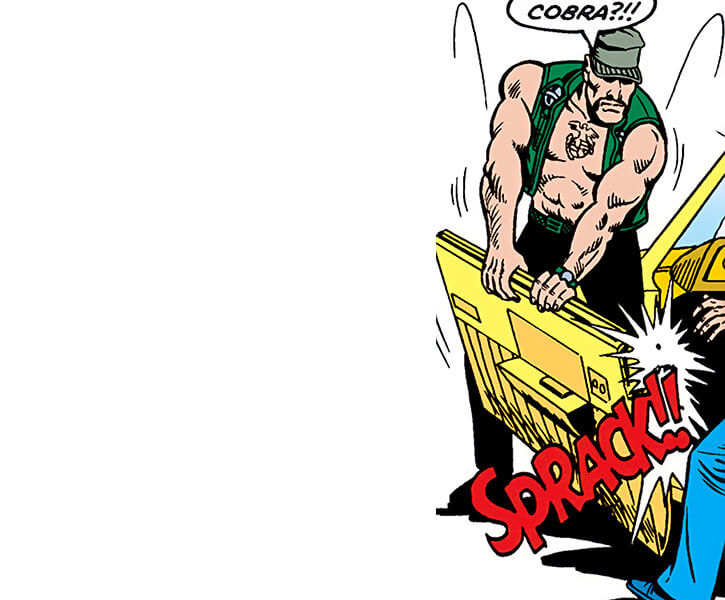 “Split up ? Not so good. I think better to take out station first, capture tank and then go after main body. No ? I think maybe that Snake-Eyes he agree with me, he nodding like hungry ’gator…”

(While pounding a brace into place with his bare hands)
Stalker: “You’re going to need a sledgehammer to –”
Gung-Ho: “Hammer ? I don’t need no stinkin’ hammer !” 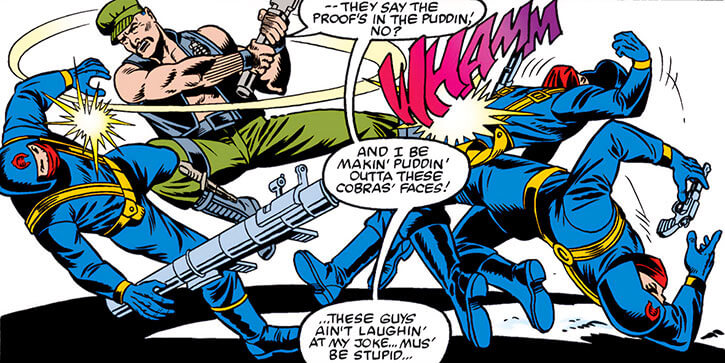 Writeup completed on the 9th of September, 2016.