Gunhawk has 20/10 vision, and is an extraordinary long-range sniper. When in top form, he has a 90%+ hit ratio on human targets a mile away. He has proven able to hit human targets half a mile away without a scope.

Having graduated at the top of his class at Marine Sniper School, he’s very experienced with the maths involved in sniper work. He’s an excellent commando and amphibious operator, and intensively trained with a very wide range of small arms.

Gunhawk is in top physical condition, and seems to have specifically trained for the niche of a costumed operator – his acrobatic ability is certainly not a part of his military training.

Gunnery Sergeant Liam Hawkleigh is a veteran of the USMC and the Force Recon units. He was one of the very best snipers in the Corps, and specifically trained with special purpose high-caliber weapons.

He was, however, a discipline problem – often making unauthorized kills, sometimes solely to prove his prowess to his comrades if challenged.

This led, among other things, to an ugly incident in Lebanon. He shot what he thought was a Hezbollah soldier from more than a mile away. The man wasn’t an hostile – he was a key informer that Special Forces officer Slade Wilson was bringing back to the US lines.

The snake-eater chewed the jarhead, and swore to have his head sooner or later.

Hawkleigh was eventually discharged from the Corps, and became a freelance assassin under the name and costume of Gunhawk. This soon became a duo with his girlfriend who, as Gunbunny, was his spotter and partner.

In Gotham, the pair made a successful hit against a businessman. Gunhawk then decided he absolutely had to get a one-of-a-kind machinegun prototype. They invaded a gun show to steal it, but the situation went out of control. 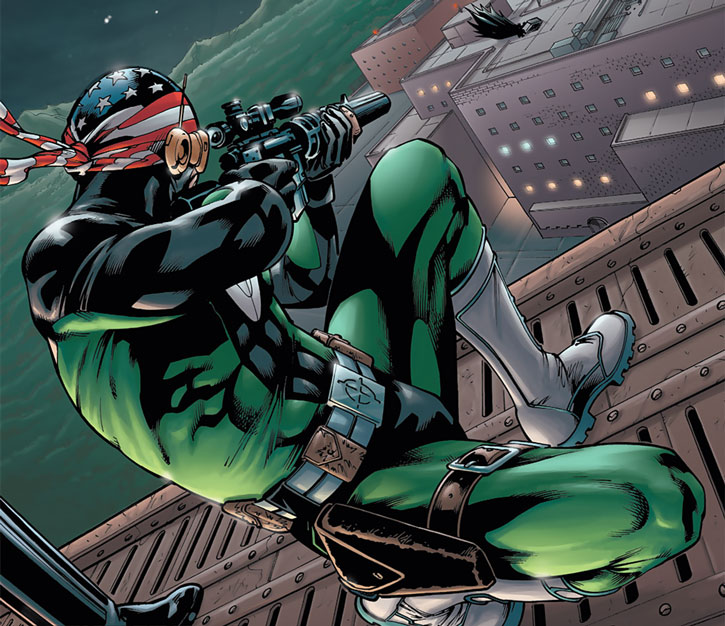 Batman (Jean-Paul Valley) intervened, and Gunbunny was wounded by gunfire from the patrons. Gunhawk rushed her to a hospital and had her operated on while keeping the docs at gunpoint.

Batman soon caught up with him, and eventually defeated him. It was during this encounter that Azbats started wearing an heavier body armour than his previous model, to ward off Gunhawk’s gunfire.

From that point on, Gunhawk started slipping down. His next 3 hits didn’t go very well – his accuracy was down, he was drinking too much beer and he was becoming slightly depressive. When he actually missed his next mark, Gunbunny dumped him.

From Splitsville to Blackgate

Gunhawk was devastated, and swore to get her back by demonstrating that he was still a top sniper. He took an extremely lucrative contract in Gotham.

However he failed again – his first target, Lucius Fox, escaped death. Part of the problem was that he and another sniper had opened fire at the exact same moment. Furthermore the other assassin, Slade Wilson, recognized him.

At this point Gunhawk was desperate to show Bunny that he still had the stones, and decided to hit his next target up close. He successfully assaulted the yacht where the target was, but Wilson was covering the boat with a scoped rifle from the shore, intending to kill him.

Batman (Bruce Wayne) managed to take down Wilson. The Caped Crusader was then forced to use Wilson’s rifle to shoot the guns out of Gunhawk’s hands before he could kill Sarah Essen-Gordon and her partner. Both cops then arrested Gunhawk, who went to Blackgate.

Gunhawk was next seen in the Karrocan Emirate, where he was part of the successful small strike force (along with Deadline, Hatchet and NKVDemon) which defeated the General’s forces.

In 1999, he was hired to hit the New York City mayoral campaign of Selina Kyle, a.k.a. Catwoman. Kyle spotted him at the last second in a reflection and dodged, though the bullet hit one of her campaign advisors. 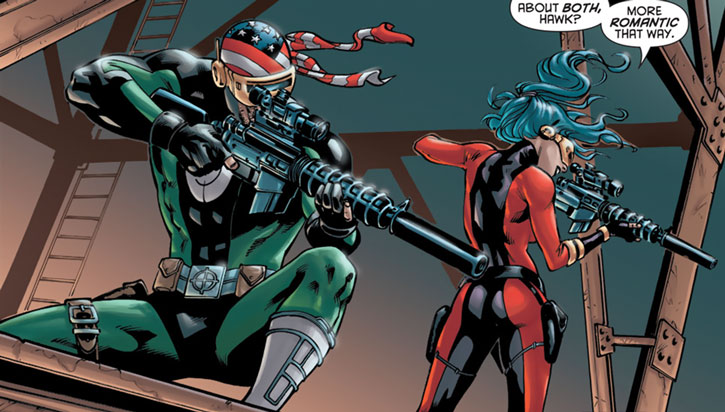 It was perhaps during the mid-2000s that Gunhawk recruited a new Gunbunny – also a sniper, and who seems to be his lover. Almost nothing is known about her. She wears the red costume once used by her predecessor, but has black hair.

In 2008, Gunhawk and the new Gunbunny were hired by one Mr. Jardine as extra security in French Guyana. The other 2 mercenaries were Militia and Camorouge.

As Jardine thought, Batman and a new team of Outsiders were coming to prevent the space launch he had bought and defeat his plans. While Gunhawk and Gunbunny were drawing beads on Batman, they were possessed by the spirits of Ralph and Sue Dibny.

The Dibnys took some time to make out, then opened fire on the European guards to force them to stay under cover. When the 2 spirits left, the snipers recovered their consciousness only to find themselves under copious fire for no perceptible reason. Gunhawk and Gunbunny were forced to retreat.

Hawkleigh is definitely a jarhead, and keeps his military cowboy-like demeanour from his days in the corps. He’s the boasting type, very proud of his skills.

He’s also a gun nut, with an impressive collection and an almost child-like desire to collect more and more interesting guns.

His relationship with Gun Bunny (now Pistolera, of the Ravens) was and still is extremely important to him. He’d do anything to impress her so she’ll come back to him.

He was very dejected and intense about it – almost suicidal at one point. He seems to have depressive tendencies – at least when he starts losing his edge, since he’s otherwise very confident and almost flamboyant.

Gunhawk is rather charismatic in a relaxed, professional star soldier sort of way. Like many jarheads, he can get very intense when fighting. He often calls people he doesn’t like “hoss” or “pogue”.

Interestingly, he didn’t seem willing to shoot down the tac team of the GCPD – he probably retains USMC loyalty, and will not open fire on men who might be former Marines.

Defensive Roll 2, plus various Advantages when aiming a precision firearm. 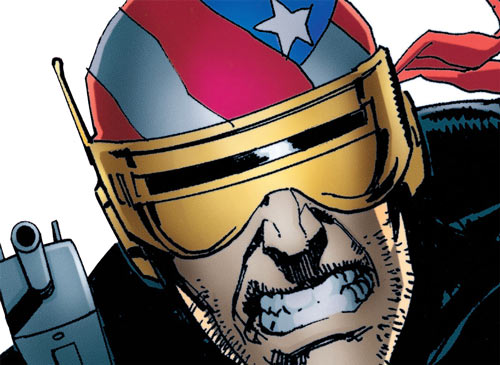 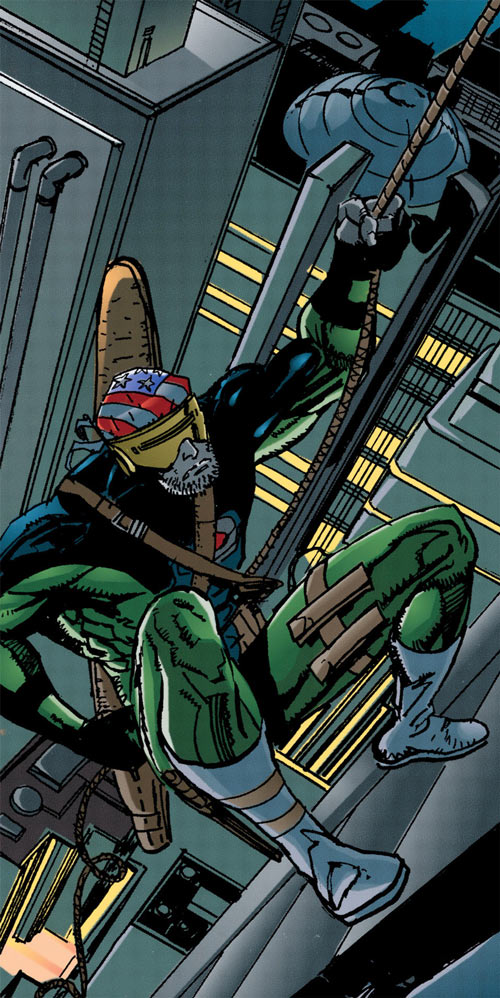