Gunmetal is a badass. He is reputed to be one of the best riders and shooters on the road today. He’s a professional mercenary and assassin and is a smart, driven man.

Gray is quite resourceful. For instance, when he saw firearms didn’t help much against the Ghost Rider, he immediately resolved to try a new approach. Gunmetal thus crashed thousands of litres of liquid nitrogen, which he quickly procured, on the Ghost Rider. The idea was to test whether he could “extinguish” his hellfire.

Likewise he quickly determined that the Rider’s weakness was his alter-ego, and how the Ghost Rider’s chain of vengeance worked.

Gunmetal regenerates, and seems very hard to put down for long. He was once dragged for miles behind a chopper at high speed. When the rider stopped, Gray simply got up and killed him.

Gunmetal is well known among the outlaws living along American highways. He is both as an admired badass and a ruthless, mercenary problems solver. In most truck stops and biker rallies people will pay for his food and beer. He’s famous enough in that subculture to have an ad hoc entourage.

In 2007, Gunmetal was drinking in the same bar as Johnny Blaze. Blaze had just begun turning into the Ghost Rider again, resulting in major emotional confusion and distress. In a drunken stupor, Blaze approached Gunmetal and his fans, and paid him to kill the Ghost Rider.

Shortly after, Gunmetal Gray caught the Ghost Rider on the road. He emptied both barrels at point blank while both were going full speed.

The Rider walked away from that, so Gunmetal called in a marker to have a truck full of liquid nitrogen take a detour in the area. He then drove the truck straight into Ghost Rider who was interrogating a man in a truck stop. This killed several innocent bystanders but failing to destroy the Rider.

Gunmetal Gray had learned that a corrupt police detective was the Ghost Rider’s next target. He found the man before the Rider did. Since Gray knew that the Rider is the spirit of vengeance, he made the detective ask the Rider to avenge him before murdering him. This bound the Rider into going after Gunmetal Gray.

Now certain that his target would come after him, Gray decided to wait for the Rider to turn into Blaze. He would then kill him with his bare hands.

He and a member of his entourage nicknamed Magnus (a Magneto fan ?) gleefully hounded Blaze when he was in human form. Blaze repeatedly managed to escape them due to his motorcycling skills, but couldn’t shake them off for long. Magnus was killed when charging with his bike into a storefront – the clerk there took him down with a shotgun.

Angry at the death of Magnus, Gunmetal was about to shoot Blaze when he unexpectedly turned into the Ghost Rider. Gunmetal gave the Rider his money back, telling him he was now in to avenge Magnus. He added that he would meet him a few days later at a biker rally – or destroy his rep by making it clear the Rider/Blaze chickened out.

The Rider did show up. Gunmetal Gray was ready to destroy him with his bare hands or die trying. The Rider didn’t budge, and Gunmetal shot a bystander dead to “motivate” him. This only resulted in a large number of bikers angrily taking Gunmetal down while the Rider remained immobile.

When Gunmetal woke up a few minutes later, he threw in the towel. The mercenary knew Magnus’ death was his fault, not the Ghost Rider’s. Thus, he could no longer find it in him to blame the demon.

The Rider then turned into Blaze, who forgave him his attempts to kill him – it was, after all, his own fault. Blaze also forgave himself for his attempt to have the Ghost Rider killed, accepting him as a part of his life.

Gunmetal Gray then attempted to take Blaze down anyway. But he was still too weak, and was knocked out in a brawl. Blaze then rode away before Gunmetal Gray could recover.

Gunmetal Gray is an outlaw. He doesn’t give a damn about cops, civilians, laws, morals and the like. He just does whatever he wants. He’s a casual killer, and thinks nothing of shooting somebody at random just to further his own aims.

He doesn’t kill for a living. If it resembled a job, he would have dropped it long ago because he hates jobs. He kills for sport instead, and the money is something secondary, usually handled by his entourage.

Due to his regenerative powers, he’s almost devoid of fear. He’s willing to fight even demons and superhumans, and has no problem with nearly suicidal actions. He doesn’t appear to really feel pain, and he’s certain that he can walk away from pretty much anything. Very little he does has perceptible consequences for him, reinforcing his lack of inhibition.

Gray is relentless and resourceful. Once he has taken a contract, he will do his considerable best to honour it, no matter what happens. However, he tends to also be a bit overconfident, and he talks too much when he thinks his target is at his mercy.

He has a pirate’s honour :

“They call me Gunmetal Gray, and I’ve been hired to kill you.”

“I don’t care if you’re some kind of undead thing… I ain’t gonna stop ’till you’re re-dead.” 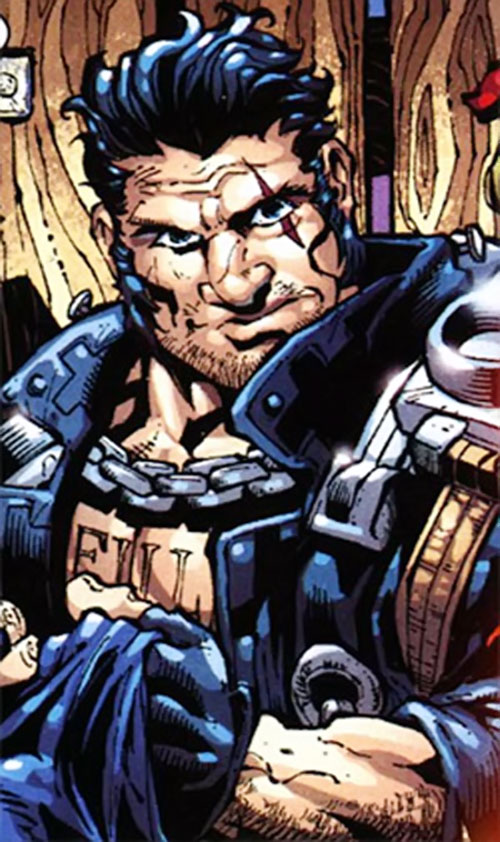 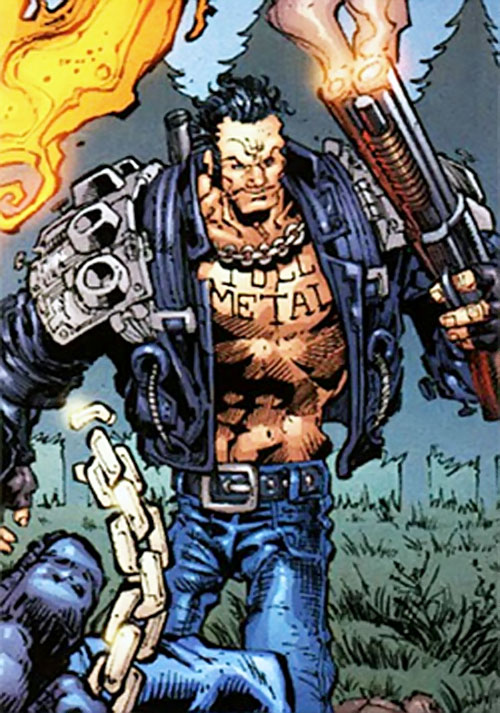