“He’s dead. I can smell that. Dead a long time. Somebody should tell him.”

This profile is meant to be read after our “base camp” Nocturnals article. Which explains the things.

The Gunwitch is a revenant. Revenants are a bit like zombies, but they have their own free will.

“Will” is in fact the operative word. They are thoroughly driven toward a certain goal. Destroying a revenant is exceedingly difficult as long as this goal remains unfulfilled – and their great willpower remains intact.

He’s also exceptionally strong. But not superhumanly so.

The Gunwitch’s body is made of :

Many sorts of attacks affecting living beings are pointless against Gunwitch. Even if the revenant is broken apart (say, by a hail of bullets) he can be put back together.

Minor damage is simple to fix – some sewing could be enough to reattach parts. But major damage requires more specialised, non-mainstream tech.

Which is what Doc Horror does. And thus Gunwitch can be rebuilt as long as he’s not completely destroyed through, say, fire. Eve apparently carries a small “repair kit” her dad made. 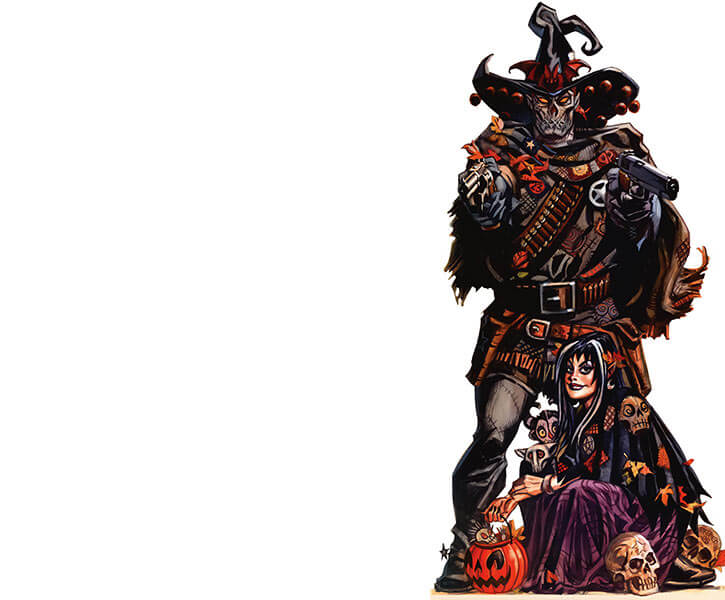 This revenant is a wizard with firearms, and a fast-draw expert. He’s blindingly quick, and seldom if ever misses.

Occasionally, he carries a Stoker 12-gauge coach gun. That is, a side-by-side shotgun that has been shortened compared to a hunting model, but not as much as a lupara-style sawed-off.

As always, see the Game Stats section for additional, more technical stuff about his gear.

Though he cannot talk and looks like a zombie, the Gunwitch is a shrewd and cunning feller. He once manipulated two vampire clans into nearly destroying each other, without a word. A good part if this work was done by letting people draw erroneous assumptions.

The Gunwitch can “switch off” the noise he makes. Even when he’s wearing his riding spurs and cowboy boots. The revenant also seems able to dim his smell when going for stealth.

He appears to see fine in darkness.

The Gunwitch is susceptible to spells affecting the undead. He can also be commanded using the lost Akkadian weirding language

His tissues also experience an increased rate of decay if hit by sunlight, making him a nocturnal creature.

The Gunwitch is completely mute, and cannot move much faster than a walk.

Lil’ wood sprites could affect the Gunwitch, putting him asleep using pixie dust even though he doesn’t breathe. 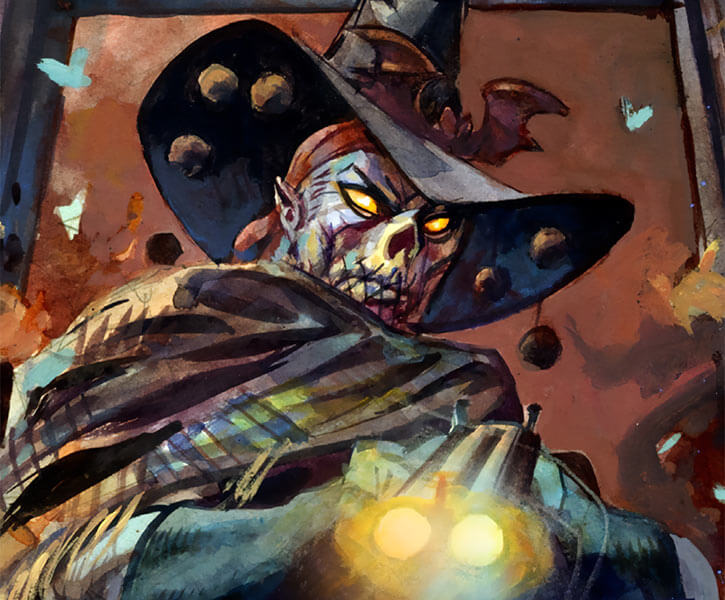 Part of the OST for The Great Silence would be cinematographomusically inevitable.

But from there it’s natural to jump to “Chi Mai”. This specific Morricone composition wasn’t used for an Old West movie but heh, close enough.

Back during the waning days of the Old West, an American pistolero had to flee to Europe. He was wanted for an unrevealed but terrible crime.

In some versions of the tale he was a ruthless outlaw, in others a fallen lawman.

The fugitive joined a touring circus with a Wild West theme. His act was a spectacular sharpshooting demonstration.

The man never gave his name, always wore a hood, and was fittingly billed as the Sixgun Sorcerer. Part of the carnie patter was that the Sorcerer had sold his soul to the Devil in return for never missing.

Decades later, he returned to the US – though it’s unclear whether he was still alive at that point. He was there during the 1960s, and reached Pacific City.

There he became a thrall and enforcer for Justice Xindel Hemlock, nicknamed “The Hanging X”. A capable occultist married to an undying witch, Hemlock knew the lost Akkadian language to order the Gunwitch around.

Decades later, Doc Horror learned of the revenant – though at that time he didn’t know about the late Judge Hemlock. He was intrigued, and of course Eve wanted to see the zombie.

They found his grave in P-City, and Doc used weird science to re-animate the corpse and binds its soul back to its remains.

(The Nocturnals RPG adds that the Horrors actually came to interrupt occult grave-robbers. These were hoping to reanimate the revenant to be their weapon.)

(The tech Doc employed may be related to what he used for Polychrome to stay on Earth. One suspects it requires Eve’s help to work.)

The revenant immediately attached himself to Eve. He became her de facto bodyguard and sitter, and thus Doc’s helper and a core member of what would become the Nocturnals.

It seemed that the purpose keeping the revenant on Earth had some link to Eve.

Evening Horror nicknamed her new friend “the Gunwitch”. She presumably knows his original name, his backstory, etc.. She once off-handedly stated that the Gunwitch didn’t count as a cowboy since he never herded cattle.

But her dad and the rest of the Nocturnals realise that it’s probably best to let the revenant keep his secrets.

The Gunwitch has been steadily serving as a scout and enforcer for the Nocturnals.

When Eve doesn’t need security, Doc prefers to send the Gunwitch to investigate new situations. If the revenant gets “slain”, it’s no big deal. So it’s the safest approach.

The Gunwitch also helped at least two hybrids escape from the Narn-K labs in P-City – the Raccoon, and Komodo.

When the local mob decided to investigate the legacy of Judge Hemlock, Gunwitch seized the occasion. To repent for what he had been forced to do for years, he gave the Raccoon an old key. It opened the cells of the late Judge’s prisoners. 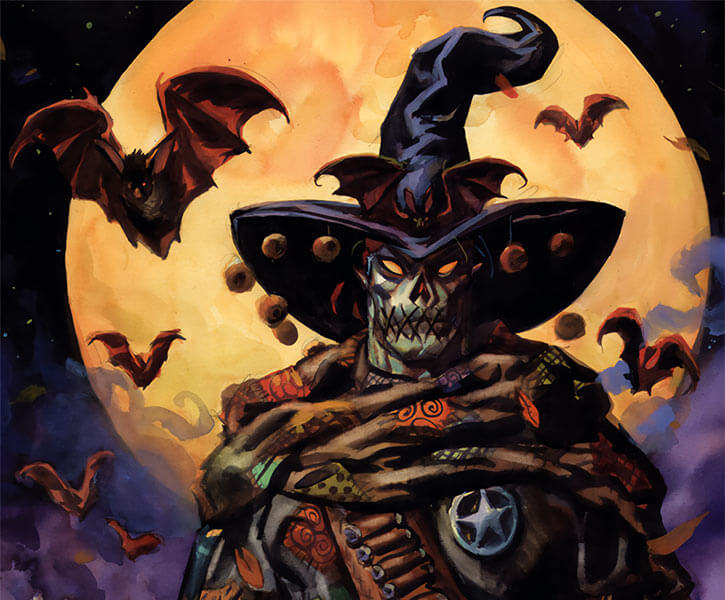 The Gunwitch is obviously dead. Just the smell is unmistakable.

He moves in a weird, stilted manner and cannot quite run – but he draws and shoots in a blink.

(In my mind’s eye he moves kinda like a Ray Harryhausen stop-motion cinema monster).

Eve “decorated” her friend by giving him a novelty witch hat, with a taxidermied bat on the front. She also hung moth-repellent balls under the hat, to stop insects from trying to eat the revenant.

One assumes that Eve also painted pentagrams on his holsters, and gave him a fake sheriff badge (which is also a pentagram symbol). But these might have been part of his Sixgun Sorcerer circus outfit.

The Gunwitch is grimly silent and rigid. He acts like the laconic, canny anti-hero of a spaghetti western movie, but with a lot of extra pasta sauce on the “laconic” and not that much on “anti”.

He is, after all, a Man With No Name. Though he has more in common with the Pale Rider.

The revenant seems particularly interested in protecting children. This may have a link with the crime that led to his exile. He’s dedicated to protecting Eve – anybody threatening her is quite likely to be slain.

His exact “revenant goal” is unrevealed, though Eve presumably knows.

The Gunwitch also seems to dislike when people are unjustly imprisoned. He likely will help them escape.

He’s not the forgiving type. More of the undying vendetta kind, so to speak.

The Gunwitch seems to have something of a gunslinger’s code of honour. For instance he’ll avoid shooting people in the back, unless he’s markedly outnumbered.

The Horrors occasionally give the Gunwitch orders in the lost weirding tongue. But they do that to differentiate general, looser instructions from orders that must be followed exactly. Thus, the Gunwitch doesn’t really mind. 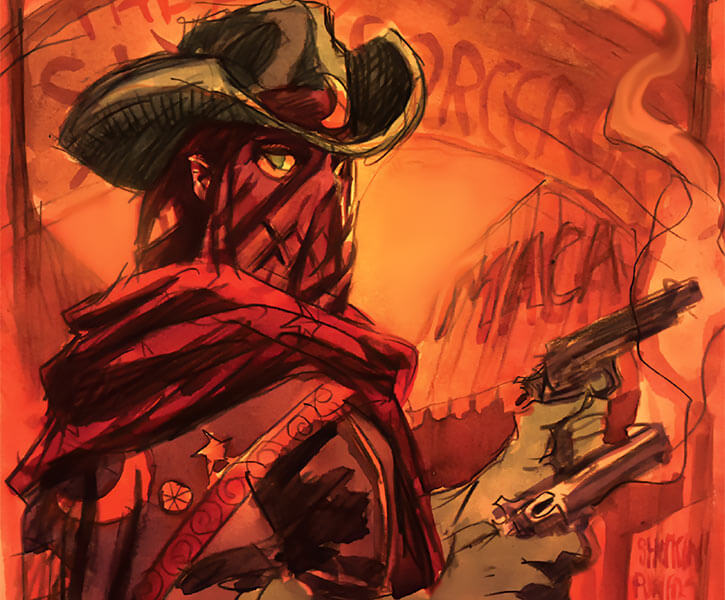 As the Sixgun Sorcerer.

Invulnerability prevents the Gunwitch from “dying”, but cannot bring him above 00 BODY. From there, somebody has to reassemble him. Or he can use Medicine on himself, if the damage allows for it.

High OV aren’t common in the Nocturnals settings, so the Gunwitch’s high AV is notable. He’ll sometimes use this differential to do Criticals.