The Valley of Gwangi is a 1969 movie in a major, fertile genre – cowboys vs. dinosaurs. It is primarily known for the Ray Harryhausen monster animation work. It wasn’t commercially successful — the monster mashes era had ended — but is a minor cult one.

I remembered this film from my teen years. I ended up buying it and you know how it is; everything has an AP value and before I knew it Gwangi was near completion.

Gwangi is more than just an instinctive killer. This carnosaur is a true monster who kills for the pleasure of it.

Gwangi is a powerful carnivore with one-foot long teeth, razor-sharp and dagger-like. He has powerful legs, allowing him to run down most prey. Gwangi also makes good use of his tail for balance as well as for making sweeping attacks.

Gwangi is commonly refered to as an allosaurus. This is how Willis O’Brien labelled him in the original Gwangi script back in the 1940s. O’Brien apparently didn’t draw much distinction between the big theropods, since he also referred to the T-Rex in King Kong as an allosaur on set. 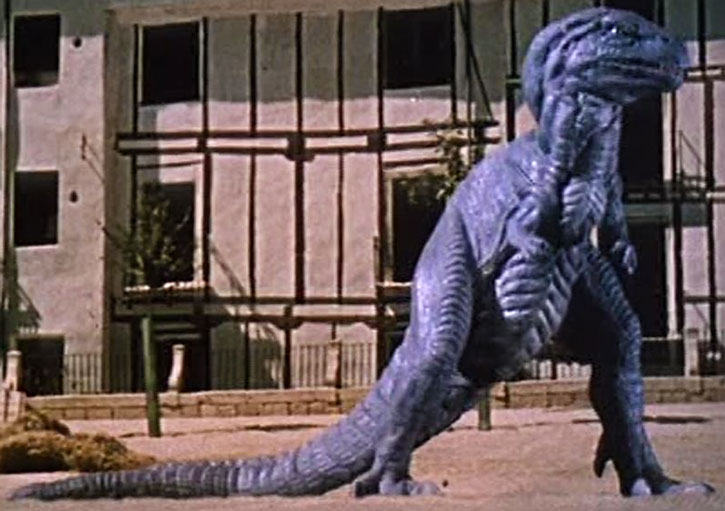 Interestingly, both the Kong rex and Gwangi himself (including the version created for the aborted 1940es movie) were based on the same Charles R. Knight  painting of T. rex. It was his second-most famous one, but the eyes are erroneously placed in the nasal sockets. This is also present in the Rhedosaurus’ head from Beast From Twenty Thousand Fathoms.

Harryhausen also recently put out a book — An Animated Life — where he confirms that in his treatment, Gwangi was a tyrannosaurus.

The main difference between the T-Rex and the allosaurus beyond sheer size, was the forearms and head. T-rex had tiny arms and two small fingers on each. Allosaurus had a long, narrow skull, large orbits, three-fingered hands, and usually “horns” or ornamental crests on their heads.

Gwangi has the size and three fingered forelimbs of the allosaur but the head and general overall appearance of the tyrannosaurus.

T.J. Breckenridge was the owner and star performer of a struggling show that had crossed the border from the U.S. into Mexico. The word was out that T.J. had a new attraction. This drew her former fiancé, Tuck Kirby, back into her life. Tuck wanted her new attraction for Buffalo Bill’s Wild West show. 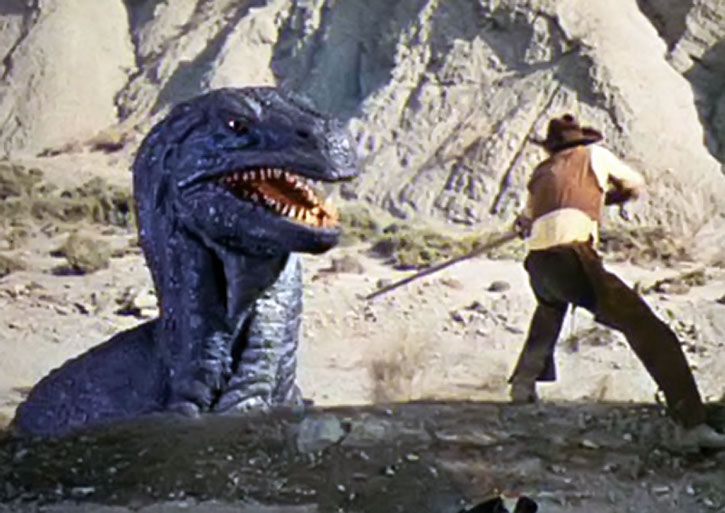 She showed him her discovery, a fully-grown horse that stood only a foot tall, and threw him out.

After T.J. turned him down, Tuck met a British paleontologist named Horace Bromley working in the nearby Mexican desert. Bromley showed Tuck fossilized tracks that reminded him of the tiny horse’s feet, so he snuck Bromley in for a peek. Bromley declared the creature to be an eohippus  (“dawn horse”, an early ancestor of all horses).

T.J. had purchased the creature from a Romani man. He had found it near an area known as the Forbidden Valley. His clan’s matriarch claimed the valley was cursed, and campaigned to have the eohippus returned. Bromley made a deal to help them return it, in hopes of following it to find a breeding population of the tiny horses. Tuck discovered the theft and followed.

When T.J. found the horse missing, she assumed Tuck had stolen it. Thus, she led a group of her rodeo performers after Bromley and Tuck. 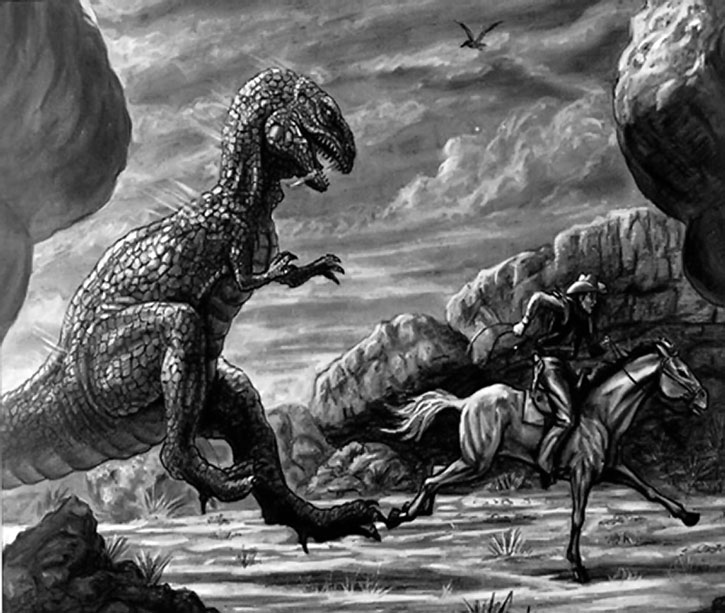 Following the eohippus, Bromley, Tuck, and the rest soon discovered why the Valley was considered cursed. A pteranodon attacked and nearly carried off a boy in the group. After killing the pteranodon they attempted to capture a struthiomimus, an ostrich-like dinosaur. Chasing it, they ran into Gwangi.

Gwangi was a carnivorous therapod. And thus, the cowboys turned from the pursuers to the prey. Gwangi dispatched a styracosaur who got in the way. The men were saved when Gwangi knocked itself out attempting to force its way through the narrow crevice that led out of the valley. T.J. and Tuck now had a new starring attraction.

Before the unveiling, the Romanis snuck in and attempted to unlock Gwangi’s cage. Gwangi broke free and killed both the nomads and Bromley. Tuck, T.J. and her men chase and are chased by Gwangi through the town, ending up in its cathedral. 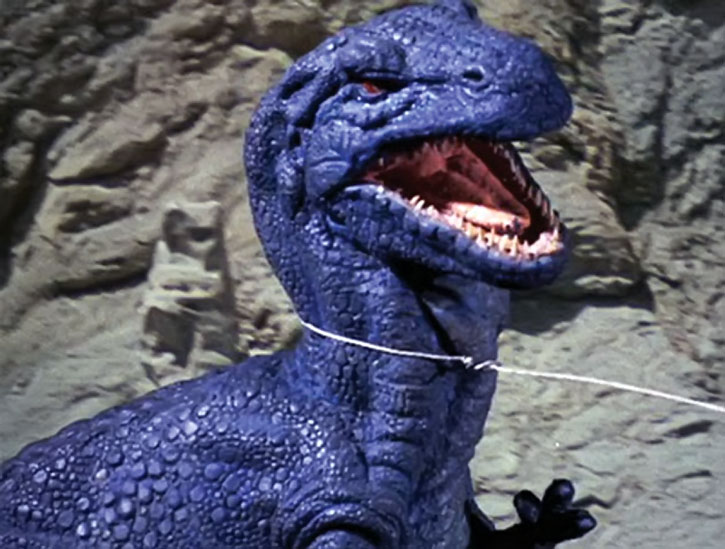 The building was set on fire during the battle, but T.J. and Tuck escaped. She then locked the doors, trapping Gwangi inside. The burning building collapsed on top of the azure dinosaur, finally putting an end to it.

The very vintage trailer with the SFX and everything.

Gwangi is roughly 35 feet in length. He is blue in color, and looks a lot like a diminutive tyrannosaur.

Gwangi is a blood-lusting monster killing for the sake of killing. Any living thing that gets his attention Gwangi will snap in it’s direction and give chase without ceasing.

Gwangi has been known to kill large dinosaurs like the styracosaurus only to take one bite of his kill and give chase to much smaller prey.

Gwangi would have an obvious home in the Savage Land .

Bonuses and Limitations:
Growth is always on (-1), innate, and already factored in.

Source of Character: The Valley of Gwangi 1969 movie written by William Bast. 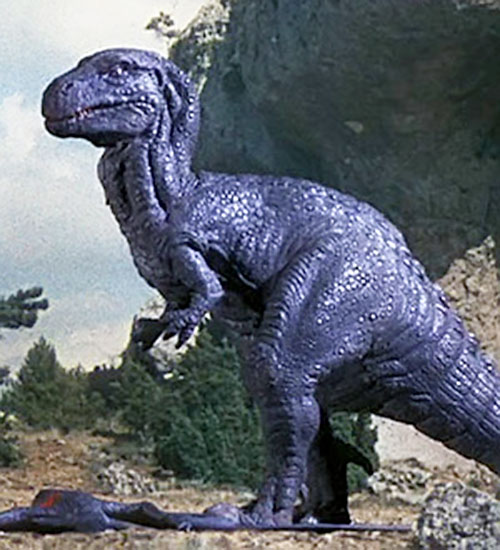 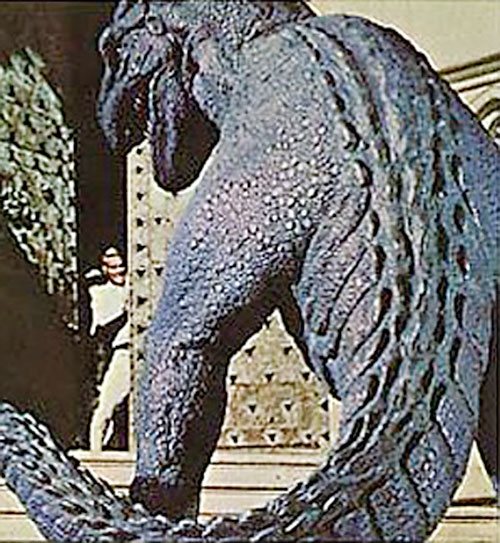 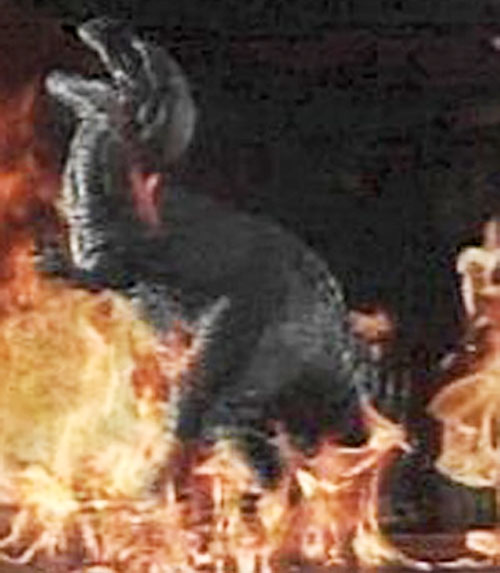 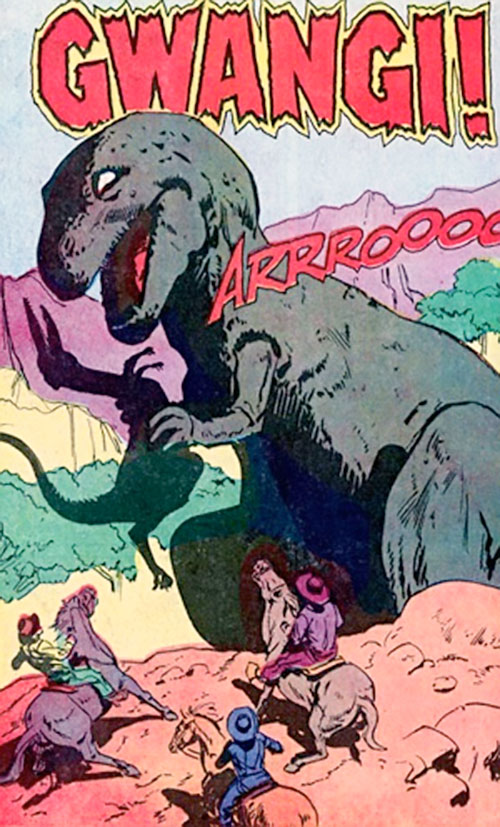 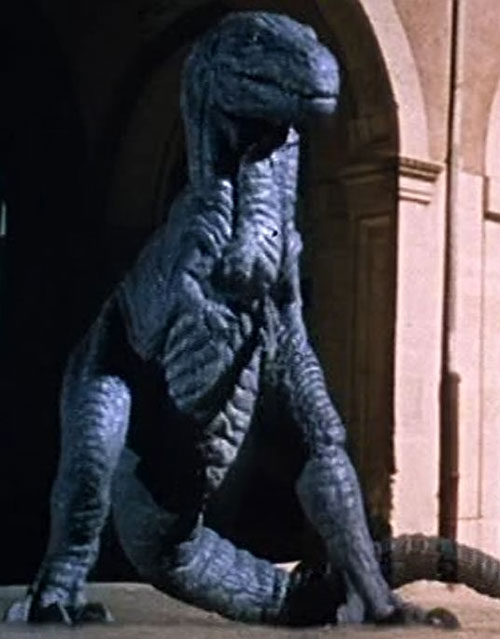