FWIW, “gypsy” as a word is loaded with racist and xenophobic connotations. It’s not something an US writer would likely know during the 1980s, mind.

Gypsy’s basic power is casting illusions. She mainly uses it to camouflage herself. This makes her, and anyone she touches, virtually invisible.

While her powers are supposed to be telepathic, she’s:

Gypsy can also use her power to make targets see themselves in a completely different environment. She thus managed to distract Despero, even though he knew what she was doing. Some are terrified into immobility, while stronger minds will lash out at the illusions.

She doesn’t use this ability as often as she could. This might be due to the uncomfortable memories of the situation in which it first manifested. She usually only uses it on a single target. This often is the person who triggered the intense emotional reaction which makes her lash out with the power.

She’s also fairly agile and stealthy, and has had some combat training.

Growing up in the suburbs, Cindy’s home life wasn’t happy. Her parents were always fighting, and her drunken father beat her younger brother. Her father never hit her, though, until one day when she tried to show him her good grade. He was drunk, and lashed out.

The shock activated her powers, and she created a fearful illusion around her family.

Scared herself, she fled, and ended up living on the streets of Detroit. Learning to use her abilities to camouflage herself, she stole what she needed. Cindy built a new identity of being a gypsy, becoming almost an urban myth.

When the Justice League relocated to Detroit, building a new team with some junior members, she became fascinated with them. She followed them around and stalked their base, but disappeared whenever they tried to talk to her.

She eventually overcame this, aiding them in battle against the Overmaster and his Cadre. As a result, she was accepted on the team. She still wouldn’t open up to anybody, inventing stories about her history.

With the League she battled menaces such as Amazo and Despero, and became close with Martian Manhunter and Vixen. When the team moved to Manhattan, Vixen let Gypsy stay with her, in hopes of getting her to open up about her history.

Helping Martian Manhunter on a case in his human identity, Gypsy befriended young runaway, Pamela Cross. She convinced her to return home. Helping Pamela convinced Cindy that she should do likewise, so she started hitchhiking.

The driver who picked her up turned out to be one of Professor Ivo’s androids. They had already killed her teammates Vibe and Steel, but the android was hesitant about killing the teenager. He let her project an illusion of her death back to Ivo, then took her home.

She was reunited with her family, her father having given up drink from the shock of her departure. Martian Manhunter found her soon after, worried given the fates of the others. Shocked at their deaths, Gypsy was prepared to accompany J’Onn in hunting Ivo. But he convinced her to stay with her family and have a normal life.

Curious and reserved, Gypsy is quiet until she gets to know people. Her powers have made her likely to observe things before letting her presence be felt. And her inquisitiveness often leads her to sneak about gathering information.

During this period she’s reluctant to talk about herself, deflecting people with fanciful stories about her history. She’s extremely loyal to her friends, though, and has little hesitation venturing into highly dangerous situations.

Writeup completed on the 2nd of February, 2012. 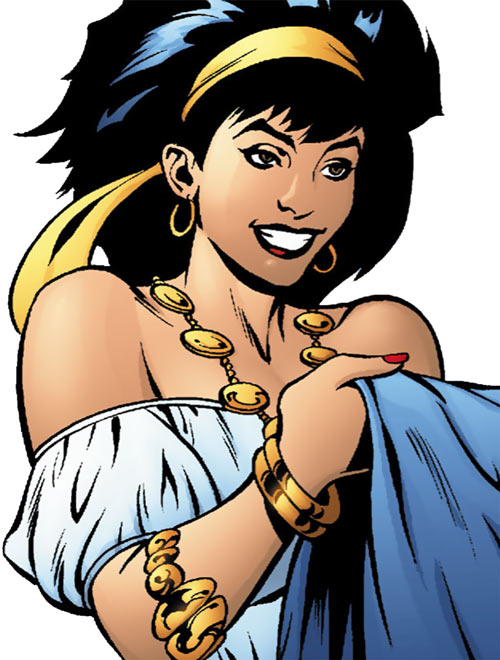