Halloween Jack has an omnimorphic molecular structure. It is controlled by nanotech cyberware which allows him to adapt his cellular structure on a genetic level into anything he understands. This allows him to assume any human appearance, stretch and mold his flesh, and manifest unique characteristics such as claws dipped in blow-fish toxin.

He can imitate virtually any person, object, or animal with incredible facility. In the case of people, he can mimic them well enough to replicate fingerprints or retinal patterns. And since he induces changes to himself on a genetic level, he can replicate their DNA as well.

Jordan Boone was a brilliant researcher for Alchemax Corporation. He was involved in some of their highest-profile research groups. These included the Virtual Unreality project, the first attempt to breach into another dimension since the time of Reed Richards.

Boone attended Alchemax University with Henri Huang, aka Meanstreak of the X-Men 2099. Jordan assisted Henri in getting out of the “unbreakable” Alchemax contract when Henri became disillusioned with life as a mutant under corporate rule.

Boone became involved with Alchemax’s Valhalla Project. He reprogrammed the company system to accept his psych profile, and he cavorted for a while as the 2099 version of Loki the Trickster.

After that scam fell through, he turned up in Las Vegas, trying to make some easy money off the casinos.

He was caught, though, not being nearly as clever as he thinks he is. When he was given electroshock interrogation, it overstimulated the nano-cyberware that allowed him to change shape. As a secondary effect it freed him from the Asgardian paradigm. In gratitude, he decided to take over Las Vegas and make the town fun again.

Recruiting Henri Huang (Meanstreak of the X-Men 2099), Boone took over the Synge Casino and constructed a Virtual Unreality projector on the roof, bringing another dimension to Las Vegas. This proved impossible to shut down. As a result President Doom was forced to erect a number of Environmental Shielding units around Vegas to prevent the VU effect from spreading.

Originally Halloween Jack was killed in 2099 World of Tomorrow #2. Yet in X-Force #92 he was taken from that timeline before his death and transported to the main Marvel Universe. Jack claimed that, when the icecaps melted and flooded the world in 2099, he created a limited chronal anomaly around his citadel, transporting himself and it to an earlier era.

Back to the present

While examining historical documents of the era he came across a picture of Domino, and fell instantly in love with her. Discovering that she was destined to die soon, he teleported her to his citadel, where he kept her prisoner and professed his undying love for her.

Unimpressed, she managed to overload his chaos engine, and forced him to take her to his matter transporter. She then forced him to teleport the both of them out of the citadel before it was destroyed. She left him unconscious in Vegas.

Halloween Jack looks like a cross between the Joker and Jack Skellington. His body seems entirely free of the constraints of physical limitations such as shape, form, or solidity. He has blood-red eyes, oddly textured emerald green skin, and an amazing number of teeth.

His outfit (a tastefully shredded black jumpsuit) is decorated with a number of tiny skulls.

Halloween Jack is loopy as a loon.

Among his more demented personality traits are, he has to be the center stage. Life is his show, and he won’t tolerate sharing the stardom.

As Loki the Trickster, Boone imagined himself a manipulator, a gamesman. In point of fact, he was a minor grifter at best, better suited to making his living by tricking cash out of the Greater Nevada Syndicate.

After his transformation, Jack experienced an epiphany, a paradigm shift that changed his entire outlook and life. If he was to be a monster, he would be one of his own choosing. He would devote his life to embracing the horror, and to shoving it in the faces of as many people as he could.

In his VU schemes, revenge was a minor matter. What he really wanted was to spread the chaos as far and wide as he could, to make Las Vegas “fun” again.

Meanstreak: “Oh, no – Jordan Boone ?”
Halloween Jack: “Took you long enough, Sherlock. Oh, I know… the HAIR is different.”
Meanstreak: “You’re a mental case. What are you doing here ?”
Jack: “Remember when you used to be FUN ? Well, call me crazy, but I thought we might indulge in a little nostalgia. Go out on the town, get a little wild, raise some good-natured hell… and take over Las Vegas.”

Jack: “Jordan Boone is dead and buried, Henri… I’m Halloween Jack now – the swingingest cat to headline this dull desert oasis since ol‘ Blue Eyes was cloned back in ’36.”
Meanstreak: “So tell me, Jack… What do you hope to gain by taking over this town ? Money ? Power ?”
Jack: “Revenge, my old friend… on the people who made me a monster. Let me say two words to you: Virtual… Unreality.”

Jack: “What can I do for you, darlin’ ?”
Cute Blonde: “I’m Suzanne Bruneau, sir… Floor Manager downstairs…”
Jack: “Spit it out, Suzy Q. I won’t bite… Unless you ASK.”
Blonde: “urk… um, S-sorry for the interruption, sir, but there’s a problem in the casino.”
Jack: “Well, buzz Security. That’s what we OVERPAY them for.”
Blonde: “Security’s sort of… off line.”

Jack: “ President DOOM… Sorry there’s no red carpets to roll out, but hail to the chief and all that. You need a DATE, tickets for a show, let me know, they’re on the house, wink wink.”
Doom: “Stop wasting my time, Jordan Boone, your shapechanging antics do NOT amuse me.”
Jack: “I AM NOT JORDAN BOONE !”
Doom: “Your personality disorder is of no concern to me.”

Considering his Marvel 2099 origins, Halloween Jack should be the Joker from the future, where he has actually aquired superhuman powers commeasurate with his twisted mind. He’s now loads more deadly, and his mission in life is to spread as much chaos (or as he calls it, “fun”) as possible.

Oddly enough, his main nemesis in this time is his own past self, who can’t stand the thought of sharing the limelight with anybody else, even himself.

Equipment:
Halloween Jack wasn’t much of an equipment person (surprising considering his genius in the technological area), but he made occasional use of the following items.

As Loki the Trickster, Boone actually had the same powers, but he had a Drawback that the Security Systems inherent in his nanotech limited him to a certain number of pre-programmed forms. None of those forms appeared enough to stat out, however, so any such would be purely speculative. 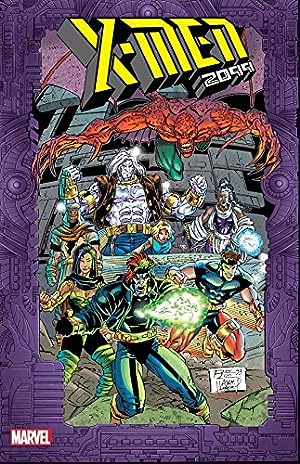 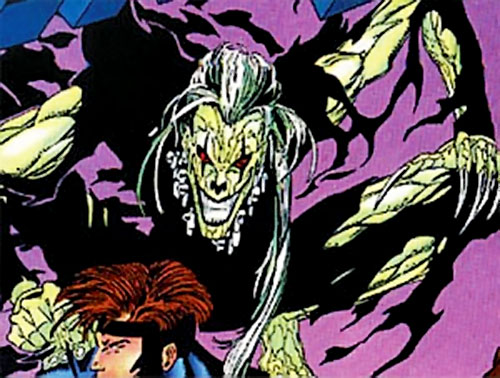 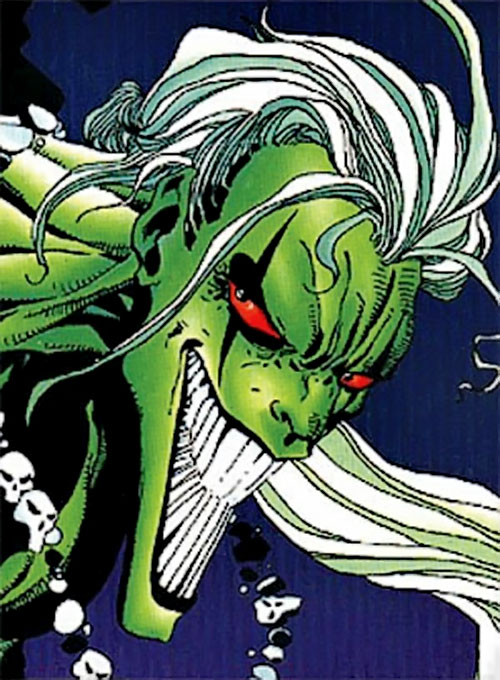 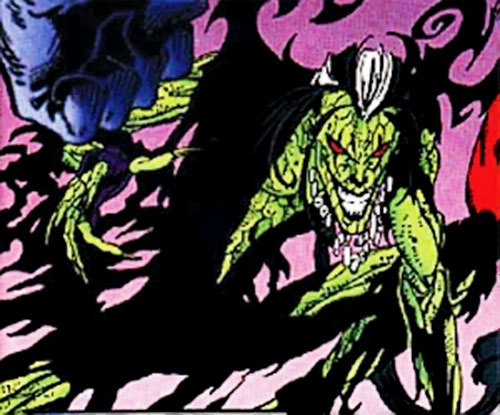