Halo is a minor DC Comics super-heroine, chiefly associated with the Outsiders super-team.

We recommend the following reading order :

Halo can generate glowing auras about herself. Each possible colour gives her a different power :

(The game stats section has a more technical and thorough description of her auras). 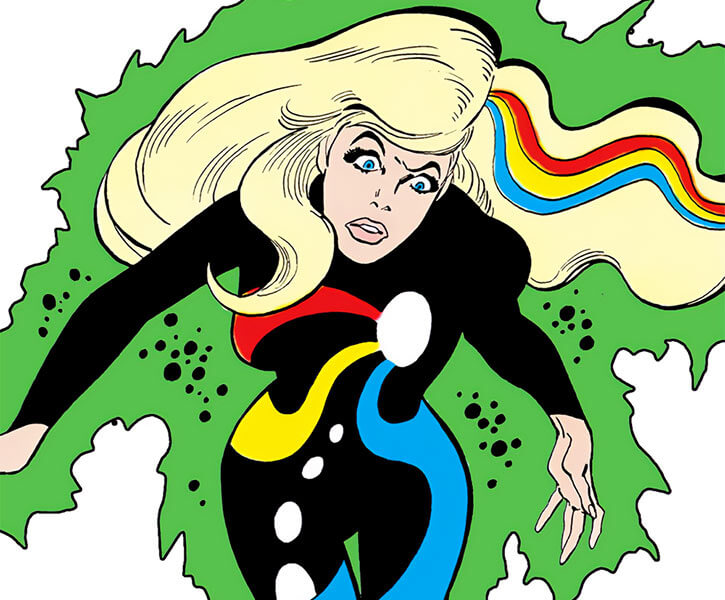 A little light in the dark

Halo can detect the light that some forms of exotic energy give off. But this isn’t a common occurrence.

She can also be affected by super-powers that control light. For instance, Dr. Light (Arthur Light) once briefly mind-controlled Halo without realising it.

Though Halo goes unmasked, she’s never recognised. This likely has to do with the bright light surrounding her.

Halo is in excellent shape.

She’s an agile athlete and flyer.

She’s also smarter that most people assume. Having seen how Batman and her fellow Outsiders work allows her to do basic detection and subterfuge field work.

At this stage, Halo has little hand-to-hand combat training. She can throw a decent punch (she works out, she’s tall-ish and she’s not afraid) but she lacks pugilistic experience.

Katana begins teaching her basic kenjutsu and judo in 1987. 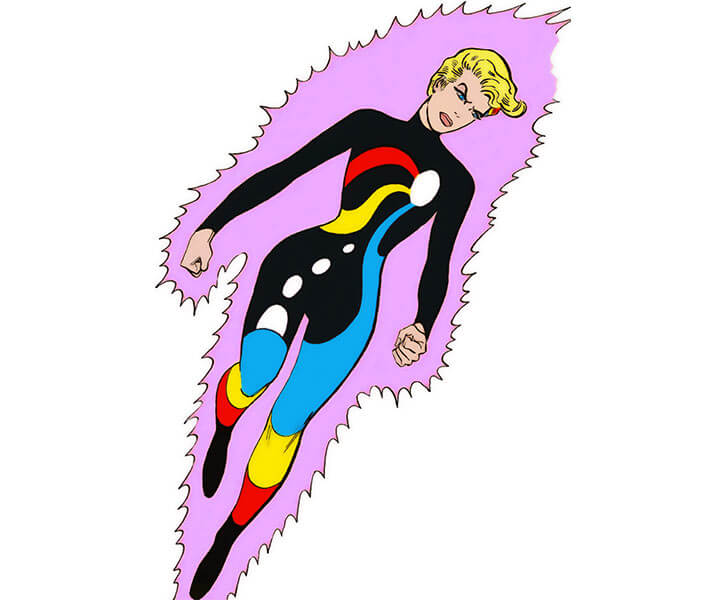 Doe is a proficient pianist and flutist. Katana insists that she keeps practising the latter.

Gaby also seems to have some sort of graphical talent. Since she came up with the green-and-gold Geo-Force costume design.

In 1986, she starts learning to drive. She’s terrible at it.

Gabby’s generally a bit clumsy. It’s not that she’s uncoordinated. It’s more that she’s naïvely overconfident in her agility.

Violet Harper was born with a photographic memory. She also was far more streetwise than one would expect. But Halo stated that she didn’t have Harper’s memory.

Violet Harper was from Arlington. This is an old-fashioned Great Plains town in Missouri. From his white-pickets-fence house, Mr. Harper operated a lumber yard.

Even as a small child, Violet was cruel, violent and manipulative.

Furthermore, small town life bored her senseless. School was no challenge, as her eidetic memory aced all tests.

She got her parents into trouble with the police, and with every shopkeeper in town. Her contempt toward the other kids also made her remarkably unpopular.

And the bad seeds

With every last bridge burnt, she started robbing schoolmates at knifepoint. They were too afraid of her to strike back.

She wanted to get out, to wield power, and to get rich quick.

At 16, she seduced a young man who had just moved into town – Mark Denninger. But he was useless at getting her out of here.

However, they lucked out.

This is your brain on drugs

Harper and Denninger happened upon a crashed car. As it caught fire, Denninger tried to get the trapped driver out.

But Harper instead stole a document holder, and riffed through its content. She then told the shocked Denninger to just let the man die.

The driver was a chemist working for Tobias Whale’s mob. He had invented a super-narcotic. Harper immediately decided to blackmail the mob over the stolen documents.

She soon convinced Denninger to help with her plot.

Mr. Whale refused to pay. The couple therefore fled to Europe to sell the formula there. In Paris, Violet got rid of Mark by making him overdose on — presumably — heroin.

Whale had sent the assassin Syonide (Nikki) after Harper. She caught her quarry in Markovia, and shot the armed Harper dead.

Syonide then checked her kill and took away Harper’s identifications. 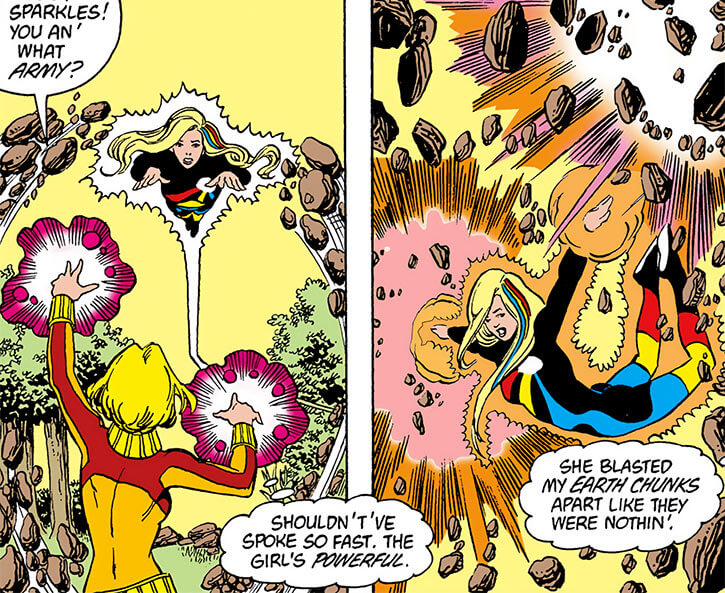 Within minutes, an Aurakles observer accidentally intersected with Harper’s corpse.

The Aurakles are a species of immaterial, otherdimensionalLocated in another reality light forms. They allegedly existed before the universe did. When the universe burst into existence, they were fascinated.

Aurakles went on to observe the physical universe. This was done by opening dimensional viewing ports into the material world.

Once a specimen had accumulated enough knowledge, it would split into two Aurakles. But this took at least millennia.

The Aurakle who’d become Halo was different from most. It was interested in observing organic creatures rather than astrophysical bodies.

(We could once see 25 Aurakles plus the Halo one. This seems to be their entire population.)

This Aurakle observed many alien species. The immaterial light form was fascinated by what it would mean to be an organic creature with mass, physical sensations, etc..

It then moved to Earth, observing Terran lifeforms since at least the Stone Age. It was thus observing when Syonide killed Violet Harper.

There was at this point… some sort of celestial alignment thing. The panel shows a literal alignment of the Sol system, which makes no bloody sense. Presumably it was a confused metaphor for something happening in the Aurakles’ dimension.

This alignment interfered with the Aurakle’s viewing port. It was sucked in, then projected into Harper’s body.

The accidental merger allowed the Aurakle to revive the corpse as a partially light-based hybrid. However, the shock rendered the alien mostly amnesiac.

(The first super-hero on Earth — a direct ancestor of the Bulleteer (Alix Harrower) — was also called Aurakles. Since there seldom are coincidences in superhero comic books, I’d imagine there’s a link.) 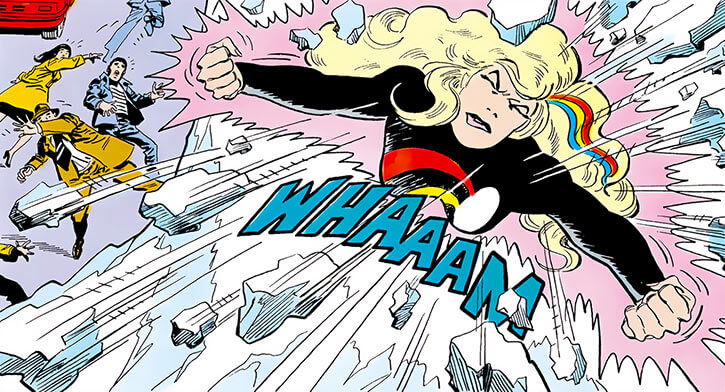 Since she lacked a name and was emitting auras of light, Wayne called her Halo.

She tagged along to help him. But her inexperience led to his capture by Baron Bedlam’s forces.

As she tried to free Batman, Halo bumped into Katana (Yamashiro Tatsu). The two allied, and freed the rest of the soon-to-be Outsiders.

As the newly-created team based itself in Gotham, Batman had Halo room with Katana. He hoped that the youth would have a Robin-like influence on the exceedingly intense Mrs. Yamashiro.

During that span, Halo briefly went with the placeholder name “Jane Doe”. She soon changed her first name to “Gabrielle”.

(The choice was based on liking how “Gabby” or “Gaby” sounded, rather than any Hebrew etymology. She just picked it in a book of baby names.)

Bring some colour to Gotham

As a newly-minted Gothamite, Gabrielle enlisted at Edison High.

After discovering her musical talent, she joined the school’s marching band. Her best friend during this era, April Daye, was the bugle player.

The Outsiders’ clashes with the Masters of Disaster also led to Gabby befriending Masters member Windfall. Halo was convinced that Windfall wasn’t a bad person. Windfall eventually left the Masters and joined the Outsiders.

For a chunk of 1984, Gabrielle worked toward dates with fellow high school student Phil Collins (no relation).

The jealous Brion Markov prevented them from sharing a first kiss. Gabby spitefully and childishly struck back, wrecking Markov’s date with a fellow college student.

After fighting some, Gabrielle and Brion ended up kissing, because people are daft.

Howbeit, they soon realised how stupid it was, and broke that off to remain friends.

You can never go home again

By 1985, Halo’s nightmares about not knowing whom she was were getting worse.

However, Wayne had made some key deductions about her identity. He had also hired private detective Jason Bard to do the legwork.

This panned out. Gabrielle — having discovered that her previous name was Violet Harper — happily moved back to her parents’ house in Missouri.

However, her unease grew as she realised that everybody — including the cops and her dad — hated her guts. And/or expected her to pull some horrible trick.

Eventually, Mark Denninger’s sister Jane called a number she found in Mark’s stuff. She warned Tobias Whale that Violet Harper was back in Missouri.

Whale and his mob (plus Doctor Moon and Jane Denninger) invaded the Harper house. Whale’s hope was that “Harper” still had the formula memorised.

The Outsiders responded in time. But the situation still went pear-shaped : 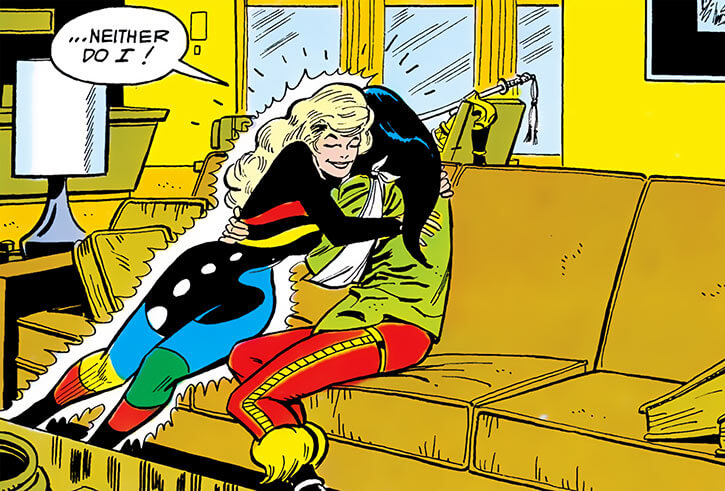 Halo had trouble dealing with the notion that she was the cruel, murderous Violet Harper.

To untangle the situation Batman decided to run advanced brain scans. That was done using equipment in the recently-wrecked Justice League satellite headquarters.

The Outsiders and Dr. Jace used intact machines to bolster the alien radiation they detected in Halo’s brain.

This awakened the Aurakle, reminding it of its previous existence as otherdimensional light.

The rest of the biography, the description and personality notes, the game stats, etc. are in the second half of this article.