“Hammer” Harrison is a professional strongman and a former heavyweight boxer. Since he’s generally hired to punch people, the gimmick he adopted is a pair of weights strapped over his hands. So he can hit harder.

These “gloves” (which do not actually look like gloves) have been described as both steel and titanium. Since such a volume of steel would be unwieldable even for a strong man, the “gloves” are presumably a titanium alloy. Maybe a grade 5 alloy , which is not unlike stainless steel in some respects.

While he’s unusually strong and a trained pugilist, Harrison is completely overshadowed by people operating on a heroic level. For instance Daredevil thought that his boxing technique was poor. On the other hand, he has a strong killer instinct.

Two-fisted enforcer “Hammer” Harrison was recruited by Baron Brimstone, a Satanist, techno-magician and would-be crime lord. Harrison and another mercenary, “Snake” Marston, were dubbed the “Satan Squad” by their employer. Harrison thought that Marston was creepy and that Brimstone was insane. But the pay was good.

Brimstone and his Satan Squad conducted a successful campaign of high-tech thefts, hijacking and intimidation. But they were stopped by the much more powerful Machine Man.

A few years later, Harrison and Marston were approached by the Arranger, a lieutenant of the Kingpin. The Arranger had them join the three Enforcers (Montana, the Ox and Fancy Dan). He christened this extended group “the New Enforcers”. The New Enforcers were sent to Brooklyn to aggressively develop the extortion revenues.

The New Enforcers’s crime wave resulted in an encounter with Spider-Man (Peter Parker). However, Spidey was missing his spider-sense. Thus, he was caught flat-footed several times during the fight. ”Hammer” Harrison thus knocked him out. However, the New Enforcers were then defeated following the unexpected intervention of the Sandman.

Years later, the New Enforcers re-formed after Snake Marston, who had been though dead, resurfaced. But they were being manipulated. “Marston” was actually the Eel (Edward Lavell), who wanted to trick the Enforcers into working for him for free.

Following Daredevil’s interference, Harrison and the other New Enforcers overheard Lavell gloating. They attacked him. The Eel narrowly took his erstwhile allies out, but was then stopped by Daredevil and Misty Knight.

Hammer Harrison hasn’t been seen since. But he has undoubtedly served as a thug for numerous interests.

Harrison really enjoys violence and punching people, and is a typical bully.

He does not speak much in normal situations, but gets more talkative during fights. 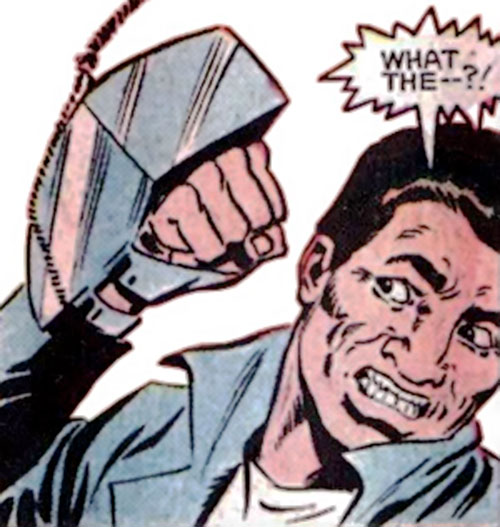 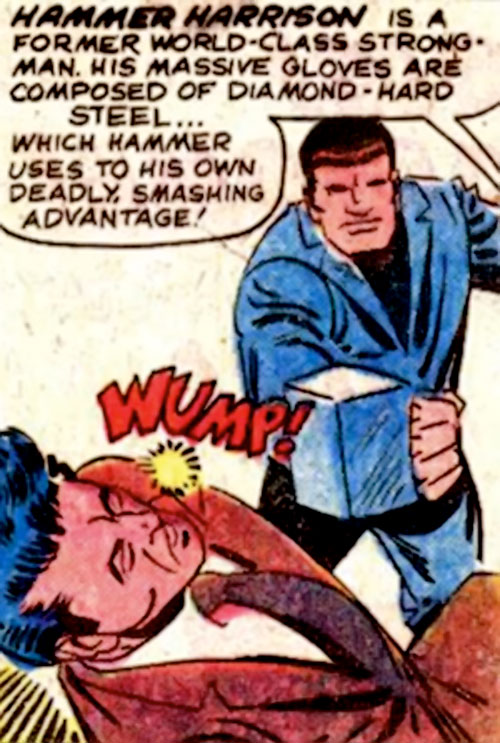