Hammer has been specially selected, bred, trained and enhanced to be a combat machine. He’s the result of a big program which involved hundreds of researchers, and considerable resources.

He was then given superhuman strength and toughness. These abilities were reputedly derived from analysis of the US operative Major Victory. When first seen, he could fight to-to-toe with Geoforce, also a superior fighter with superhuman power and durability.

Hammer later underwent a thorough round of cybernetic enhancements. Though they did succeed in making him stronger and tougher (he can now lift and throw a loaded Blackhawk helicopter – those weigh about eight tons), these augmentations seem to have been less successful than those of his sister. For instance, he now seems considerably dumber and evidences much less initiative.

See the History block for Sickle.

The costumes in the illustrations sidebar are in chronological order from 1986 to 2007.

He seemed to be the field leader of the People’s Heroes.

After the cybernetics are installed he becomes diminished. He’s not really stupid – that is, he doesn’t make any special, dumb mistakes. He’s just content not to take initiative and not to do the thinking, letting his sister take the decisions and not speaking a lot. 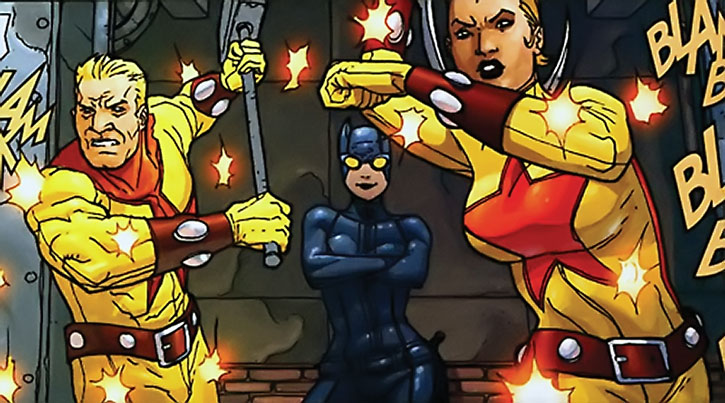 While he used to be fluent in English, his grammar is now more Russian-language-like. He’s liable to speak in Russian if surprised or hurt.

He’s proud of being ex-Soviet. A pet peeve of him is insults and mockery directed at the old USSR. Such things are likely to make him violent – and since he can bench-press a large pile of elephants, Hammer being violent is likely to result in considerable death and damage.

“You are trespassing, comrades… and we are arresting you in the name of the people’s state of Mozambia !”

Hammer and Sickle seem to have gone through two rounds of augmentation since their first appearance. One during the 1990s, and one somewhere between 2002 and 2007. Those cybernetic systems were seemingly built and implanted in Russia.

Here is my best guess for Hammer’s stats after the first round of enhancements:

After the first round of enhancements, the Ulyanov siblings have something called a “self-evolving mode”. It allowed Hammer to break free of a cage that previously could hold him.

Being generally conservative with writeups, I see nothing here that cannot be done with HPs (either Pushing or Character Advancement). However if one wants to get fancier, the Burst of Strength Schtick could be considered.

Sickle and Hammer then go through a second round of enhancement. She mentions that she and Hammer are now stronger, faster and smarter, and the Calculator mentions bio-upgrades and artificial evolutionary responses.

A conservative estimate for Hammer is to add two APs of Enhanced Initiative, one AP of Martial Artist (AV), one AP of Skin Armour, and one AP of STR to the stats just above. Plus Telescopic vision: 03.

He also seemed to have some very efficient way to find people, even in the middle of a city he did not know. Since his sister is known to have olfactory augmentations, the simplest explanation is Analytical smell/Tracking scent: 11. This is sufficient to pick up somebody’s smell from many blocks away.

Some parts of the story only make sense if they could silently communicate with each other at a distance. In game terms this would be Telepathy: 06, only with each other, but it is possible that these communications are jammable using the usual ways to break up a wireless link. The simplest interpretation of one scene is that they can precisely relay olfactory data over this link – for instance Natasha seemed to have picked up the smell of her daughter on Catwoman, and relayed this data to her brother so he could sniff the kid from several blocks away and rush there.

Though we did not actually see him running, Boris very quickly covered a significant distance – he went to Catwoman’s apartment and back within a minute or so, whereas Catwoman commandeered a police car and drove like a maniac to cover the distance. A logical conclusion would be that Boris has Running: 08.

It is also mentioned that, the longer they fight, the better they get against that opponent. No such effect is clearly demonstrated, but people wanting to include something along the lines of Defensive Adaptation: 02 and Power Reserve: 02, with each AP taking five minutes or so to unlock.

For a while our Hammer entry was one only loosely based on continuity, from my old campaign notes. Since it has been suggested to keep it, it has been appended to the real entry for Hammer.

Filipp “Hammer” Korjev has enough strength to easily lift heavy tanks over his head. He is immune to most conventional weapons short of artillery.

He’s also a highly skilled commando soldier, a formidable hand to hand combat, and especially proficient with hammers as melee weapons. Although he previously used a one-handed “power hammer”, he’s now mostly seen with a large sledgehammer made of a special titanium steel alloy.

Though he has a .50 machinegun that he can easily use as an assault rifle, Hammer prefers to use his fists and hammer.

Korjev apparently gained his powers after the American Force of July was captured and analyzed by USSR forces. It is thus quite likely his strength, speed and durability are based on similar abilities from the American agent Major Victory.

The People’s Heroes were a covert force under the direct command of the Soviet Premier, and their first known mission was to capture Batman and the Outsiders in Mozambia. They managed to defeat the Outsiders, but they escaped and later won a rematch. When they managed to go back home, they found their aura had tarnished and they were eclipsed by the all new Rocket Red brigade.

They later were seen intercepting elements of the Suicide Squad, which had infiltrate the Soviet Union. But their successful trap was broken at the last minute by a gunship assault and Suicide Squad reinforcements.

They later attempted to capture Red Star in the United States, but where opposed by the New Titans. Most of their missions — domestic security details and black ops — are undocumented.

During Mikhail Gorbatchev’s mandate, the People’s Heroes became strongly tied to him, and faded into obscurity when he left. They unofficially disbanded in the late 1990s, although they often have drinks together when they can fit a rendez vous in Moscow in their schedules.

Both Korjev and his wife stayed close to their Navy roots. They returned to the Russia’s military to act as special advisers.

Currently, their activities are mostly as mercenary advisers, the Russian armed forces selling their services as a way to procure cash. They have served along a variety of forces, from the downright criminal and despicable (to their dismay) to more palatable and possibly honest freedom fighters.

A recent, and widely publicised mission was in Afghanistan during the US-led war to overthrow the Taliban regime. There they were a very active symbol of the Russian participation to this operation.

Hammer was mostly an all-business fighter, with an attachment to the classic Communist discourse and doctrine. Now he’s back to his roots as a military man, enjoying the rough life in various, sometimes exotic locales.

A large part of his grimness has lifted after the victories in Afghanistan in the early 00s, allowing him to drop the burden of this war which weighted heavily on his shoulders.

He’s now more open about aspects of himself that were previously known only to his wife, such as his love and vast knowledge of poetry in several languages or his weakness for fine Cuban cigars. 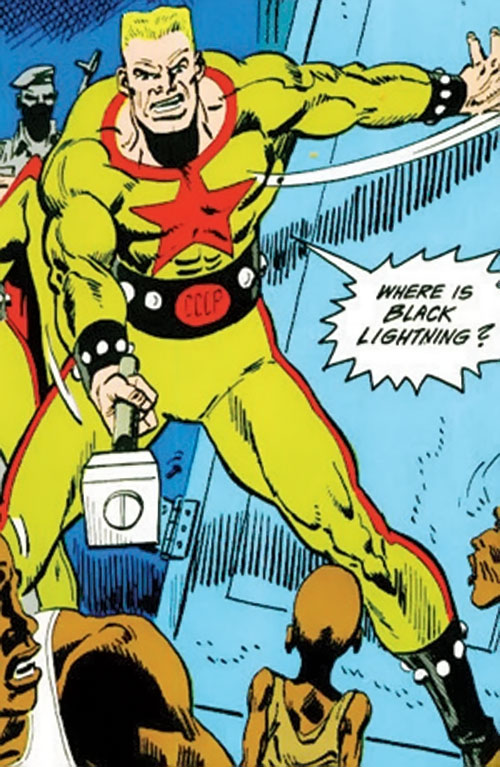 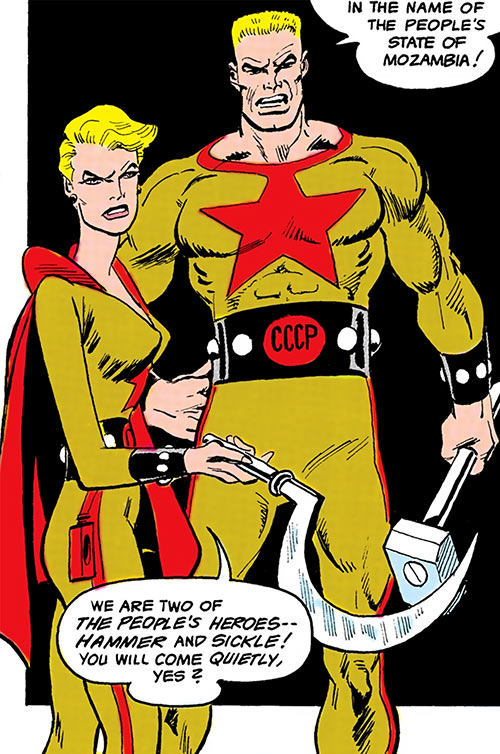 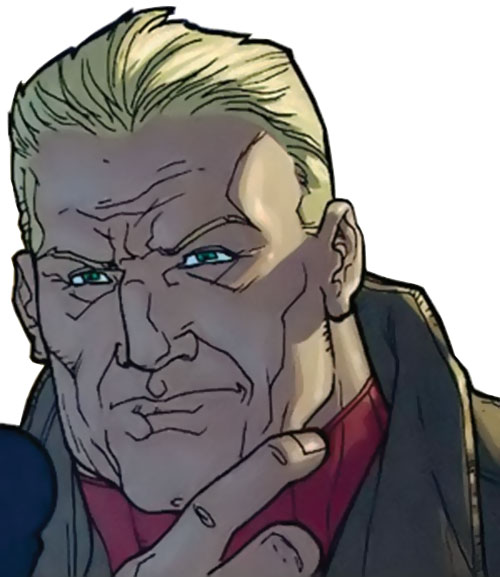 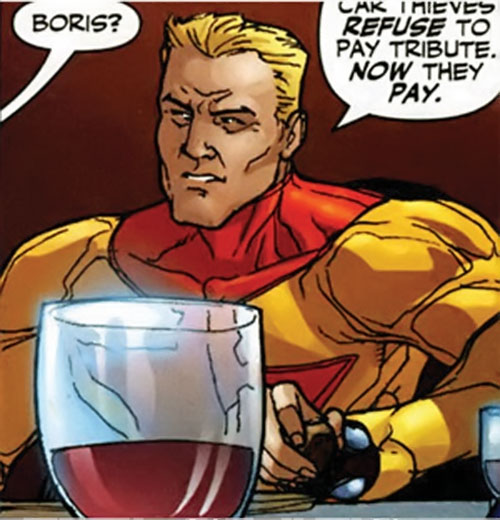 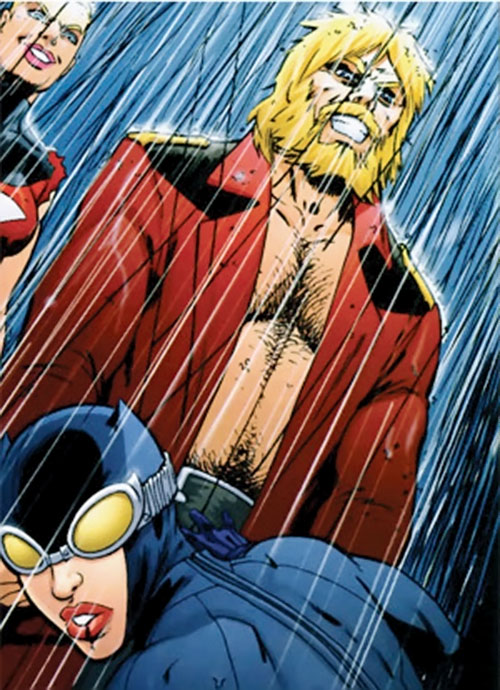 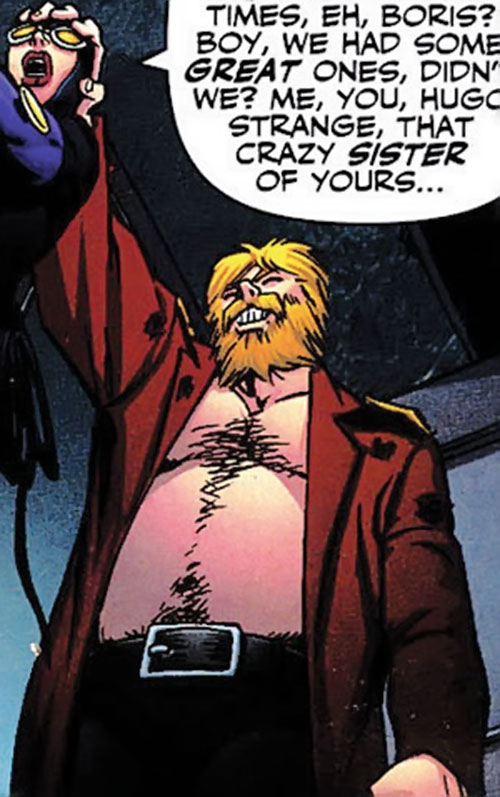 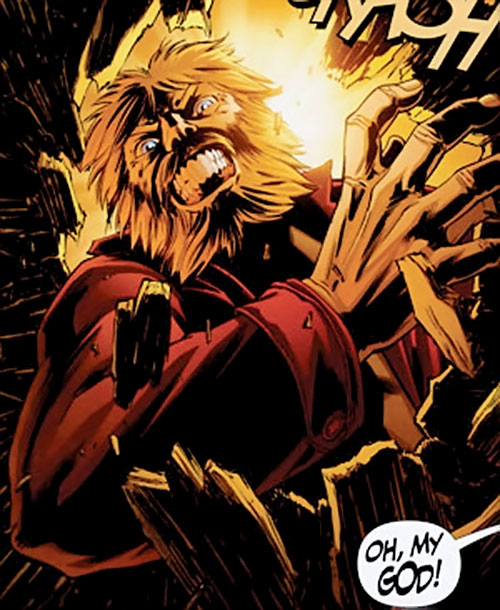 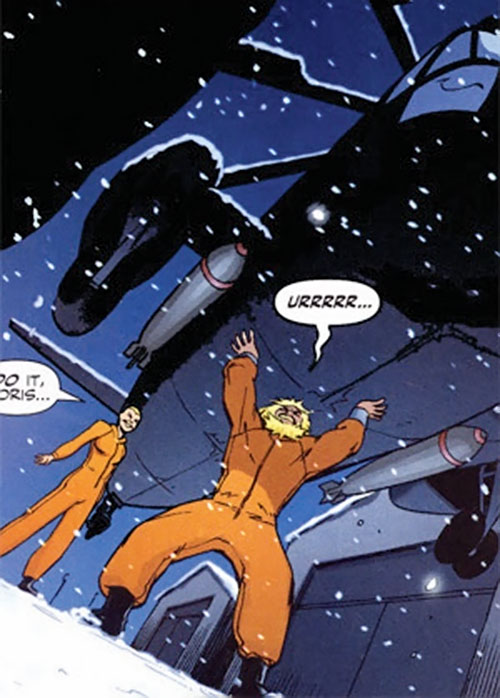