Victor Stott was born with no habits or instincts whatsoever and was born a blank slate. Lacking even the most rudimentary preconceptions, the Wonder is able to assimilate knowledge from a purely objective point of view.

At first, the strange child that neither speaks nor cries, but is able to control others with his gaze, is believed to be an idiot.

But it soon becomes apparent that Victor has the ability to memorize and synthesize material from a number of sources. Once he has had access to a huge library, he is able to form theories of human progress and argue philosophical points which leave the greatest minds of his era far behind.

As an example, with only a basic knowledge of spoken English, at age four, he spent an entire day memorizing the contents of the Oxford English Dictionary . After two days allowing his mind to collate the data, he had a full mastery of the English language, both spoken and written. A week later, he knew the full contents of the Encyclopedia Britannica .

Given that as a starting point, Stott was able to read any book at phenomenal speeds, and draw conclusions that synthesized all that he had read.

Victor’s visible intelligence, however, is somewhat off-putting. It outright frightens the weaker of will (in DC Heroes RPG terms, Aura of Fear). Those, however, who work through their fear, and keep contact with the Stott lad, are seemingly wrapped up in him. To the point where they handle things for him without his needing to ask for them (Control).

In addition, the boy is fairly fit for his age and condition. He is far more surefooted, for example, than other children and even adults would be expected to be.

This was a tricky writeup. Every reviewer seems to think that Victor has an extensive ability to control people. This makes me wonder whether or not the reviewers read the book, and also made me wonder if I was missing something or grossly underestimating things, based on the contrast with those reviews.

In retrospect, there’s definitely something there. But it’s hardly as extensive as it might have been, had the book been first published, say, a decade later.

Once upon a time, not too far outside London, there was a boy who was destined to never amount to anything.

When making a delivery for his mother, he happened on a mob of older children watching a cricket match, with the best players of the day. George Stott was uninterested in the camaraderie, but found the actual mechanics of the game somewhat interesting.

He watched until the end, when the ball hit the bat at such a speed that a minor batter became hero of the game and the town. Stott, walking away from the excitement, could only think, “I believe I could have bowled that chap.”

And so, George Stott—known as “Ginger” due to his hair and skin coloration—began to practice his bowl. His peculiar, short-legged frame, combined with the short space behind his mother’s shop in which he had to practice and a lack of mentoring, led to Ginger developing a highly peculiar style of bowling.

It made him entirely unpredictable, and he quickly flew to become the star of the league. Yet more practice, and Stott was able to uniquely cause his bowl’s path to bend, slightly, against the wind (what billiard players might refer to as “English,” and baseball players might as a “curve”), making him yet more formidable.

He was offered a place on every team in the world, but refused to leave his home town, under the assumption that the move would take time out from his playing.

Then, tragedy struck. In a series of accidents, Stott eventually lost a finger on his bowling hand, and this caused him to obsess. Stott was the only bowler capable of performing as well as he did (it is said that he played far below his optimal performance, for fear of being booted from the game). He refused to let his abilities die with his finger. So, he sought a student.

Candidate after candidate was discarded. None could be coerced into throwing a ball like Stott. Stott concluded that it was because they were too old, and had developed habits against what he needed. After discarding most of the aspiring youth of Hampdenshire, as well, he hit upon a plan to conceive his own child. Someone who he could surely train before habits developed.

And so, the aging and less-than-attractive Stott went about locating a wife, and failing miserably. Ellen Mary Jakes, however, a friend of his mother’s, was in a situation not entirely different. So she courted and married the man, and soon, despite warnings about her age from her doctor, bore Stott a child, Victor.

It is thought that Victor was different partly because of his mother’s advanced age (that is, he had a significant genetic defect). But mostly because both parents wholeheartedly wished their child to be free of habit.

The prevailing theory, of course, is interwrought with the superstition that, even though the elder Stott merely wished his child to be habit-free with respect to cricket, one must be careful of what one wishes for.

In any case, Stott was odd from birth, or rather from stillbirth. Neither heart nor lungs were in operation until the doctor massaged them into working. And his head was absurdly large and frightening. He was, understandably, diagnosed with hydrocephalitis , and given mere weeks to live, if that.

Stott survived, but was seemingly inert. He rarely moved, and never spoke. The absurdity of it all drove Ginger Stott to drink. After a few more months he left his wife and child, whose bond had grown ever closer.

At the ripe old age of three years old, Victor encountered the local priest, Father Crashaw. The elder interrogated the child on his religious training, only to be brought up short by Stott’s conclusion that God could not exist. He petitioned to have the child placed in a hospital for his heresy. But it was deemed by others more practical for the Stotts to move to Pym.

At Pym, Stott was introduced to Henry Challis, a dilettante of sorts, with a massive library. The latter invited the child to come to read, and could thus observe Victor’s progress. Pym also introduced Victor Stott to the Henderson boy, an actual hydrocephalic. Henderson latched onto Stott, seeing him as one of his kind, no matter how Stott tried to shake him.

Eventually, Crashaw crept back into the picture. This time he demanded that the child be sent to school, as the family was legally bound to do.

Challis interceded on Victor’s behalf, on the grounds that the lad had far surpassed any quantity of information that a school could hope to instill in him. Crashaw left, crestfallen, but refusing to be defeated.

Years passed, and Challis was replaced in Stott’s life by an unnamed reporter (the narrator of the book). He vacationed in Pym for a summer, bringing some books that even Challis’s library (which had been completed by Stott) lacked. Also, fewer people found themselves near the Stott house, or anywhere near Ellen, Victor, or the reporter.

The more cynical might connect the death, however, with the reported appearance and subsequent disappearance of Father Crashaw at Pym.

Victor’s mother was, for all intents and purposes, catatonic at what was almost surely the moment of her son’s death. She was committed shortly after, and died shortly after, never recovering.

Victor was buried in Chilborough churchyard, near to brewer and philanthropist Sir Edward Bigg’s mausoleum. Nothing marked the child’s grave, except for a six-inch stone, bearing the minimal inscription, “V S” and the date of death.

Almost amusingly, the Harrison boy found the body as terrifying in death as many others found Victor in life.

Victor Stott looks more or less like a normal child, except for his large, bulbous head, and lack of all hair except for thick eyelashes. His nose is described as “beaky,” and sticks out at an odd angle for the shape of his face. His lips are too straight and determined for a child near his age.

There is also something eerie about his body language, stilted and motionless for a great part. He never took the time to learn how other humans move. In fact, when not in motion, his limbs tend to hang dead at his sides.

Generally speaking, those observing him judge him to be hydrocephalic, until (and unless) they hear him speak clearly.

The narrator notes that he saw a “rare and wonderful personality peering out through the eyes That was the personality which had, no doubt, spoken to Challis and Lewes through that long afternoon in the library of Challis Court.

Normally one saw a curious, unattractive, rather repulsive figure of a child; when he looked at one with that rare look of intention, the man that lived within that unattractive body was revealed, his insight, his profundity, his unexampled wisdom.”

Despite the narrator’s efforts to the contrary, above, Victor almost literally has no personality. He was born a blank slate, and his learning comes entirely from texts of the period. He rarely reacts to others, seldom speaks, and almost never enters into a conversation. He knows it would be about as fruitful as trying to teach multivariate calculus to a beagle.

He did, upon completing his reading of the Encyclopaedia Britannica, attempt to describe what he understood of the human condition to Henry Challis. That included a summary of their evolution, their possible purposes for existence, and potential for the future. The description took about eight hours, little of which was comprehensible to Challis.

What little Challis could understand and remember horrified him. It seemed to bleed much of the mystery out of the universe, threatening to destroy the human motivation to explore.

Victor did form what might have been a mild emotional attachment to the story’s narrator, in that the latter was acceptable as a traveling companion on Stott’s walks. But that might be overstating the case.

Due to his lack of influence over the boy, though, it is safe to say that Victor definitely disliked “the Harrison idiot,” as he was known. Few events other than Harrison’s arrival could spur Victor to get away or— heaven forbid—speak to someone to have the idiot sent away.

“Illustrates the weakness of argument from history and analogy. Hegel’s limitations are qualitatively those of Harrison, who argues that I and he are similar in kind. Subtract the endeavour to demonstrate a preconceived hypothesis from any known philosophy, and the remainder, the only valuable material, is found to be distorted.”

Had Victor survived—for example, had he “simply” shut down his bodily functions to avoid death by drowning—he would likely, after decades of experimentation, have enhanced his psychic abilities.

After a name change, he might have become Henry “Brain Wave” King, infamous opponent of the Justice Society. King bears more than a passing resemblance to Victor, and was likely born at about the same time.

Stott may also have been an ancestor to Lex Luthor, who inherited some of Victor’s intellectual prowess, but none of his inhuman aspects.

Before Victor was “civilized” by books, he seemed more observant, and was more… obvious. To reflect this, increase his INT to 8 APs and his Aura of Fear Power to 2 APs. It may be worth noting that his mother was immune to the latter. It may also be worth noting that Victor’s education might not be responsible for this change, but rather his recognition that “the Harrison idiot” took no notice of such things.

Source of Character: The Hampdenshire Wonder (The Wonder in U.S. editions) by John Davys Beresford. 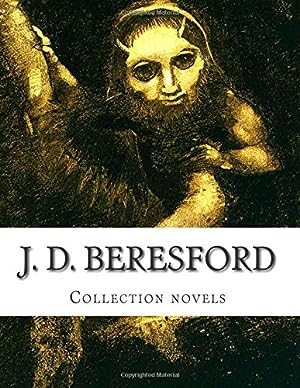