Our article about strength levels in super-hero comic books was more successful than expected. And, as it occurs, it is possible to explain hand-to-hand combat proficiency levels in roughly similar terms.

So let’s see if that interests people as well.

The character profiles on writeups.org normally include at least one set of tabletop RPG game stats (usually, the DC Heroes RPG).

Now, like with our strength article, we’re not going to fully explain the concepts, for brevity’s sake. But some of the numbers can serve as a rough 1-10 scale of proficiency with hand-to-hand combat. This is an important number, since traditional super-hero action involves a lot of biffing.

When talking about hand-to-hand combat skill, we’re chiefly concerned about:

In practice, it can be a bit involved. A big guy whose speed belies his bulk (as is traditional) could be easy to hit, but adept at using their speed to hit others. An acrobat or an expert in a “soft”, defensive martial art could present the opposite case. But here we’re gonna stick with simple cases. 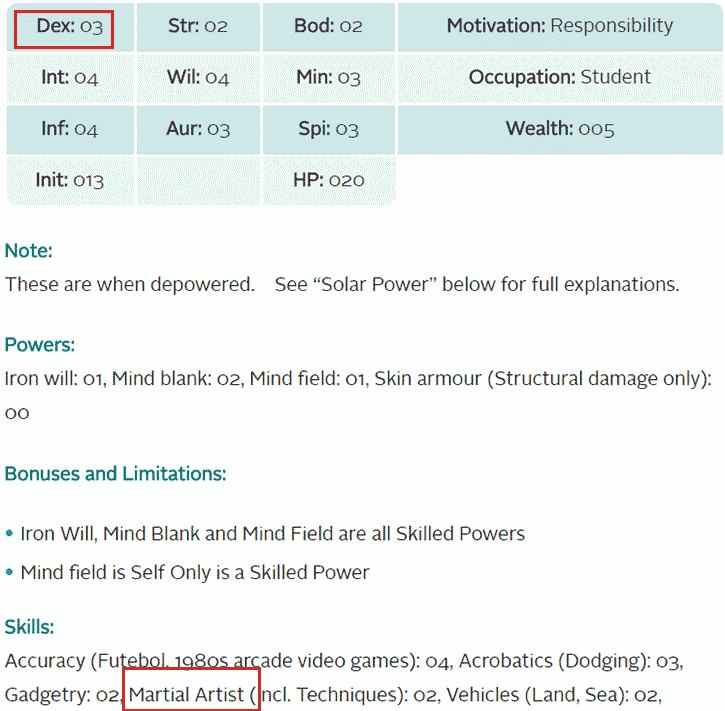 The two numbers in simple cases are:

In actuality, the use of the Martial Artist is more complicated than that, but never mind that for now.

As an aside “Martial Artist” doesn’t mean that the person is trained in kung fu. It just means that the person has a certain skill level in unarmed combat. They might be an experienced barroom brawler, or even just plain fast and aggressive.

This is like a survey. If Stupendous Susan has a 75% of winning the election to dogcatcher, it doesn’t mean that she *will* win because 75 is a big number. It means that she has a 75% chance to win, and a 25% chance to lose. It’s a roll of the dice. Literally so, since this material is for a tabletop RPG.

So a DEX 03 vs. a DEX 07 character will be overwhelmed, but strangeness *could * happen. The DEX 03 character could do something nonsensical and unexpected and catch even the DEX 07 person flat-footed. It’s not common, but it does happen in a melee.

And remember, this number is about offensive and defensive acumen. Other factors such as sheer strength, sheer mass, resolve, etc. also play a critical role in close combat.

Here are some roughs definitions of the numbers.

To go further, the master shall tread the one true path, and learn the DC Heroes RPG system (by, say, buying the Blood of Heroes: Special Edition book ).