The twins have a manifestly impossible level of strength, particularly when it comes to wielding weapons. One will carry a BAR machinegun hidden in a blanket, and the other will have a large axe hidden under their coat (plus a spare if the first axe needs to be thrown).

They are highly mobile, fearless, and abuse the fact that they look harmless.

The twin children – of indeterminate gender and names – were abandoned in a dysfunctional orphanage in Carpathia. There they were forced to feature in pedophiliac snuff movies. The pair became insane. They developed a fixation on the notion that killing people prolonged their life. 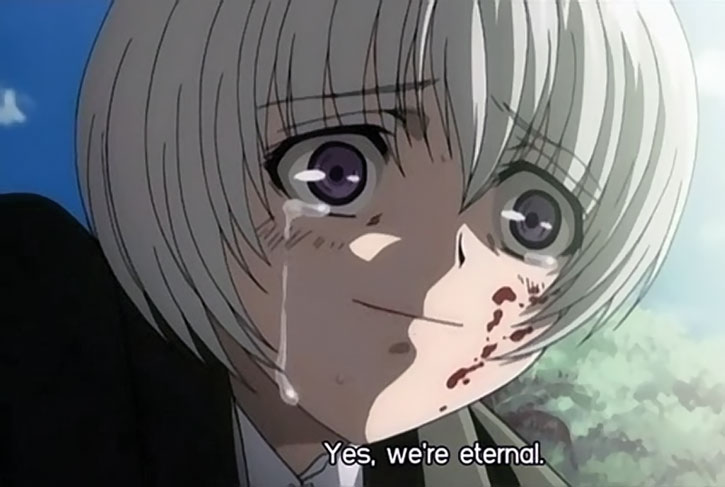 A Mafia boss called Verrocchio had the “vampire twins” sent to Roanapur, Thailand as enforcers. In the ensuing massacres, the warped children killed Verrocchio. Two Hotel Moscow operatives were also killed, and the ensuing reprisals ended in the death of Hansel and Gretel.

One of the two has much longer hair, but this is actually a wig. Both actually have the same haircut.

Sociopathic murder addicts who believe that they cannot die as long as they kill. They can alternate between behaving like normal children, and rampaging to kill everything on sight, at will.

“It can’t be helped. It’s kill or be killed. That’s what this world is about. So let’s kill. Let’s kill even more.”

“Because we want to [kill]. There’s no other reason.”

Roanapur is a very interesting setting. It could inserted whole into the DCU since we all know there isn’t all that much going on in Asia.

These characters would also fit right into any really dark gritty campaign. Imagine them showing up in Gotham, Blüdhaven, Hub City or any other bleak vermin infested hellhole that’s unfit for mankind to live in.

They should be at first portrayed as forces of nature. Their huge body count have practically every other scumbag in the city running scared and having nightmares. Later after some detective work their identities can be revealed. That ought to liven things up quite a bit!

Some briefs may be that Constantine comes across Hansel and Gretel investigating some police reports in a small town. He suspects daemonic activity, but instead comes across the diabolic little bastiches H&G. Think Stephen King style, small town horror stories here.

They could also be inserted into some of the Vertigo titles. While not immediately of a mystical nature in and of themselves they do make references to and give off the impression that they are vampires. Perhaps they have actually been possessed by some evil mystical entity. 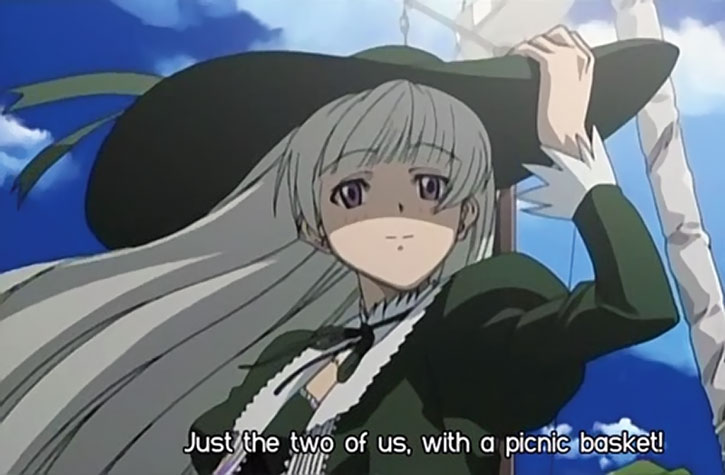 They could also be used in a villains campaign to remind the cocky players of villain what try evil really is!

Other additions might be the murders are investigated by the Midnight Mass investigations team, Night Force under the leadership of Baron Winters, and perhaps even the Batman or any of his related companions (i.e. Catwoman, Nightwing, Robin, or Hitman) in a very gothic manner in an Elseworld’s story.

I might even go as far as to note other possibilities such as Lobo or Etrigan the Demon for a more or less sick but humorous one-shot story.

Or you could toss them into a story in which they have been brought from the Neo-Earth of Post-Infinite Crisis into the world of pre-Crisis E-2 to go against the Mystery Men of WWII such as the Sandman, Dr. Midnight, the Shadow, Doc Savage, the Spectre (of the Golden Age of coarse), and for kicks Archie Comics Mighty Crusaders pre-1960’s era characterizations when comics could cross certain lines that today’s comics do not seem to do so well.

Alternatively they could easily replace the Hansel and Gretle of Fables, but that would require giving them a high degree of Invulnerability which would make them even scarier! Addicted to crack, pornography, and developing a vast number of sociopathic tendencies from hiding their true identities as the true storybook Fables they are, developed some very vicious tendencies that cannibalistic and necrophiliac indulgent activities.

Sick stuff that would make someone like John Constatine, Simon Dark, or even Ash from Armies of Darkness fame wish he was in a sick and twisted perversion of a Clive Barker book. Hell, at this point even Cthulhu would be less intimidating under the proper penmanship. Hahahahaha.

Again Roanapur or the Black Lagoon Co. could be inserted whole and come into conflict with a variety of characters in the region.

Similarly they could be used in any of the bleaker more dejected cities. Hell’s Kitchen perhaps could bring them into conflict with the Punisher. They should be at first portrayed as forces of nature with huge body counts that have practically every other scumbag in the city running scared and having nightmares.

Again you could try the mystical angle with similar effect although Dr. Strange is obviously way too powerful for them. The Ghost Rider and his assorted cast could be fun or even Blade and the other Night Stalkers.

Moon Knight, Werewolf by Night, and even Damian Hellstrom/Hellcat aka Patsy Walker duo might also be a consideration. And once again there’s always introducing them as protagonists against a cocky group of villain players.

Connections:
None because they are likely to kill them just like they kill everyone. They did have a brief low connection to Verrocchio before they (guess what ?) killed him and all his men just like they killed everyone else. (SURPRISE !)

Drawbacks:
Enemy (just about everyone in Roanapur {or any other city they are visit if you keep them mobile} but specifically Hotel Moscow), CIA (killing and torture), CPI (complete sociopaths with multiple personality disorders frequently trading rolls as “boy” and “girl”), Synergy, Misc: Body mass is 1 AP.

It should be noted that while they are children of 10-12 years old that their STR seems to be somewhat inconsistent.

Even the most athletic 12 year olds wouldn’t have more than a STR of 02 (even in fiction). This is true when it comes to their lifting and carrying capacity however they seem to have no problem wielding heavy armaments such as machine guns and battle axes with frightening efficiency. The battle-axes could be explained with a high MA, but appropriately handling the kick back of a light machine gun is difficult even for adults.

Thus it is probably best to hand wave any penalties that they receive for operating any weapons that they realistically couldn’t.

On a further note it should also be noted that the “girl” personality will always feign having a weaker Str than “she” actually does.

“Here. I’ll give you as much money as you want if you’ll let us go. Not enough ? Here’s more.”

Their actual Resources score can fluctuate wildly depending on whom they’ve recently killed. They might be deranged psychopaths, but they do know the value of money and are at least smart enough to take any obvious valuables before they clear out.

Additionally the twins will almost surely acquire the Mystique Advantage anywhere they go within a day or 2 of arriving. The Mighty Thews Schtick also helps justify their proficiency with heavy weaponry as noted above. Use of the Weapons Stash still WILL leave a trail of bodies behind as well. 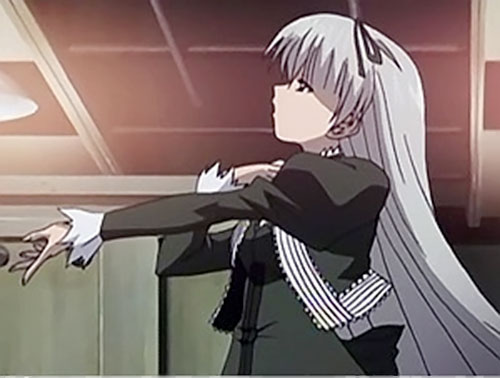 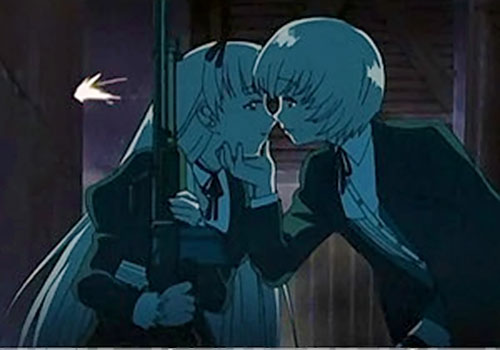 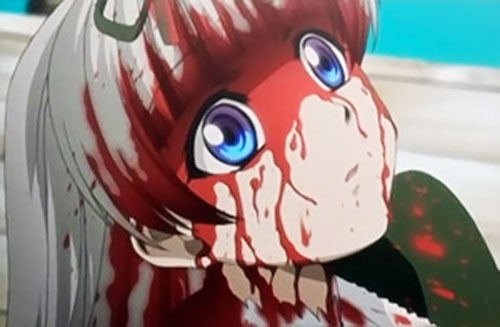 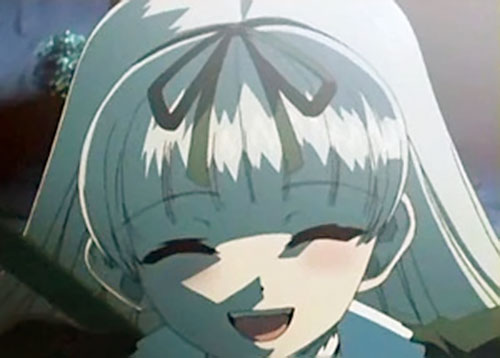