Chapter 3 — this profile — covers the period after Hardcase #18. It also covers Hardcase’s appearances in Ultraforce, as he was a rare example of a character who seemed more competent in the team book than in his own book.

Hardcase is more powerful than ever. He has grown in a remarkable fighter, he’s physically tougher and his resolve and charisma are that of a hero. He also has discovered the true nature of his powers. It never was simply strength – it was complete control over his molecular structure.

The potential of this is huge – as big as Rex Mundi’s power level. But learning to use it is another story. On the other hand sometimes it just works. For instance, Tom just had to concentrate to remember how it felt to be chronoported by the Time Gem so he could execute an unassisted time jump.

Hardcase was deserted by most of his friends and can’t find work, since very bad things tend to happen to those around him. As a result, he bought a vehicle that was built for post-holocaust flick The Survivors. Its is very well-equipped, rugged and lightly armored. This was Tom can live on the road.

(The idea for this likely comes from the Landmaster  built for the movie Damnation Alley.)

Also, Hardcase is the field leader of the Ultraverse’s premier superteam, Ultraforce.

At this point, Tom has :

During the fight against NM-E, Hardcase took enough damage to kill anyone else 20 times over. His face is still mostly hairless and badly scarred – but it’s healing.

Hardcase then was teleported to the Godwheel anew, was briefly reunited with Choice there, and then teleported back to Earth.

While Hardcase had always been a celebrity and movie superstar, the tremendously violent fight against NM-E meant huge collateral damage. Furthermore several reporters who took unreasonable risks to get ratings became part of the collateral damages.

This made almost everybody turn their back on him – movie producers and other persons needed for Hardcase’s career were too afraid another NM-E like creature would drop down on Hardcase.

Ostracised by Hollywood, Hardcase hit the road as a solitary hero. He quested for the prime mover behind most of his problems and most of the tragedies he experienced, as well as those of every other ultra-humans : Rex Mundi.

After investigating discarded agents from Mundi, and encountering serious problems with Loki and the Time Gem, Hardcase managed the impossible : finding Mundi’s lair, and entering it.

It became evident at this time that Hardcase had pretty much the same powers as Rex Mundi, and thus almost unlimited potential in his powers.

He could not directly defeat Mundi. However Mundi’s archenemy, Regina, had recovered the debris of NM-E and fashioned a power armor from that technology. She chose to use the distraction provided by Hardcase to attack. Hardcase was ejected from Mundi’s base and could not witness the end of that fight.

Hardcase is still Ultraforce’s leader and is considered by many to be the representative of the ultras. He’s a charismatic champion and the original ultra hero.

After a few weeks of healing, Hardcase stopped wearing a mask as he was no longer disfigured.

Hardcase has been through extremely hard fights. He has proven both his mettle and his humanity during those struggles. He’s no longer an arrogant movie star, but just an real, actual action hero. He still, however, has a violent, edgy side to his personality. His awful luck is frustrating and unfair, and he sometimes lashes back.

He’s at his best when he’s the leader of Ultraforce, acting like a true leader. This is especially necessary as some members are quite young (Prime, Prototype and before her death Pixx), and Contrary’s manipulation means he has to be seen as extremely reliable and competent to remain the leader.

Hardcase is very aware the acceptance of ultras by humanity is in large part dependent upon Ultraforce’s performance, and hence his leadership.

As a leader, Hardcase is direct, active and does not take kid gloves. He’s sure of himself and aware of his responsibilities. He’s so good and competent that he could be called his world’s Captain America.

“Who said anything about escaping ? I’m here to kick ass !” 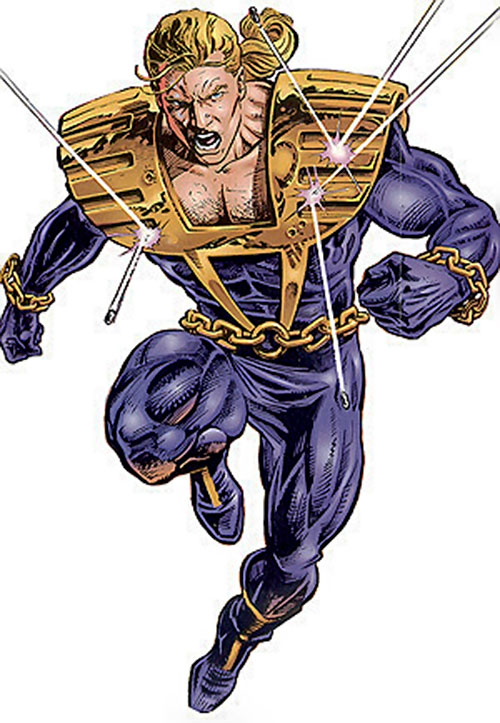