Deent is a large, tall man with considerable strength. He can take down a man with a single punch.

He’s also an experienced criminal specialising in traditional but dangerous jobs, such as bank heists. He therefore knows his way around explosives, security systems, firearms, casing joints and the like.

He has a superhuman power. His deformed, thick, leathery skin is bulletproof. He can take assault rifle fire at close range with no more than a stinging sensation and some ruined clothing. Hardhide also seemed able to ignore most damage from flame and explosions. Even a clean headshot won’t make him budge, though his eyes might be more vulnerable.

Hardhide, a minor superhuman criminal, was a partner of the first Ignition. But he was arrested while his partner escaped. He spent three years at the Joliet Correctional Centre.

When he came back, Ignition I was dead. But his girlfriend Maureen, aka Ignition II, had somehow inherited his powers.

The Hardhide and Ignition duo was active again for a few days. But Hardhide quickly became scared of the new Ignition’s manic, uncontrollable behaviour.

His fears were founded. While Hardhide was drinking heavily, Ignition II suddenly killed him by igniting the alcohol in his system to test her theory about how her own powers worked.

A big, broad-shouldered guy with a deformed, thick skin. He’s a chain smoker.

His deformed skin and broad shoulders make him look vaguely Frankenstein Monster-like, though with a more human skin tone.

An old-fashioned crook and usual suspect. He’s a professional criminal and bank robber – not a major one, but he’s competent and reliable.

Hardhide smokes a lot of cigarettes and drinks a lot of whiskey. He’s rarely seen without a cig or a bottle of Wild Turkey.

He’s a reasonable and not hugely imaginative guy, who does his job journeyman-like and dislikes surprises.

(Looking at the bullet impacts on this chest) “Y’know, this shirt cost me 50 bucks.”

(After getting repeatedly shot at) “Lemme explain something to you. They call me Hardhide ’cause I have a hard hide. Real hard. Got it ?”

Guard: “You won’t be able to get [into the bank vault]. It’s got a timer lock set for tomorrow morning.”
Hardhide: “Yeah, yeah. I watch Hawaii Five-O all the time, I know all about that crap.” (unpacks his explosives)

Bonuses and Limitations:
Half of Skin Armour (round down) applies against non-electrical energy attacks (+1).

Equipment:
When he needs to pack heat, Deent is partial to an Ingram Mac-11 machine pistol [BODY 04, Projectile weapons: 05, Ammo: 05, R#03, Advantage: Autofire]. He will conduct most heists without a gun, though. He seldom needs one, and it’s one less thing against him if he gets arrested. 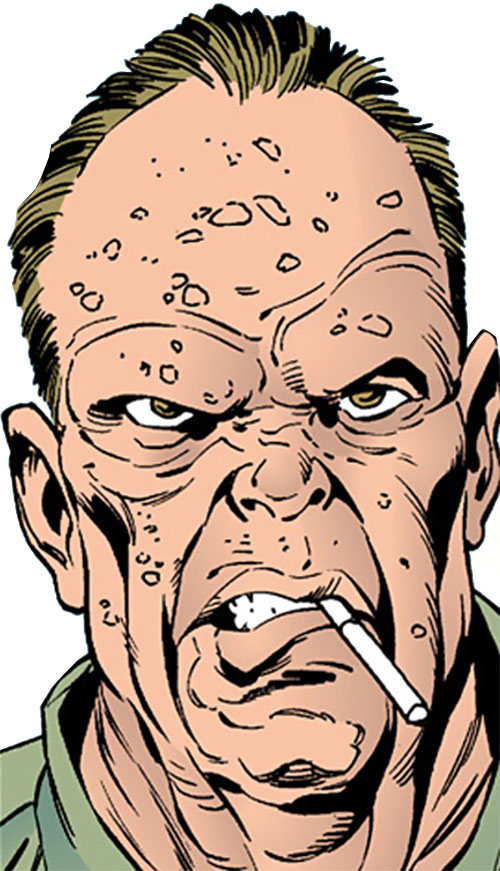 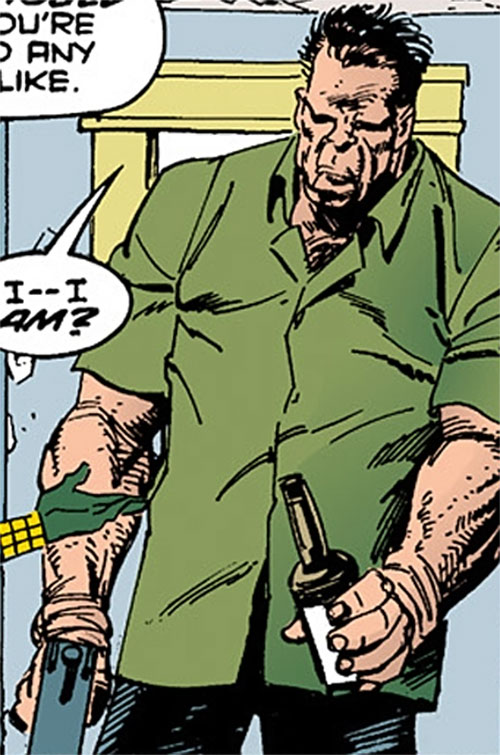