Due to the special drugs given to her by Poison Ivy, Harley has nearly-super reflexes and acrobatic ability, as well as unusual (though still human-level) strength for a woman of her size and build.

She is also highly resistant to poisons, toxins, and diseases, like Ivy herself.

Dr. Harleen Quinzell was a young psychiatrist of questionable skill and ethics who had wrangled herself an internship at Gotham City’s notorious Arkham Asylum, in the hopes of garnering material for an exploitative bestseller on its famous inmates.

She became his secret accomplice, aiding him in his many escapes from Arkham for some time before she was eventually caught and committed to the asylum herself.

Escape from the asylum

After several months in solitude, Harley was one day surprised to find the door of her cell unlocked. Venturing out, she discovered a shattered and abandoned Arkham, ruined by the recent spate of disasters plaguing Gotham. She made her way into the city in search of the Joker, adapting her current guise and demeanor in hopes of winning his favor.

Win it she did, after saving his life in an encounter with The Penguin, the evil clown took a shine to Harley, exploiting her for labor and company, with Harley loving every minute, deluding herself that her love was returned.

But the delusion was shattered when the Joker, now settled into a new power base, decided she was no longer useful. He packed her into rocket and shot her halfway across the city to crash and burn.

Harley managed to bring the rocket down semi-safely and to survive under the wreckage. She was found there by Poison Ivy, who took her home out of curiosity, listened to her story, and nursed her back to health out of sympathy.

Ivy also hoped to use her as an agent to secretly strike out at Batman, who had forced an uneasy truce on her during Gotham’s crises.

Harley mixed it up with both Batman and the Joker, and came close to doing them both in in a vengeful rage before falling once again for the clown’s alleged charms, and rejoining him. The two remain at large in the ruins of Gotham, no doubt plotting more chaos.

Harley is a gorgeous twentysomething blonde with bright blue eyes and a shapely, athletic build. She wears a skintight ’harlequin’ outfit in black and red with a scalloped, frilly white collar and cuffs, “Peter Pan” shoes, and a jester’s head-dress with dangling poms.

Her face is covered with clown-white makeup, black lipstick, and a black domino mask.

Harley is in fact crazy as loon, dedicated to chaos and confusion, though not as much as her “puddin’ “ The Joker. She is more moderate in her dementia, less violent and more playful, and is not always comfortable with his murderous ways.

She remains, however, utterly and hopelessly in love with him, and will always come back to him eventually, no matter how abusive he gets with her.

“Sheesh ! Another stiff who says Mister J. is no good for me ! Puh-leez ! I’ve heard it all before.” 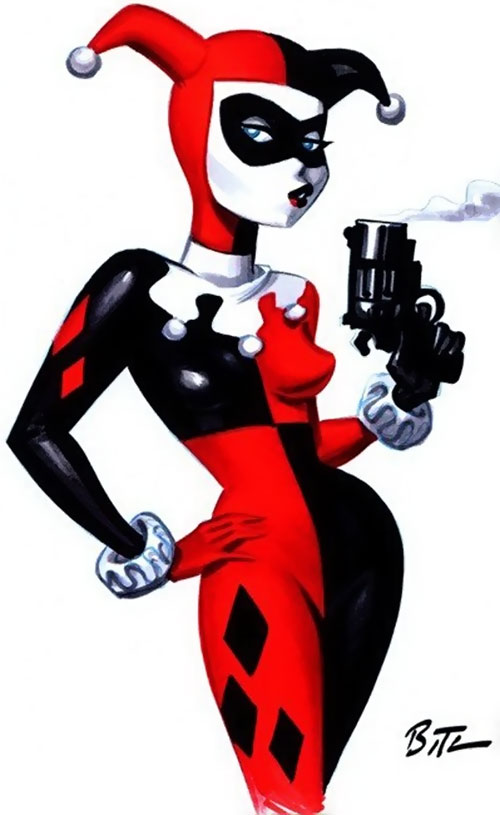