Like her husband and Pteradon she has enhanced strength. Frex, she sent Wally West flying with a backhand. She is an agile, ferocious fighter thanks to her strength and anger – though Wonder Girl could outfight her without major difficulty. Apparently, she can make her fingers as sharp as talons.

However, from her point of view, the main characteristic of her enhancements is that something went wrong. She is in constant pain – or maybe was, since the status of her condition (or even whether she’s still alive) is unclear. 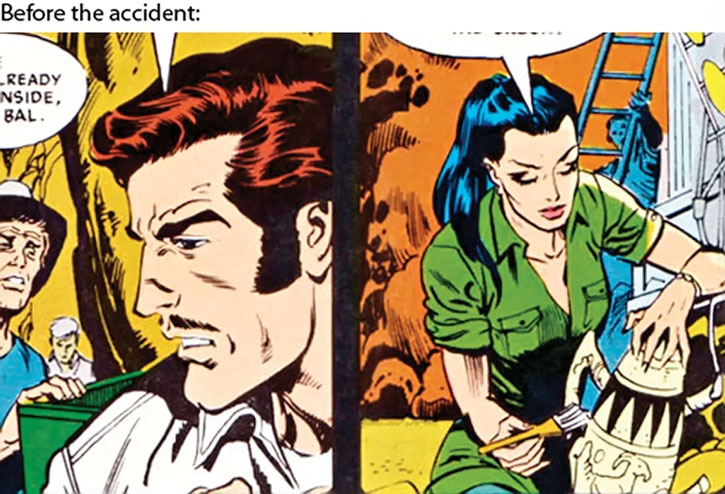 In DC Heroes RPG terms, Harpi likes Planned Knockback Attacks. She prefers to get rid of non-flying opponents by bashing them away, preferably into something that can hinder them (such as deep water). She can do that with either her raw strength or her concussive eyebeams. If given a choice of opponents, she tends to engage flying ones. She feels more at ease in the air.

Later on she starts emitting yellow power bolts from her hands instead of eyebeams.

I’ve assumed in our game stats the Bals knew some languages common among archaeologists specialising in ancient Greece.

Like Touch-N-Go and Scirocco, Harpi was part of the super-villainesses army assembled by Circe to take New York City. During the fighting she was defeated by Hawkgirl.

The initial Hybrid members had a first look (illustrated at the bottom of the column), but later changed to a more modern look. Below is one more shot of Harpi and Gorgon with their initial look. 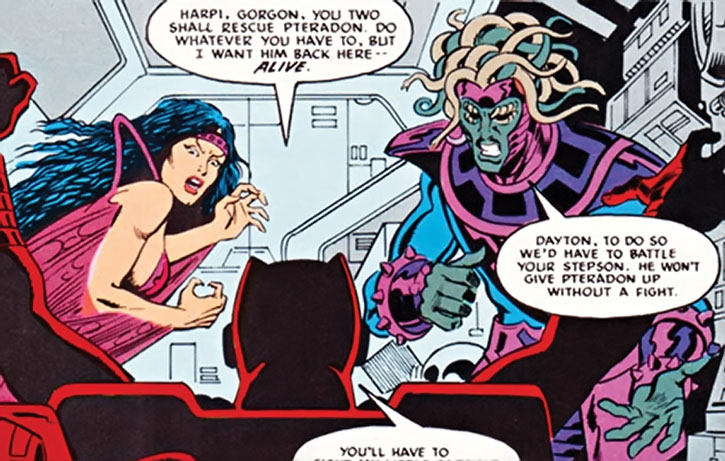 The Bals are a loving couple who stumbled into a nightmare. Initially, their passion was archaeology. They were hoping for a big find, so they would no longer have to belly dance in front of corporations to obtain funding.

They were so embittered by the financing aspect of their job that they seemed to verge on tomb robbery. When they were first seen, selling the huge ruby that they had found so that they would be set for life was perhaps more important than its archaeological value.

As Hybrid operatives, the Bals stick with each other in face of an insane taskmaster. They often try to rebel a bit – or plead not to kill anyone. If the stakes are too high, they may try to resist Mento in a somewhat passive manner. But they will defend themselves if attacked.

They are trying to keep their dignity, and not to get any blood on their hands. As time went by they recovered their courage… but they were still aware that they couldn’t do anything against Mento. Pteradon was their ally in their attempts at resistance against Mento, and was often the one taking such initiatives.

As time went by, the Bals also got used to the idea of fighting for Mento. Or perhaps their conditioning was strengthened. They became increasingly aggressive and hard-nosed in the field.

This is especially true of Harpi, who was growing increasingly bitter about it all. On his end, Gorgon was still level-headed about the situation. He would often plead with his opponents so they would find a way to free the Hybrid from Mento’s reign of terror, whereas Harpi might just lash out.

Secondary sources have indicated that Harpi was being ground into insanity by the constant physical pain she was subjected to. Some have alleged that this constant pain was permanently eased by Raven, though.

“Why are you standing there, fool ? Don’t you know I’ll have to kill you if you get into my way ?”

“You can’t protect us from Mento. His power lets him enter our minds. It lets him control us. We have no freedom here. We have nothing !” 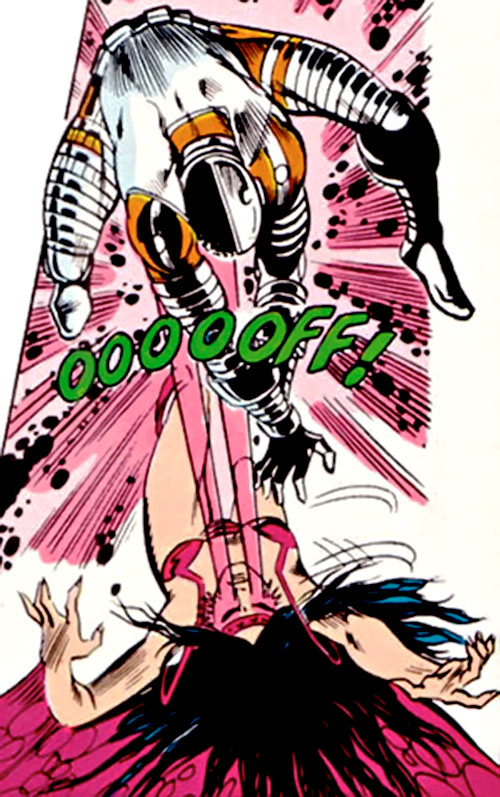 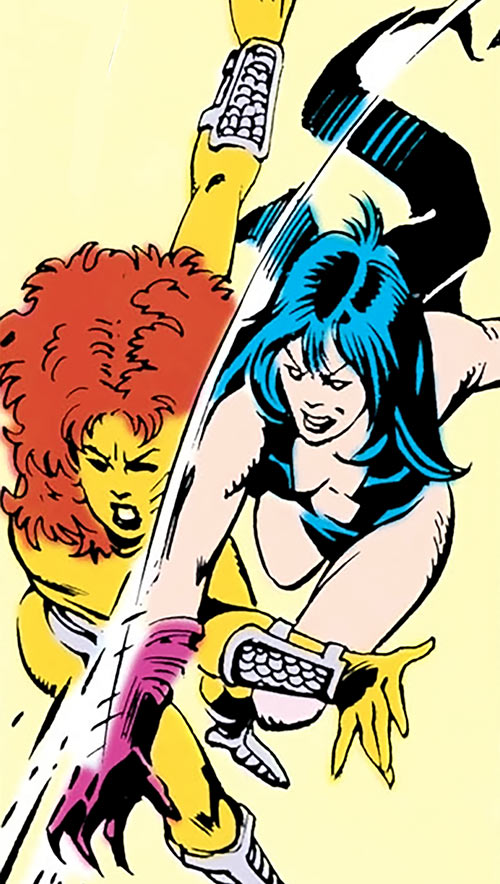 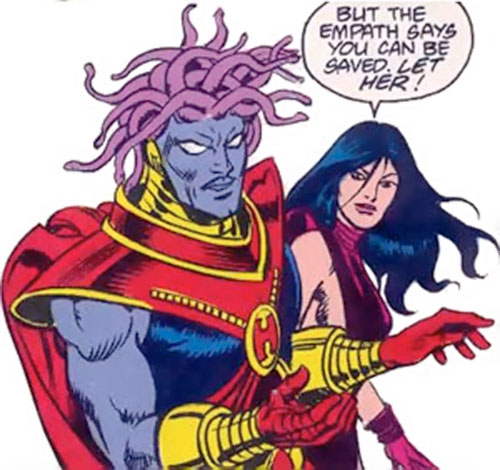 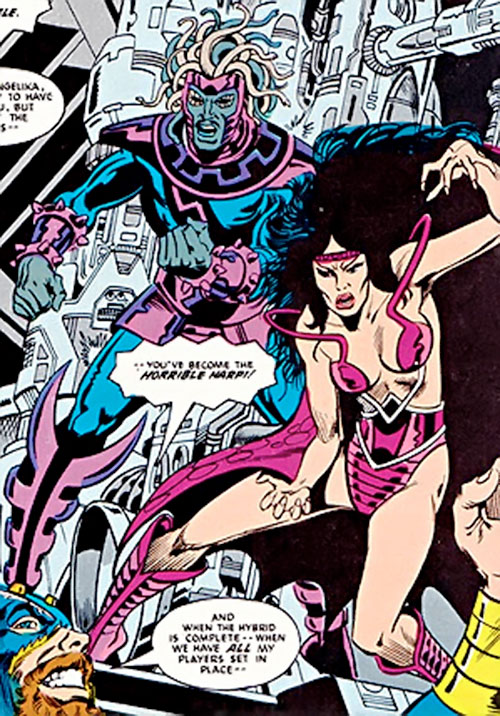 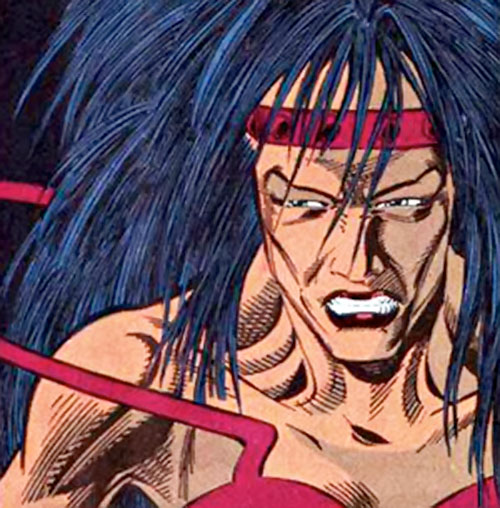