Several versions of the harpies of Ancient Greek myth were seen in the Marvel Universe.

These one are seen in a 1975 issue of The Champions. It wasn’t the greatest book, even by 1970s standards, but these harpies work fine.

These harpies are fierce fighters with scales, wings and talons. There was a half-dozen of them. 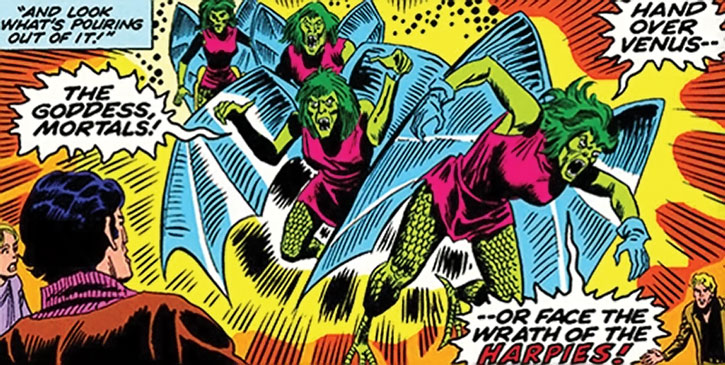 One of the harpies states that the Ghost Rider (Johnny Blaze)’s infernal fire can destroy them – which implies that other assaults cannot. Therefore they might have some sort of special durability or regenerative capability. if so, it wasn’t demonstrated.

The harpies somehow could speak fluent American English. Presumably that was a side-effect of the magical warp that took them to Los Angeles.

This band of harpies was summoned by Pluto to locate Aphrodite, then living as a mortal as a humanities professor at UCLA. Entering a magical warp, they flew into the campus. But they almost immediately clashed with Iceman (Bobby Drake) and Angel (Warren Worthington), who were students there.

The harpies had to scatter and retreat. As they returned to the warp, they were attacked by the Ghost Rider. Afraid of his hellfire, they fled.

THEY SCREAM ALL THE TIME ! IN A LOUD AND SHRILL WAY !

The harpies are aggressive and impatient, but neither stupid or too proud for their own good.

“At him, sisters ! Our claws will slice him to ribbons !”

Harpies (the green, talking ones)