Harpy is an excellent gymnast, sprinter and trapeze artist.

Since she went mad she has demonstrated impressive ferocity, speed and fearlessness.

She also had sufficient technical skills to design and build her custom weaponry.

Iris Phelios was originally a swing-girl at the Cloud Room. This was an Olympus-themed restaurant in Gotham, owned by Maxie Zeus. The very high ceiling featured heavenly fake clouds and trapezes. Trapeze artists dressed like Ancient Greek athletes swung above the clientèle.

Zeus noticed Phelios and made her a messenger within his mob. Highly loyal toward the delusional crime lord, she continued to relay his messages whilst Zeus was in prison. However, she grew disenchanted with other mobsters who lacked her loyalty.

When she caught some wise guys refusing to obey an order from the Zeus, she assaulted them. One of the made men knocked her down, and she badly hit her head. Concussed, she stumbled away. Though the physical damage was treated, Phelios was now unhinged. She decided that she would become Zeus’ agent of vengeance – a harpy.

The vengeance of Zeus

The Harpy attacked the renegade Zeus mob during a theft. She had time to badly slash the face of one of the made men. But Batman’s intervention forced everyone to flee. 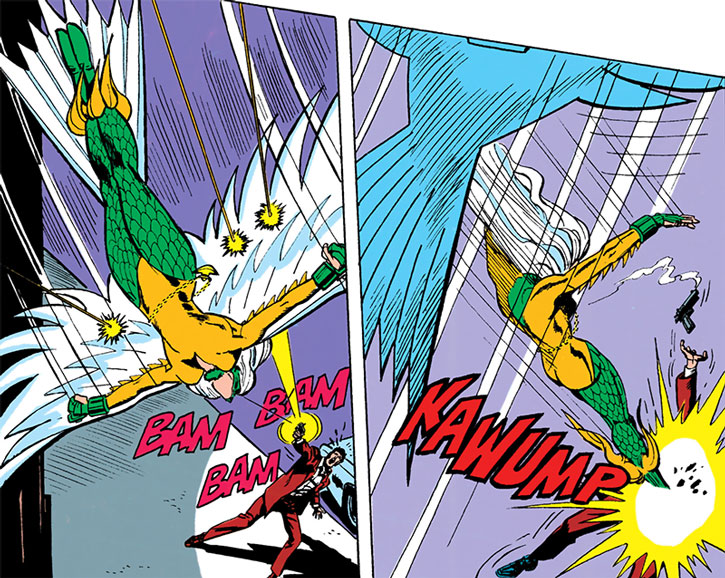 Having recognized Iris, two mobsters tried to ambush her in her flat. Yet, she killed them, then found and killed the third. Phelios nearly caught the fourth as he was fleeing the country. However, Batman again foiled her.

After attempting to fight Batman off, the Harpy tried to flee using her wings. However, she accidentally hit an I-beam. Batman prevented her from falling to her death, then knocked her out before she would eviscerate him.

Iris Phelios has not been seen since. She might be an Arkham Asylum patient.

Iris fell under the sway of Zeus’s demented charisma. Thus, she gradually convinced herself that Zeus indeed had something divine going on, or was at least a great leader. Then she gradually was caught in his delusions.

When she hit her head, she went under and started operating in Zeus’ version of the world. For instance, Batman was now the “bat-demon from Hades who shackled Lord Zeus”.

As the Harpy she saw herself as the wrath of (Maxie) Zeus. She spoke much like he did.

“Daughter of Thaumas  and Electra… The Fury shall ride the winds.”

“Your feast is spoiled, betrayers ! The Harpy has already spoken for Lord Zeus… and the word was NO !!”

“Just a woman, am I – as they said ? I am the tempest, the ravager – the fury of the Lord’s vengeance… One more mortal, and then the worst for last – the bat-demon itself.” 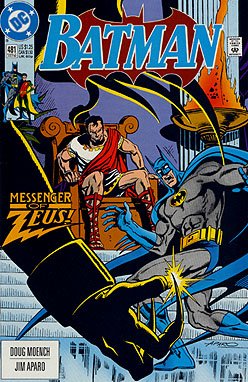