Pitzer is the protagonist of a time-travel story, originally published in a 1976 anthology. However the version covered here is from the Marvel Comics adaptation in 1978.

He doesn’t belong to a greater continuity. But as a reckless dimensional traveller, he could show up in any number of them.

Harry Pitzer appears to be fit, and has good endurance.

He is a capable driver, has good memory and works well under stress.

The time stream is closely guarded by the Interdimensional Patrol. This is an authority operating openly in some parallel dimensions  and secretly in others. The Patrol uses jumper packs that can be set to take the user to a specific dimension and back home again. Their exact workings is not public knowledge.

Indeed, getting caught by the patrol for illegal dimension-hopping would result in instant death, on the spot by execution. No trial, no jury and no appeal. As such, either the possession of a jumper pack or being present in a dimension other than one’s own was invariably and swiftly punished by death.

It takes a few hours for the Patrol to catch dimensional exiles or unauthorized jumper packs, so one better not risk it!

Harry Pitzer lives in Washington DC in 1990 in one of the many parallel universes very much like our own. However, unlike our world, dimension traveling exists and is no secret. Further, people on his world seem to wear Kryptonian-like clothing, so they are slightly more advanced than the real-world 1990s. 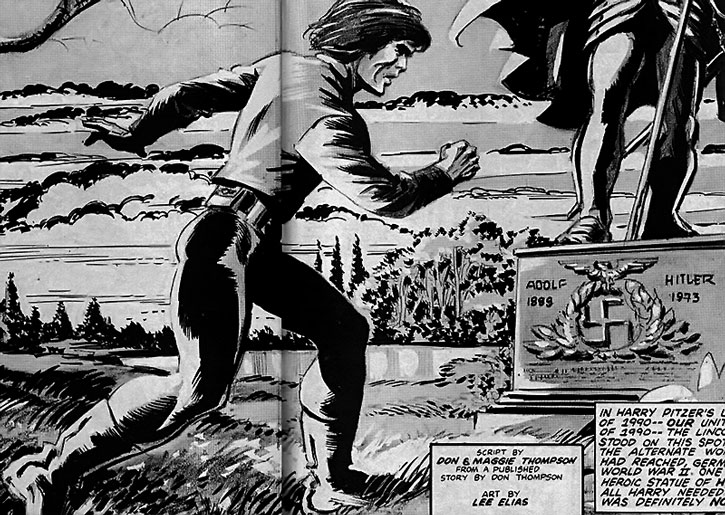 There are earlier stories of others who had made fortunes through dimension-hopping. They did that by stealing technologies and ideas, and bringing them back home, before dimension-hopping was outlawed. Now its use is strictly forbidden under penalty of death. An authority with readily identifiable uniforms frequently patrols his world.

One evening when he was out riding his sports car he happened to run over an Interdimensional Patrol man who suddenly appeared in front of him on the road. Realizing the opportunity before him, he stripped the dead Patrol man of his interdimensional jumper pack, and drove home. Harry then started touring the multiverse for a chance to get rich!

The plan was to find a simple idea on a more advanced parallel world and then copy it and make millions back home. But he would have to work very quickly and jump fast between the dimensions. Otherwise, he would get caught and executed by the Interdimensional Patrols in short order.

Harry did not quite understand how the belt-shaped jump pack worked, but decided to chance it! He would have but a few hours of switching between Washington DC of 1990 of different parallel worlds before getting tracked down.

And so he started his jump close to the Lincoln monument. Next to it was a vending machine selling newspapers. Both features allowed to easily get a sense of historical differences in other timelines .

The Axis and Roman Empires

As he was trying to find his idea in some world he arrived in a world where, instead of the Lincoln memorial stood a statue of Adolph Hitler (1888-1973) in ornamental medieval armor. Apparently, there Germany had won World War II and conquered America. 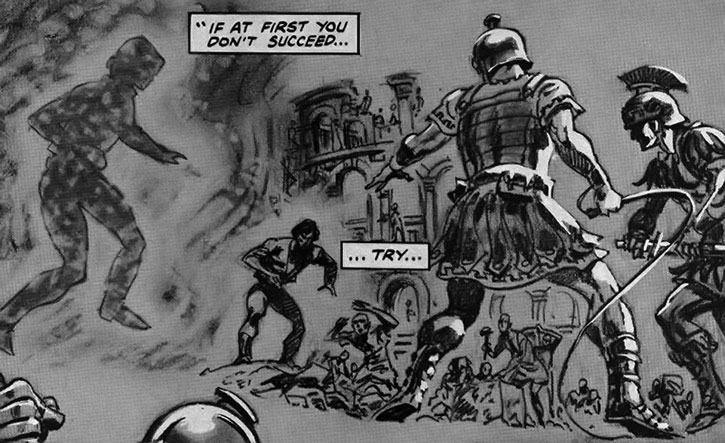 Setting the belt to one notch higher he made another jump. He appeared at the Lincoln memorial where tourists that, according to him, wore typical clothing had gathered. So he checked the newspaper by the vendor and read the headline “Pres. Humphrey vetoes farm bill”. Not a good world to check for ideas either.

The next jump landed him in the middle of a slave labor camp guarded by Roman legionnaires. In this world, the Roman Empire had never fallen. The wars of conquest had continued on into modern times and into America.

Hurriedly escaping capture, he arrived on a parallel Earth where dinosaurs still roamed the world. Harry, now the only human on the planet, narrowly escaped being eaten by a Tyrannosaurus Rex.

By now Harry had noticed that history on some worlds seemed to run at a somewhat slower pace than on his home world. On the next backwards world he arrived in the middle of a battle between British cavalrymen and Arabian infantry.

Without finding out how they could be in Washington DC of 1990 he moved on. Then he finally went through a few Americas more advanced than his own. On one of them he found an ingenious paper clip worth a fortune to the patent holder.

After taking detailed notes it was now time to return home. But he would have to do it in an uncontrolled fashion until he happened upon his own home!

He went through a whole bunch of different Washingtons. On one world his old favorite Skippy and Krazy Kat were still anomalously being printed in the newspaper. He barely made it away before some soldiers would capture him for questioning.

Then he arrived at the War of the Worlds, or it looked like it as UFO-like warships were destroying the entire city from above! No one had seen him come, no one saw him go. No one had time to notice — or remained to tell about it.

Next world looked more familiar, but a Union Jack waved on top of the White House. Jumping along he arrived at a gang of cavemen having dinner, who immediately attacked him with spears.

While pondering the alternatives of either man never evolving beyond the Stone Age or seeing the after-effect of a horrible nuclear war, Harry vanished. The amazed cavemen would talk about his exit for years.

The Russian Empire, movie stars for president and WWIV

Some worlds were obviously very wrong, while others superficially looked similar to his own until he spotted some detail out of place. On one world the Russian secret police operated openly. On others the “wrong” man was the President.

On others the vending machine wasn’t even there. And on a frightening many World War II was still going on, or then the Axis powers had won! 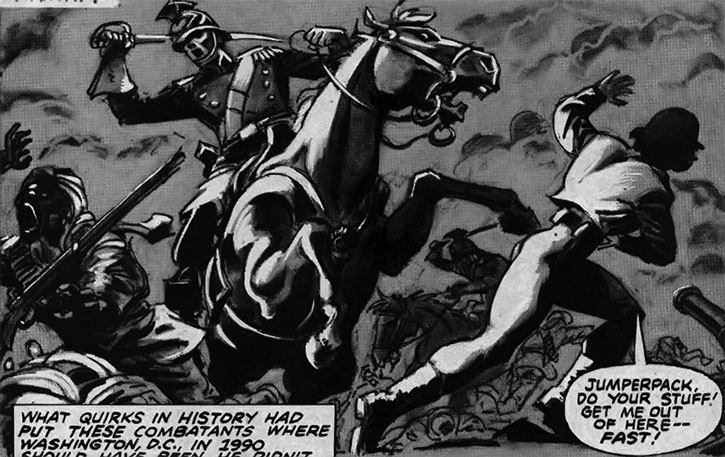 On yet another, the British Empire ruled the Americas, still with the Redcoats. On another he arrived at the middle of the American Civil War being fought in 1990 in Washington DC! On another world there was but a swamp instead of the Capital city.

Others worlds, still, had slightly different things happening than on his own as evident from the newspapers:

This is not going to end well !

Finally, on the 77th attempt he arrived home. All monuments, people, news, comics, his old home and, the ultimate evidence, even his sport car with a bump on it – all was there!

So, he quickly removed the jump pack. He then stuck a pin into the activating button so it would keep on going through the dimensions indefinitely, leading the Patrol on a merry chase. And even if caught, his fingerprints would match those of every other Harry on every other parallel world, so he was scot-free! 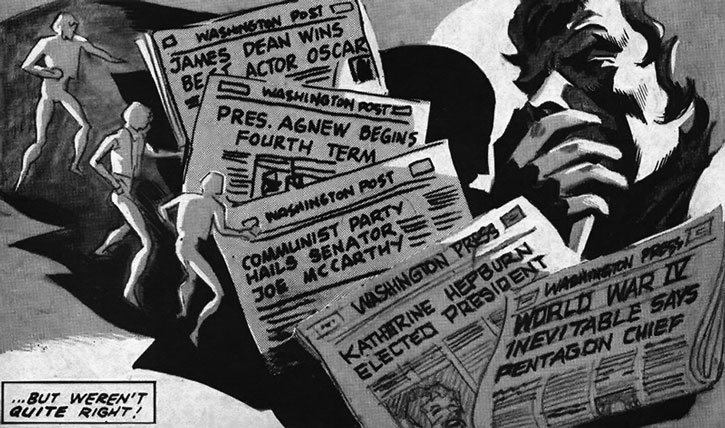 Before preparing his riches he went to the city to buy some aspirin as he had a splitting headache. The anachronistic familiar pharmacist, a promotional gimmick the drug store had started the week before Harry had killed the Patrolman greeted him. Taking the aspirin he decided to browse through the journals and paperbacks.

Eventually, he picked up The Collected Love Poems by Edgar Rice Burroughs – the book that never was (at least on his and our Earth)! It was only a matter of time before the tracer picked him out as an alien in this dimension and the patrol came to destroy him.

Things weren’t going to go well for the Harry Pitzer who belonged in this dimension either!

Harry Pitzer is a man in great physical shape. He wears tight-fitting clothing and looks ready to be on the go.

Harry is a man of strong emotions: strong hopes and strong disappointments. He greedily and immediately took his chance when he happened upon the jumper pack, knowing that he would receive either death or great riches.

He kept his head surprisingly cool throughout his interdimensional journeys. Including through situations that would have left most men panic-struck and confused. He knew that his luck would eventually run out as he popped between the worlds but he never gave up. He likely never even gave up when he knew that he would soon be marked for death.

The original Harry Pitzer of the Earth that our Harry Pitzer ended up on was left unaccounted for. While he may also have left dimension-jumping in a similar incident he might actually manage to return to his own Earth and thereupon provide our Harry with an escape route, by his jumper-pack!

During his renewed dimension-hopping to save his life our Harry would, while dodging the blasters of the Interdimensional Patrol, eventually arrive at the many superpowered Earths of the 52 Earths of the DC Universe (or why not the much richer Marvel Multiverse since the story was published in a Marvel Comics book)!

There, outside the jurisdiction of the Interdimensional Patrols, his arrival would lead to metahuman adventures to be documented later on by the likes of Rip Hunter and the Linear Men while Harry, as an exile jumping between the 52 worlds (he likely learned how to tune in on the various DC Earths pretty fast), couldn’t leave the DC Universe as that would immediately lead to immediate prosecution and instant death!

Harry Pitzer (at the very end of the story)

Harry, being relatively affluent, likely also has some professional Skills, Advantages and Connections but these were never clearly demonstrated.

Source of Character: “Worlds Enough” backup story in Marvel Preview #15 (p.40-59), by Don & Maggie Thompson, from a published story by Don Thompson in Beyond Time, an anthology book edited by Sandra Ley (in 1976). 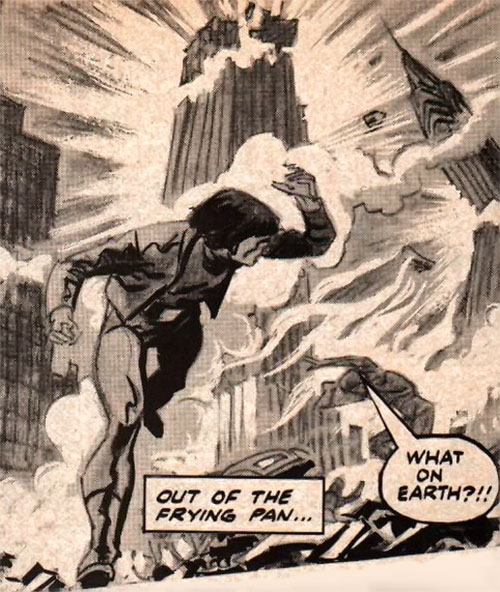 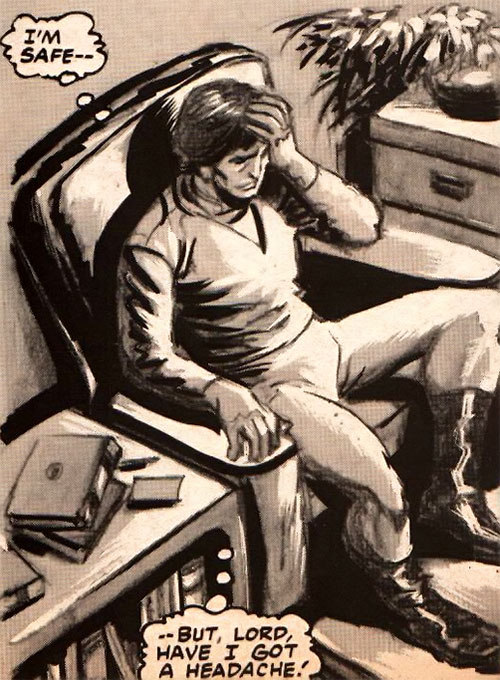