Hartly can heighten the density of air until it becomes a viscous fluid, and can control it. Usually, he uses it to form obstacles or drown people into amorphous masses of dense air.

Hartly is one of the superhuman thugs working security for the affluent hi-tech society Data Highway. DH is actually a front for the d’Angelo mob.

Along with his pal Shiv, he very nearly murdered Nick Kovac. This occurred after Kovac was marked for death for having examined d’Angelo’s Argus statue.

Callous, middle aged hardened criminal. He’s obviously dangerous, and something of a misanthrope. He smokes cigarillos.

“No one could hear you even if you could scream.”

Bonuses and Limitations:
Ice Production is actually hardened air. It “melts” 1 AP after Hartly stops concentrating on it, and the maximum speed on “ice” slides is 3 APs (-1). 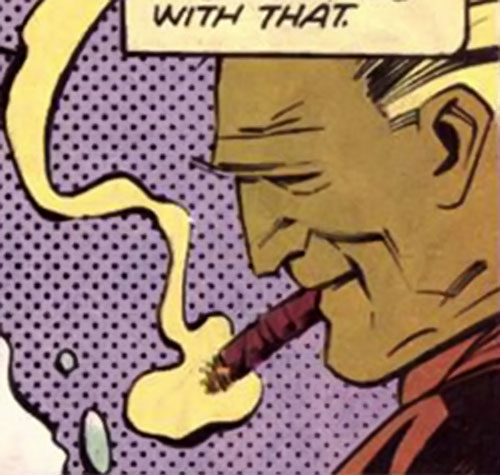