Hatchett is a big and tough man, though he does not have any specific close-combat training aside from his brawling experience. However, he’s very good at the fine art of axe-throwing. When he wants to show off, he has somebody throw a playing card in the air. Hatchett then uses his mighty double-headed axe to pin it to the nearest tree trunk in mid-flight.

Being a lumberjack (and thus okay ), he also has access to a lot of dangerous equipment.

Charismatic, large and ferocious, the man known as Hatchett became the de facto leader of an unspecified small American logging town. A greedy, ruthless bloke, he came up with the notion that he didn’t feel like sharing the handsome profits from the timberland with any boss. No matter what the implications.

Hatchett united his colleagues. They murdered the owner of the land so he and his accomplices could share the money. The next three owners also were murdered. While the police suspected foul play, they couldn’t prove anything since the whole town kept mum and supported Hatchett for the financial benefits he brought them.

The fourth owner, however, was Benjamin Turner’s sister. After she was murdered her son, also named Benjamin, lived in alleys in the small town for a few days. It is unclear why he wasn’t killed. But days later Turner, having learned the truth from GOOD and Barney Ling, landed in the logging town along with his friends Richard Dragon and Lady Shiva.

“We ain’t gonna share the profits of our work with anybody !”

(Laughing sinisterly after a tree almost crushed our heroes) “I’m sorry, my friends… we nearly had an unfortunate accident !”

As they float down the mighty rivers of British Columbia !

Hatchett has a band of stout lumberjacks in his thrall. They respect and fear him enough to commit murder when he orders so. There are close to 20 such men following his orders, and Hatchett personally trained them in his favourite fighting technique – the thrown hatchet. 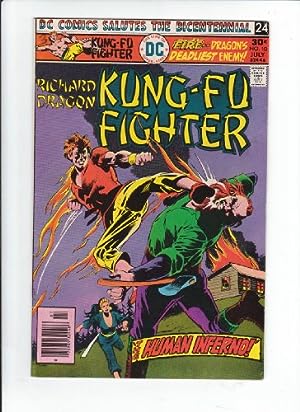