Hauer has been engineered for superhuman strength, speed and healing ability.

Hauer has formidable skill with extremely destructive weaponry. Thus, he can take large armed formations with military vehicles and win.

He can secretes a variant of the “Red” drug used by Nuke through a genetically enhanced organ. That gives him formidable aggressiveness and speed. Still, it seems much less powerful than the Red pills used by Nuke. He can also secrete a variant on the “White” drug with his organ, to calm down and counter the effects of the Red.

Under Red his vision is actually red coloured and he tends to kill everything that moves. But he can break that at will with White, which actually colours his vision white.

The dosing between red and white is intricate. In practice, the effects of Red dominate (Serious Rage, in DC Heroes RPG terms). Hauer almost always uses maximum force in combat, as on occasion almost deliberately killed bystanders. He knows that he needs a release through combat. Otherwise, he’ll eventually blow a fuse in the middle of the street and start a rampage.

Joseph Hauer’s father was described as a Dutch refugee. Joseph became a SAS  trooper and later officer. He was deployed during the Falklands war in 1982. Whilst commanding his unit there, he he was grievously wounded by a shot to the head.

But by that time, the UK had a working super-soldiers program. Previous attempts in the 1960s never gave much and were abandoned when dangerous Soviet super-soldiers such as the Crimson Dynamo or Omega Red defected or disappeared. But the projects in the 1980s were almost entirely based on the program which, in the US, resulted in the super-soldier Nuke.

Much of the work was done by the government’s main contractor, the ECE corporation.

The UK super-soldiers used reconstructive surgery. This was supplemented by the three drugs used by Nuke – Red (speed), White (down) and Blue (hypnotic). However, the drugs were used in different dosage. Furthermore, they were produced by an artificial organ invented by doctor Khan, originally from Pakistan.

The super-soldiers also received amnesia treatment, which had to be re-applied at regular intervals.

We were working secretly for the military

The Super-Soldiers were apparently deployed numerous times, including in Cold War operations and numerous murder campaigns against IRA activists and terrorists. But during a mission in Cambodia, Revenge snapped. He slaughtered a whole village and most of the other Super-Soldiers. Hauer apparently killed him then collapsed.

Hauer was recovered and brought back to England for heavy treatment. During that time, the US super-soldier Nuke also went postal in the middle of Manhattan, before being taken down by Daredevil (Matt Murdock) and Captain America (Steve Rogers). It was decided the Super-Soldiers project wouldn’t be revived, and Hauer was kept in suspended animation.

The scientific team working for ECE decided to go public with the drug-producing organ technology. They rightly saw it as a formidable breakthrough for medicine. Whitehall said no, and when most of the scientists tried to force the issue they vanished.

Years later, Hauer accidentally woke up. He was at first amnesiac and disoriented. When met with violent opposition from heavily militarized ECE security he slaughtered them and escaped. From there he commandeered the car of Sarah Wilde, a left-wing investigative journalist.

During the following days Hauer :

While starting a crusade against ECE he fought the U.S.Agent, who had been deceived into thinking Hauer was a “commie traitor freak”. They later allied. They also allied with the sole surviving member of ECE’s other super-soldier squad, the Welsh Super-Squadies.

The team reached ECE’s CEO and killed Revenge. Captain America, who had been called for help by the U.S.Agent, convinced Hauer not to kill the CEO. Being a man of enormous influence, the man was never worried by the law.

After having had a talk with Captain America, Joseph Hauer decided he would be back to serving the government despite the past abuse. He, Dalton (formerly code named Dauntless), Owen (the surviving Welsh Super-Squaddie) and Wilde started to work, often collaborating with S.H.I.E.L.D.. They later recruited Dragonfly II, the Guvnor and Princess Xantia.

However, about a month later, the Super-Soldiers were privatised. Their contracts were bought by the shadowy Mercy Security Corporation. They wanted to analyse Hauer and Dalton’s modified organisms to improve their own super-soldiers program. The team relocated to Alaska.

The Super-Soldiers were being sent to protect a Central American dictator against attacks apparently conducted by the Punisher when the series stopped.

Hauer is tall and is built like a garbage truck.

Major Hauer is a brutal, professional SAS soldier – not a super-hero. In combat he’s a killing machine, and he enjoys the adrenaline rush and violence.

His training and value will mean he’ll always shoot to kill. He never hesitated to terminate wounded opponents by shooting them several times while they were laying on the ground. He has no problems with the slaughter of hapless enemy troops, either. Those values, normal for a professional combat soldiers, are liable to provoke friction with heroes.

Out of combat, Hauer is calm, almost fatalistic. He does not seem much at ease in relaxed situations. He never strays from a rigid, crisis-management mindset no matter how casual he tries to be. He can be surprisingly warm and sincere, however – but in short bursts.

Hauer usually pairs one of his pistols and shoots his assault rifle one-handed with the other hand. He has little problems ridding targets with bullets *and* doing a Multi-Attack with the grenade launcher. He has no reservation whatsoever of going mano-a-mano with his trusty knife if disarmed.

“Of course it’s obscene ! It’s war !! They should have though of that before they started firing !”

(While charging the enemy with guns blazing) “Come on !! You wanna go !!”

There’s not much precedent for the UK Super-Soldiers in the DCU. Just import Nuke as suggested in his writeup, then import the Super-Soldiers. Unless your game is set in the UK, they’ll probably be more useful as mercs for Mercy than as a national black ops outfit. 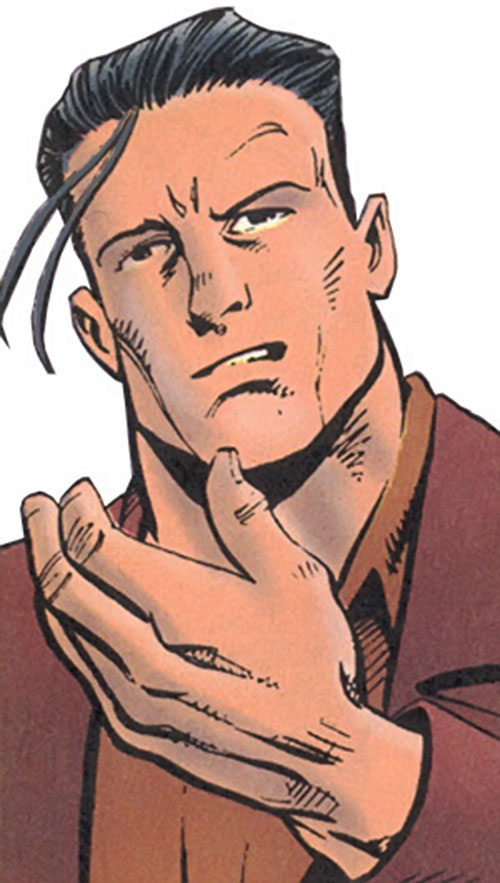