This specific character was part of a RPG campaign run by writeups.org contributor Bil.

Hauler is an immense, powerful mutant.

Hauler is also frighteningly nimble for such a huge man. Before his metahumanity surfaced, he had been training to become a gymnast, and retains much of his acrobatic ability.

In addition, he is an accomplished artist in a variety of mediums, with no handicap from his wrist-thick fingers.

Lastly, he seems to be loved on sight by animals and children, perhaps because of his pure soul.

A young college gymnast, and a newlywed, Sean Aileigh began to rapidly put on weight one semester. He grew over two feet in three months, and reached more than ten times his old weight. His pregnant wife was dismayed, but stuck by him. She died in childbirth four months later, giving birth to his son, Thomas.

When Thomas was one year old, the gentle titan took him for a walk, cradling him in the palm of one hand. Unfortunately, a gang skirmish got Sean and Thomas caught in the crossfire. The bullets simply bounced off Sean’s thick hide, but, before he could shield his infant son, the flying bullets had killed him.

Sean does not remember much about the next ten minutes. Before he calmed down (with the “help” of numerous heroes), he had devastated a large amount of East L.A., and slaughtered the gangbangers.

Sean spent the next three years in a mental hospital. He underwent therapy until his doctors were convinced he was mentally fit enough to make it on the outside world. He had been horrified at the sheer destruction he had caused, and refused to use his powers in a violent manner again.

With no home, no job, and his recent stay hanging over his head, he moved to Denver. Aileigh arrived at the Mendolsson Memorial Hostel for Displaced Metahumans. For six months, he refused to join the New Legion, frightened that he would lose control again.

Finally, Flame Strike convinced him that his strength was needed. Aileigh he saved 42 lives on his first mission, by stopping a runaway city bus. Finally confident that his power could be put to good use, he has become a popular member of the team.

Recently, in the wake of his restored confidence, he has taken a job as a day-care worker. The sight of all sorts of kids climbing on the immense, gentle man has Flame Strike planning wedding bells, although that both frightens and excites him.

An immense redheaded titan, with a gentle heart.

He wears a vest of thick hide straps, thick leather bracers, green pants, and brown boots. He wears no mask.

Hauler is the brick  of the New Legion, and one of the most powerful individuals in the world. However, he never uses more force than is necessary, and refuses to go all-out unless he is certain that his opponent can take it.

He has very little visible scars from his traumatic experiences. But he will sometimes flash back to the moment of his son’s death when he is caught in a crossfire of any sort. At such moments, he stands there, striving to shake the memories out of his mind.

Hauler could be used as a generic brick, something the DC Universe is rather short on. He also could be used along with the rest of the New Legion, and the Mendolsson Memorial Hostel for Displaced Metahumans. 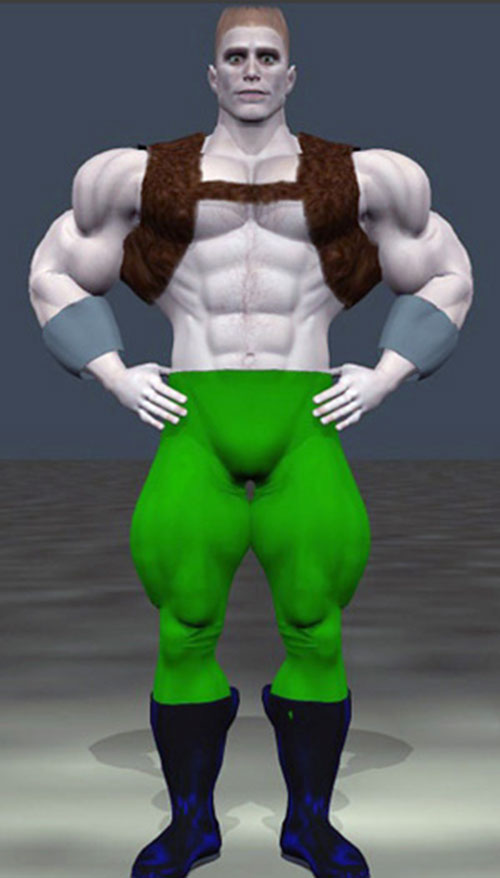