Hawk-Owl is a Batman-esque character who had one storyline in 2002.

He existed in the “Ultimate” alternate version of the Marvel Universe, which has since been destroyed.

Hawk-Owl is a highly trained fighter, extremely agile and acrobatic, and very accurate with thrown weapons. He’s, in fact, one of the top three fighters on the world of the Ultimate Marvel continuity. He is versatile in many of the martial arts and has learnt some sort of Asian pain control technique as well, which makes him very durable and tough.

Jack wears an armored costume with night vision lenses in the helmet, and carries many gadgets. These include bolas, throwing discs and customized handcuffs, as well as a device that makes owls attack on command. He usually travels using a flying car.

Jack Danner’s older brother Joe knocked his own brains out when he stepped on a rake. Then, when Jack was five, his father’s drunken driving killed his parents. Neither tragedy turned him into a tortured, vengeful soul. Jack spent the next seven years in St. Frederick’s orphanage, cared for by Father Joe.

When he was 12, his Aunt Ruth returned from Europe, taking custody of Jack and his best friend Daniel Tolliver, housing them in Danner Manor. Unable to cope with their delinquent ways, Ruth soon accepted an offer from groundskeeper Kwi Chi to raise them alongside his own son, Lee Chi. He taught all three discipline and the martial arts.

One night, Jack witnessed a hawk attacking an owl in the woods, and he raced to the rescue. Afterwards, Kwi stated that Jack was now both the hawk and the owl.

The boys grew up strong and inseparable. Together they won martial arts tournaments, served in the military, and went to university. Jack traveled the world, training under the best fighting teachers in existence. Some of his known teachers are Shaolin Monks, former Navy Seal Mick Hensen, former Delta Force Commander Richard Puller and former Weapon X director Howard Thatcher.

Back in Chicago, Jack decided to do something about the soaring crime rate. He became the vigilante known as Hawk-Owl. He operated out of the Owl’s Nest, a hidden base atop the Manor, in order to clean up the city of Chicago.

Jack began to consider adopting a child, imagining fighting alongside a son as Hawk-Owl and “Woody”. He even had a costume made for the latter. When robbers broke into St. Frederick’s to hide from the police and took children hostage, Hawk-Owl captured them with the assistance of orphan Hank Kipple. Impressed by Kipple, Jack arranged to adopt him.

The cynical Hank viewed his new father with open contempt, unwilling to trust anyone after being alone for so long. Even when he discovered the Nest and Jack’s alter-ego, Hank rejected him. To prove he was serious about being a father, Jack offered to quit being Hawk-Owl. Once Hank realized he wasn’t bluffing, they finally began to bond.

Soon after, the Ultimates tried to draft Hawk-Owl into their ranks; unimpressed by their arrogance, Hawk-Owl came to blows with Captain America and Giant-Man until Thor ended the fight, and the Ultimates departed.

When Hank’s school principal Morgan Jones became the criminally insane Principal and put Jack into a coma, Hank tried to stop Jones as Woody. He ended up in peril before the awakened Hawk-Owl came to his rescue. The duo continue to protect Chicago, dedicated to making the windy city a little safer.

The Hawk-Owl wears an armored costume with yellow night vision lenses in the owl-like helmet. The uniform is mainly colored grey, and covers all of his powerful physique. He wears thick, metallic silver-colored gauntlets, boots, shoulder pads and chestplate.

The eyes of the helmet piece are lit up in yellow light in the night time, both for intimidation purposes and as night sight, giving him the appearance of a large humanoid nocturnal. In addition, he has a yellow utility belt, and a yellow owl symbol with black eyes on his chest.

The picture is completed by a large, brown fur coat that serves as his cloak. Jack Danner, on the other hand, looks like a relaxed man with a smile on his face, three-day stubble and black-grayish hair.

The story of Hawk-Owl and Woody is action and comedy rolled into one. Hawk-Owl and Woody are based on the duo of Batman and Robin, although they are less intense, and very different on a number of points. Below are presented the most prominent supporting cast of Hawk-Owl, with some Batman references so that the GM can role-play them properly.

Jack Danner is a playful man and a child at heart. His happy-go-lucky attitude gives the impression of him being irresponsible, as does his occasional trash talk.

However, Jack has strong feelings of moral obligation and of responsibility. Thus he was deeply disturbed by the soaring crime rates of Chicago, and so decided to take matters into his own hands. Using his fortune and skills, he created the identity of the midnight avenger, Hawk-Owl. Crime fighting also offered a dangerous and expensive, although fun, hobby of Jack’s.

He’s got all the crime-fighting gadgets and the training, but he is not any sort of genius. Still, he has been described as a smart guy that does really stupid things. His main driver is merely to have fun, but also to actually do something about the wellfare of Chicago.

Although Hawk-Owl looks grim, he lacks any sort of traumatic murder experience so common for other similar vigilantes. His drive is thus less severe in some respects, but he will still go out and fight crime every night because he can.

He has cultivated a very confident and intimidating persona as Hawk-Owl, although he is still a horrible speaker and even, in his civilian identity, somewhat socially inept.

Jack Danner is a good judge of character, at least when it comes to adults. He thinks he understands and knows Hank, but he’s got it all wrong. He also has a history of ultra-liberal, near-flag-burning activism and environmentalism. Apparently, the concept of freedom is as important as having fun, and seeing justice being served.

As Hawk-Owl Jack has a very strong personality and presence, looking good even compared to major heroes. In fact, his reputation as a crime fighter and strength of character eventually earned him the attention of the Ultimates who then tried to recruit him. Jack, however, is too much of a free spirit to join in larger group efforts. He seemingly dislikes authority and those that abide by it.

Thus, he instinctively dislikes the likes of Captain America, while he bonds well with the likes of Thor, the environmental activist and free spirit. When he eventually got around to duoing with Woody, his dreams of justice and action were seemingly fulfilled.

“Daniel, check this out. I stopped four burglaries, two liquor store holdups, seven muggings, and one political kidnapping and I’m back before dawn without a scratch.”

“Oh, I’ve got better than guts, Zeb. I’ve got amazing fighting skills ! Serious muscle ! (spak !) Incredibly sophisticated , not to mention, expensive weapons ! (whak !) Body armor ! And a helmet that can probably withstand a nuclear holocaust. (krak !) Guts are practically overkill… but I got those too.” [everybody lies defeated]

“For me to be effective when I’m stopping crime, I need to work alone, in my city, on my terms. I don’t lead, I don’t join, and I don’t follow. Please tell General Fury if that’s unacceptable to contact me personally.” [turning down membership in the Ultimates]

“It’s been real. Thor, come back anytime. Wasp, get in touch when you develop some self-esteem, wise up and dump the psycho. Cap, you’re the greatest fighter I’ve ever had the pleasure of grappling with, but you’re a first class bullheaded jerk.” [endtalk to the Ultimates]

Naturally, Hawk-Owl and Woody are copies of Batman and Robin. In a DCU setting one might as well use the originals, unless Hawk-Owl and Woody instead are active in another time era. They could be relatively unknown predecessors of the DCU team, either in Gotham City or in Chicago (like in the Ultimate Universe).

But it might be better to have Hawk-Owl be a son, or grandson of Dick Grayson, the original Robin, and so being active at a future date, perhaps right before a third world war, setting up a backstory for the world of Hex or Kamandi. If so, the Batman of 2050 found The Owl’s Nest, not the Batcave. 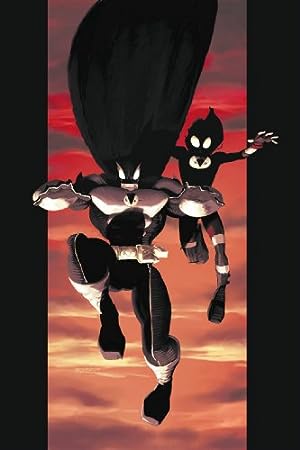 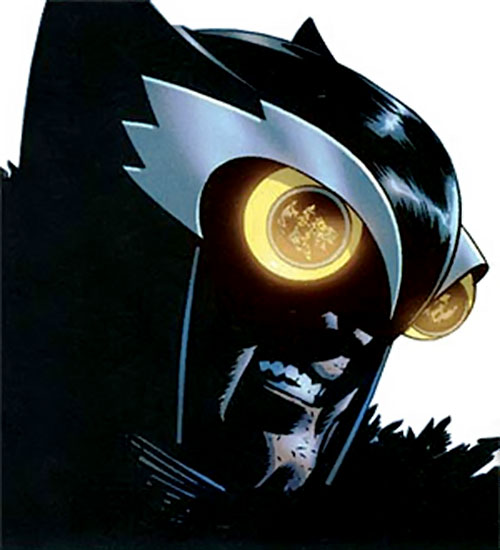 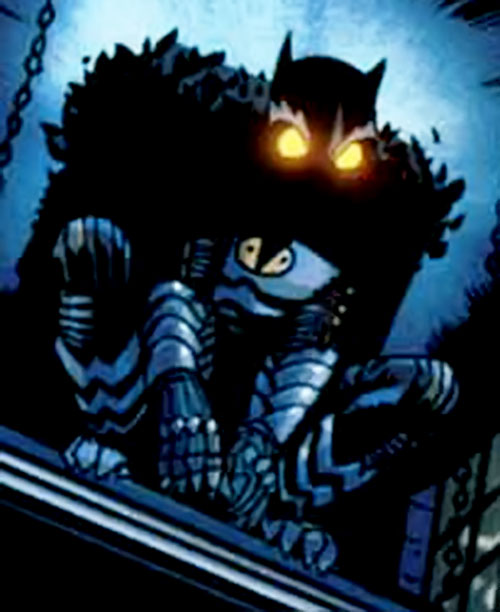 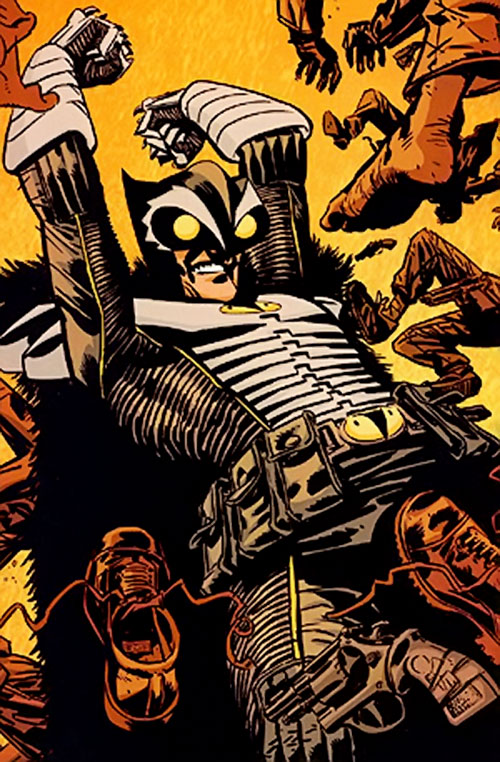