Hawkeye has a scary level of accuracy with thrown objects. He is able to turn anything into a deadly weapon. For instance, naked and bound, he broke his fingernails and used the shards as missiles to kill his captors. He has honed this ability with his archery skills, and uses the bow as his weapon of choice.

He is usually armed with a custom compound bow and a supply of arrows. The only trick arrowheads he has been shown using are one which supplies an electric shock to the target, and ones with explosive arrowheads, which could be set with timers.

He also has extensive military and combat training, being familiar with most forms of modern weaponry. He’s also a capable fighter pilot.

An Olympic archer, and former Secret Service agent, Clint Barton became an operative for US Intelligence. He was an early member of the S.H.I.E.L.D. organization alongside Nick Fury, when it was a small, poorly funded operation. He took part in a number of covert operations around the world. Thus, Barton was present at the fall of the Berlin Wall, and during critical operations in both Kosovo and Afghanistan.

He managed to establish a life for himself. Barton lived for years with his girlfriend Laura, whom he recently married, with whom he had three children: Callum, Lewis and Nicole. He would phone them before every mission to tell them he loved them, in case it turned out to be his last.

He rose to become an elite agent of the agency’s Black Ops division, recently working alongside the Black Widow, Quicksilver and the Scarlet Witch as a covert branch of the Ultimates. They were among the first of the group to be made aware of the covert Chitauri invasion. They acted against them, wiping out two Manhattan office buildings filled with disguised Chitauri.

With the scope, and budget of the organisation expanding, the covert operatives were moved over to the public team. Thus, after some background changes to hide the less media-friendly operations, Hawkeye became a public figure.

He was with the team as they drove off the Chitauri. He worked in an Ultimates unit alongside Captain Marvel and members of the Fantastic Four against a threat posed by the Kree. He took part in the group’s controversial disarming of ’rogue‘ states nuclear weapon capabilities.

Shortly after Thor was framed as a mole in the team, the real mole — the Black Widow — led a foreign black ops unit into Barton’s house. They murdered his wife and children, his son Callum dying in his arms. They took Hawkeye prisoner, but with enough blood left at the scene for him to be believed dead.

He regained consciousness days later. The enemy had used drugs to obtain Triskelion security codes from him, and used these to allow the Liberators superhuman army to defeat the Ultimates and gain control of the country.

Breaking free, he killed his captors, and made his way to Washington. Helping free the other Ultimates, he joined the battle against the Liberators, eventually beating them, and freeing America.

After their victory, he tracked Black Widow to a New York hospital where she was convalescing after the state Iron Man had left her in. She tried to flee, but he pinned her wrists to the wall with arrows, and sent another through her head.

The Ultimates decided to become an independent organization, but it is unknown whether or not Hawkeye will join them.

Professional and focused, Hawkeye is a dedicated soldier and a conscientious leader. He is slowly acclimatising to the new role he’s finding himself in.

He is not entirely comfortable working with untrained operatives (such as when he had to work with Mr. Fantastic and the Invisible Woman). Thus he has a tendency to see them as needing protecting, which can make him somewhat abrasive with them while on operations.

Outside of missions, he was fairly easy-going. He enjoyed spending as much time as he could with his children, and saw his job as making the world safer for their future. How he will eventually react to their loss is, as yet, unknown, but they served as the centre of his world, so he’s likely to undergo serious changes.

Nick Fury: “What are you smiling about ?”
Hawkeye: “All this. What do you think ? A few years back, S.H.I.E.L.D. was just you, me and a drinks tab trying to bring down the Soviet Union. Now you’re sending thunder gods up against aliens and telling Captain freakin’ America what to do. It’s just too cool for words.”

“I just flew in space and now I’m on an alien spaceship and my stomach’s acting up. This’d be the romance of being one of Nick Fury’s big-deal super heroes I was told about.”

Bonuses and Limitations:
Projectile Weapons requires him to have some object at hand which he can throw. It can also be used on his arrows (-1)

Prior to their murder, his family gave him the Dependants Drawback.

It’s unclear whether or not he has vision problems. He’s usually wearing glasses, and at one point a vague comment is made about him not seeing something clearly without his glasses, but this hasn’t been clarified, and it doesn’t seem to affect him much, so I’ve left it out. 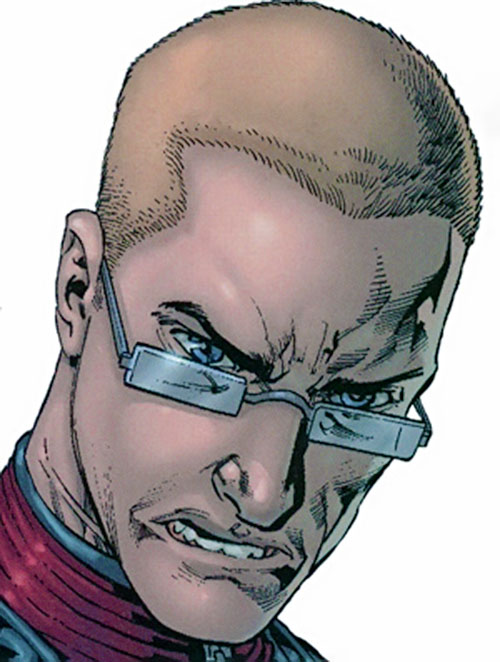 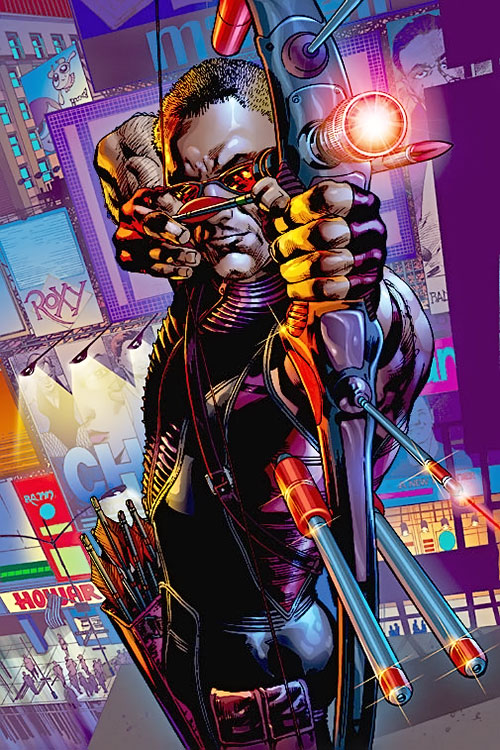 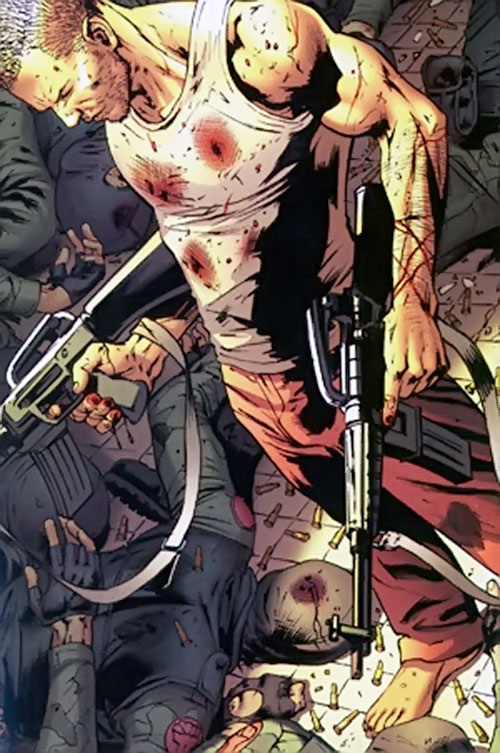