Although his flight ability once stemmed from artificial wings he wore on his back, this incarnation of Hawkman appears to actually be part man and part bird.

With his wings he is able to fly at incredible speeds, and he can generate gusts of wind capable of moving large boulders.

I’m not even going to begin to try to unravel the whole Hawkmess here. This Hawkman, while he is the Thanagarian Katar Hol, seems to be the embodiment of the Hawk Avatar, combining all aspects of all Hawkmen into one big continuity blurring nightmare. Anyone who has read the Hawkbooks regularly is welcome to take a stab at this one.

I have lowered his intelligence and removed his more science-fictionesque elements to reflect that he is more animal than human now.

In Kingdom Come, Hawkman is operating out of the Pacific Northwest, engaging in behavior some would call “eco-terrorism”. In the novelization, he systematically destroys a logging facility, throwing around back hoes and destroying pulping vats with a single blow of his mace. He is brutal and savage when something stands between him and the earth he protects.

Hawkman did not survive the final conflict at the Gulag depicted in Kingdom Come. Howbeit, he is alive in the The Kingdom timeline , and for some unfathomable reason able to shoot energy blasts. But from what I know of the Hawk Mythos, this simply means another Hawkman should soon rise to take his place.

This is a Hawkman you don’t want to mess around with. From the Kingdom Come novelization :
“He was a man the size of an ox, with golden wings three times as wide as he was tall. With cabled arms he held the mace as with the wings he held the sky. What looked like a feathered helmet came down over his face, but there was no gap between what seemed to be a decorative hooked beak and his chin. Then the beak opened and out of it came the loudest, shrillest, most horrendous cry ever to crease an earthly sky.” (p. 69)

This Hawkman also wears a very Egyptian looking necklace, indicating that there are connections to the Golden Age Carter Hall.

Hawkman is a being of few words and great action. He is brutal and destructive when it comes to threats to the environment, but he is careful not to endanger human life. 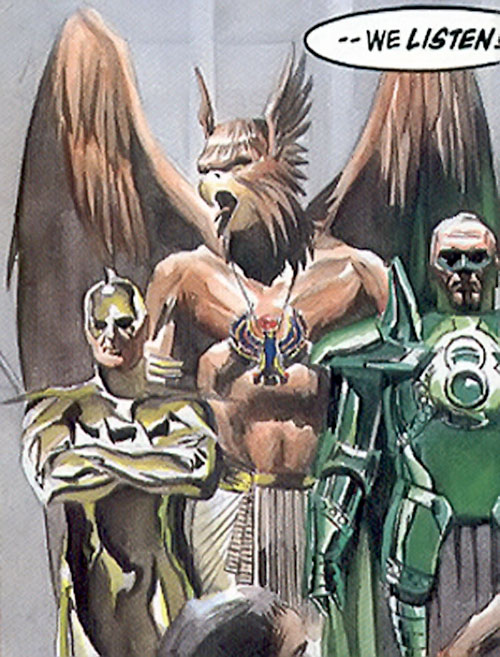